As admins become more familiar with and reliant on PowerShell scripts in the environment, managing, securing, versioning, and controlling the use of PowerShell is increasingly challenging. ScriptRunner is a platform that can be seamlessly connected to the existing environment via REST API. It provides management and control around using PowerShell scripts in the environment, allowing even nontechnical users access to the information supplied by PowerShell via an automatically generated GUI. The latest ScriptRunner Portal Edition R4 release offers many new enhancements to the platform.

It allows organizations to automate and delegate the delivery of routine activities and tasks, providing guardrails around running PowerShell to monitor and control how users can run the scripts, which systems they can target, and which modules they can use.

ScriptRunner continues to streamline the installation and configuration of the product. To get up and running with ScriptRunner Portal Edition R4, you need to download the ZIP file, extract the executable, and run through the installation wizard. This process takes only a couple of minutes.

Ensure you have the IIS role installed in Windows Server, and then run the installer. 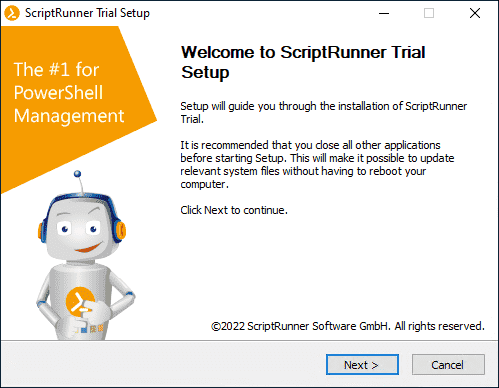 Configure the service endpoint for the web apps to connect to the central service of ScriptRunner. It defaults to the FQDN of the server name. 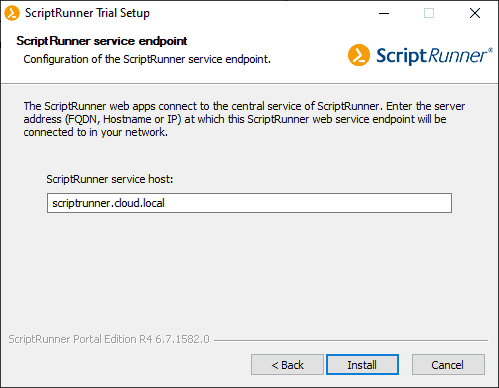 Set up your service endpoint FQDN

After the files are copied, the installer finishes, and you are ready to begin configuring your instance of ScriptRunner (setting up credentials, targets, etc.). 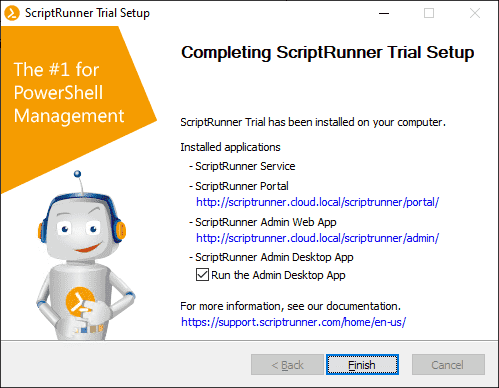 Finishing the installation of ScriptRunner

The new ScriptRunner Portal Edition R4 release is massive in terms of functionality, features, and capabilities. ScriptRunner describes R4 as a milestone in their Portal functionality. This release has streamlined the user interface with a more modern design and workflow.

Let's take a closer look at some of the main new features found in the ScriptRunner Portal Edition R4 release.

With the release of the ScriptRunner Portal Edition R4, the previous Portal Apps solution has been eliminated and replaced with a new design. In addition, the new Portal is based on a new underlying information architecture. The application has been dramatically simplified, providing many benefits to the experience. For example, users now have more clarity regarding the interface's controls, menus, and other items.

ScriptRunner has been redesigned to help the product's overall experience and usability in the R4 release. The new Portal has been designed to contain the latest reports, top actions, and pinned actions in a widget-styled interface. In future releases, you will be able to customize widgets and other features of the dashboard.

New "foldout" menus on the left-hand navigation menu have been added to allow users to easily drive the interface from the dashboard.

The new main Run area has a significantly revised look and feel. In addition, it is much easier to navigate thanks to a back button and breadcrumb-style navigation trail to allow moving back and forth. The Run tiles seen in previous releases now have a modern design and new, reduced, and simplified options. 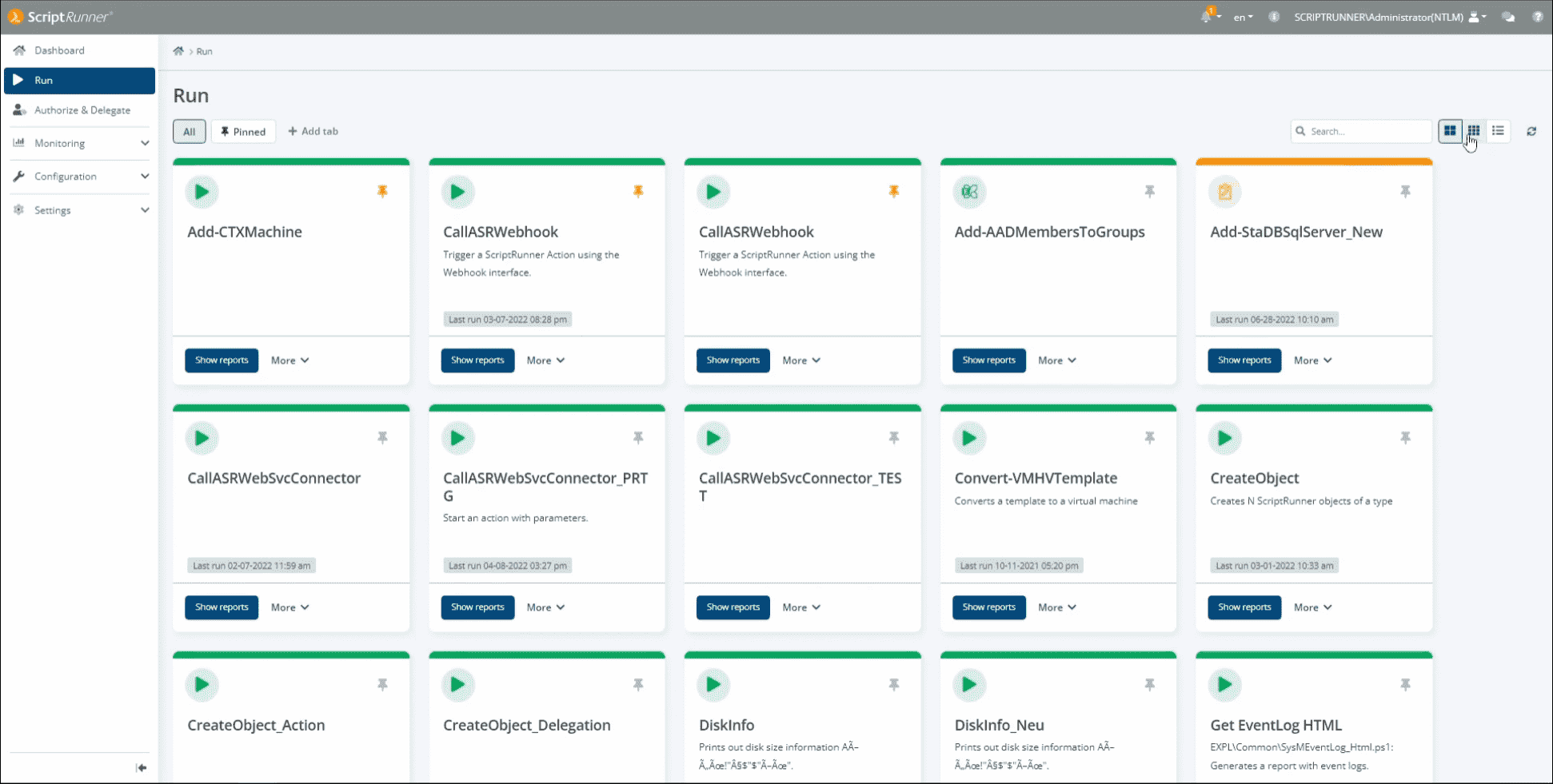 The list view shows the color, icon, and pin status of actions. 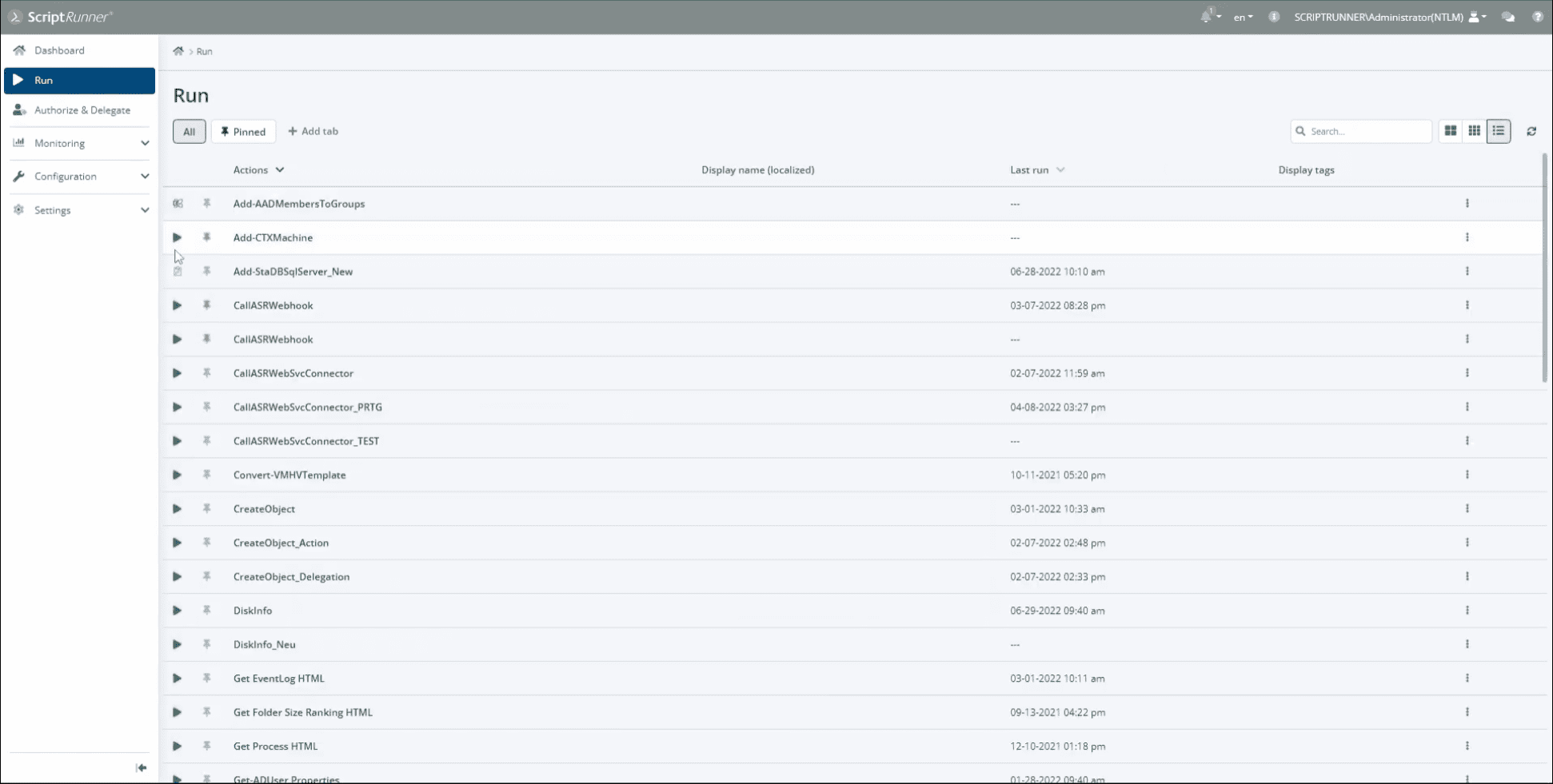 In addition to the new credentials UI, they have added the ability to use SSH key file authentication for PowerShell, which is becoming an excellent option for connectivity in PowerShell 7. 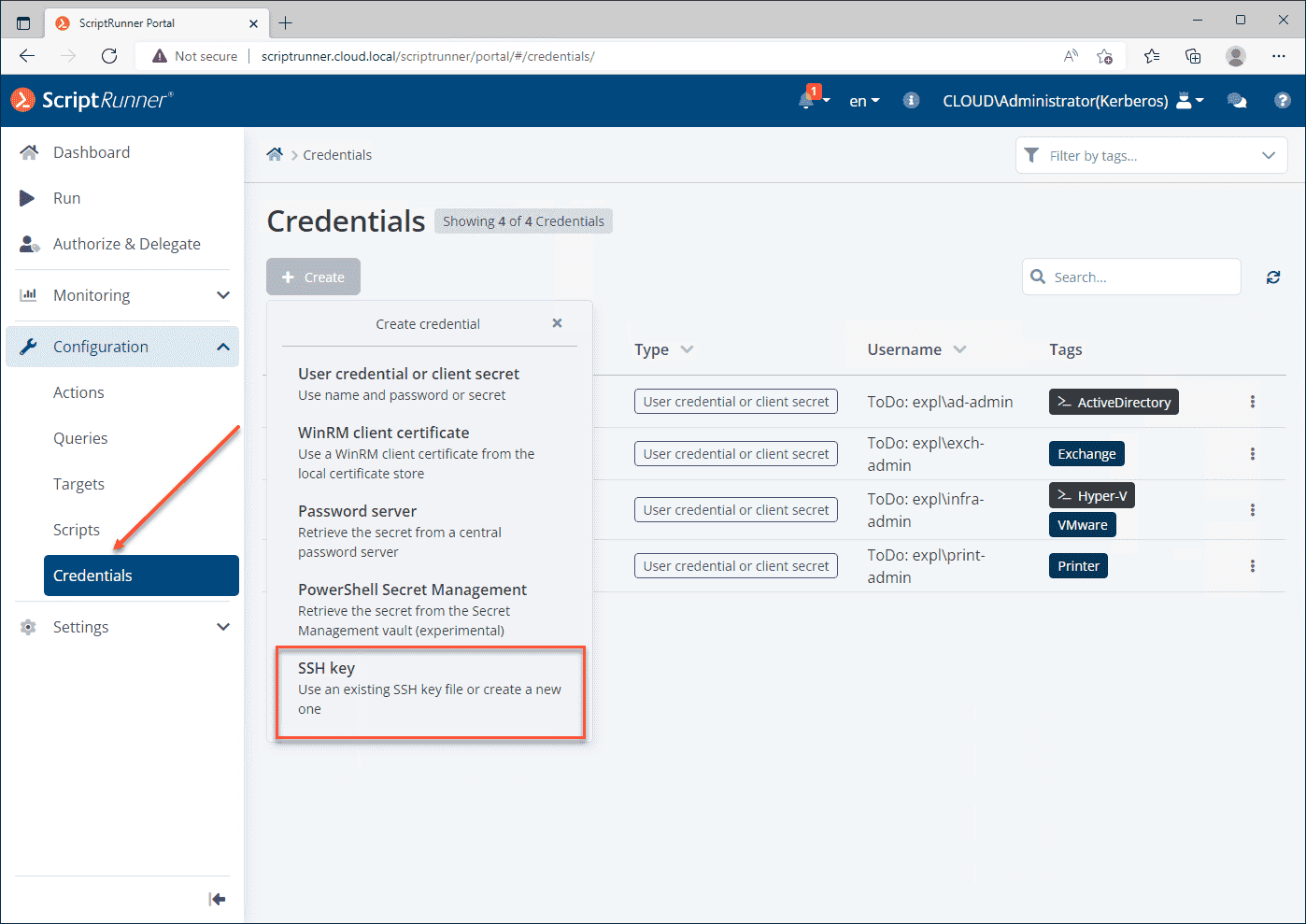 New target configuration in the Portal 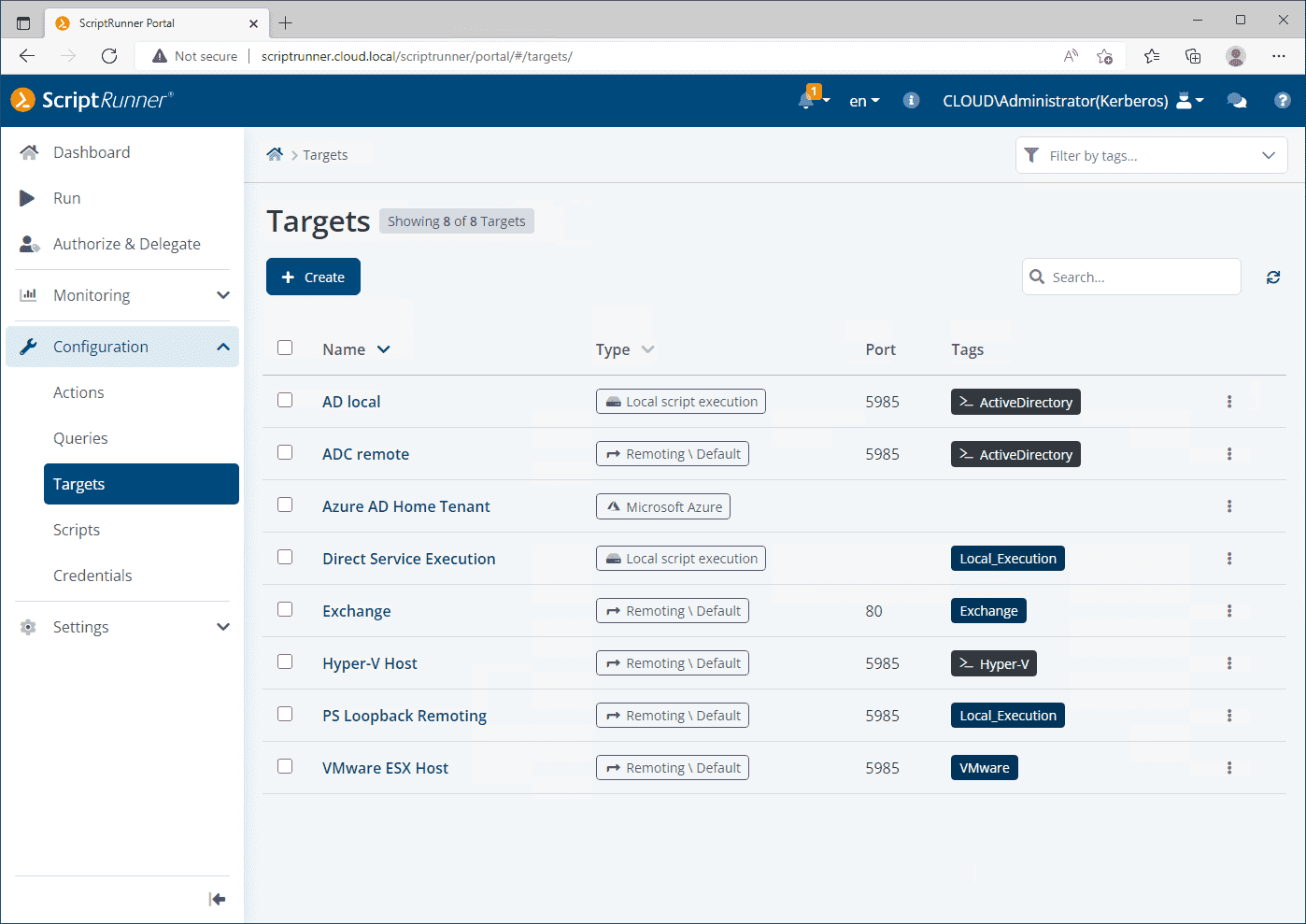 A great feature of the new ScriptRunner Portal Edition R4 release is the automatic detection of the required PowerShell modules for scripts. ScriptRunner evaluates the modules needed and checks to see if they are available in the PowerShell session before starting code execution. This prerequisite check will save time and errors during the script execution process.

ScriptRunner takes this a step further and automatically creates tags for what they refer to as "advanced testing" of a PowerShell target. It performs the following: 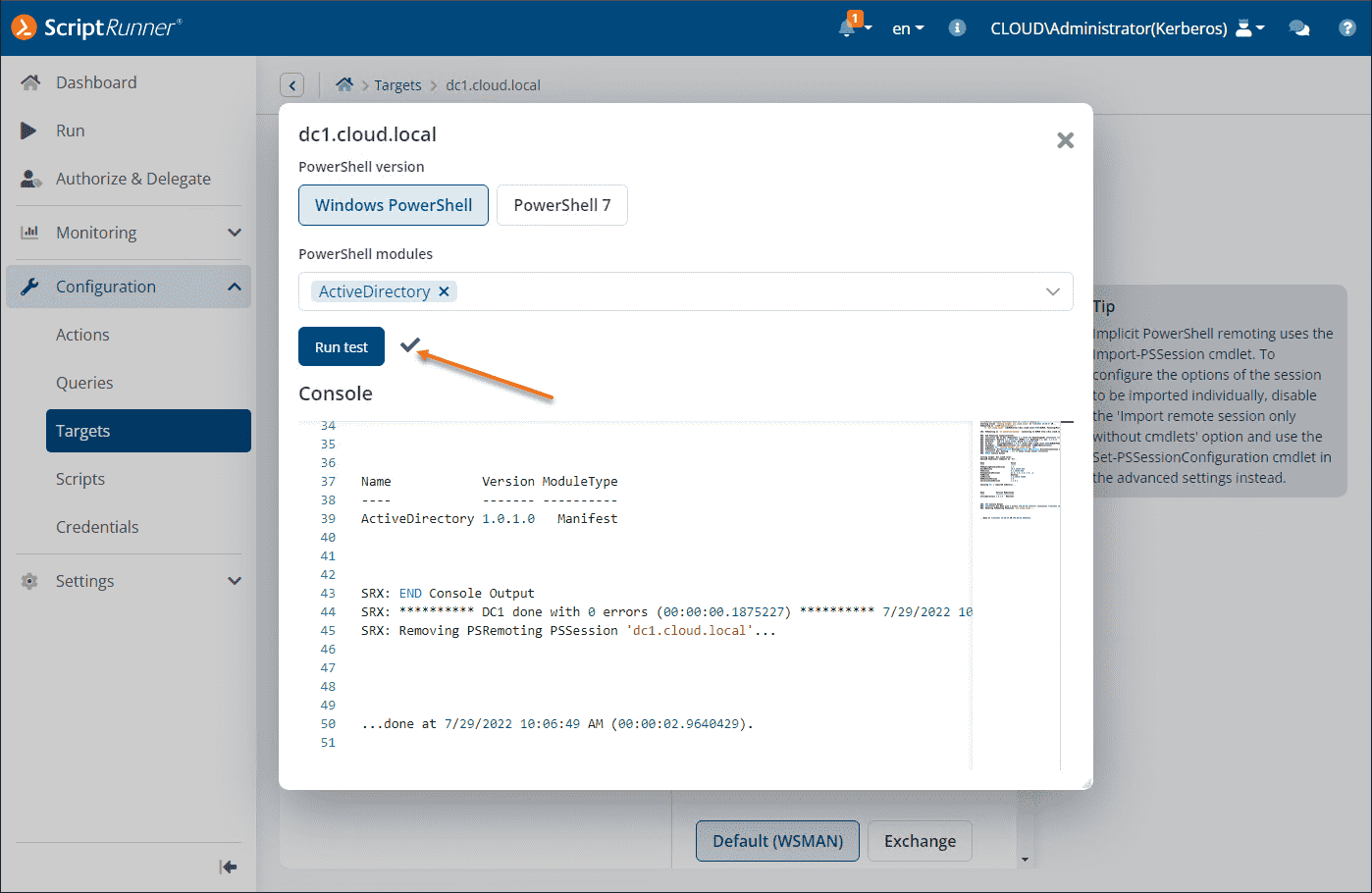 Use Microsoft Graph and token-based authentication for M365 services

Microsoft Graph is the global gateway for programmatic access to the data contained in your Microsoft 365 environment. The Microsoft API provides a single endpoint for access. In ScriptRunner Portal Edition R4, you can now use the Microsoft Graph module with the M365 service. In addition, you can now add this to an existing M365 target or a newly created one.

ScriptRunner Portal Edition R4 is also keeping up with the new recommendations for logging in and using services in M365. The new token-based authentication removes old references to the AAD Graph in the background and now uses a more modern, secure method.

In ScriptRunner, automatic detection has been enabled for M365 targets that determines the method to use and automatically selects the appropriate one. 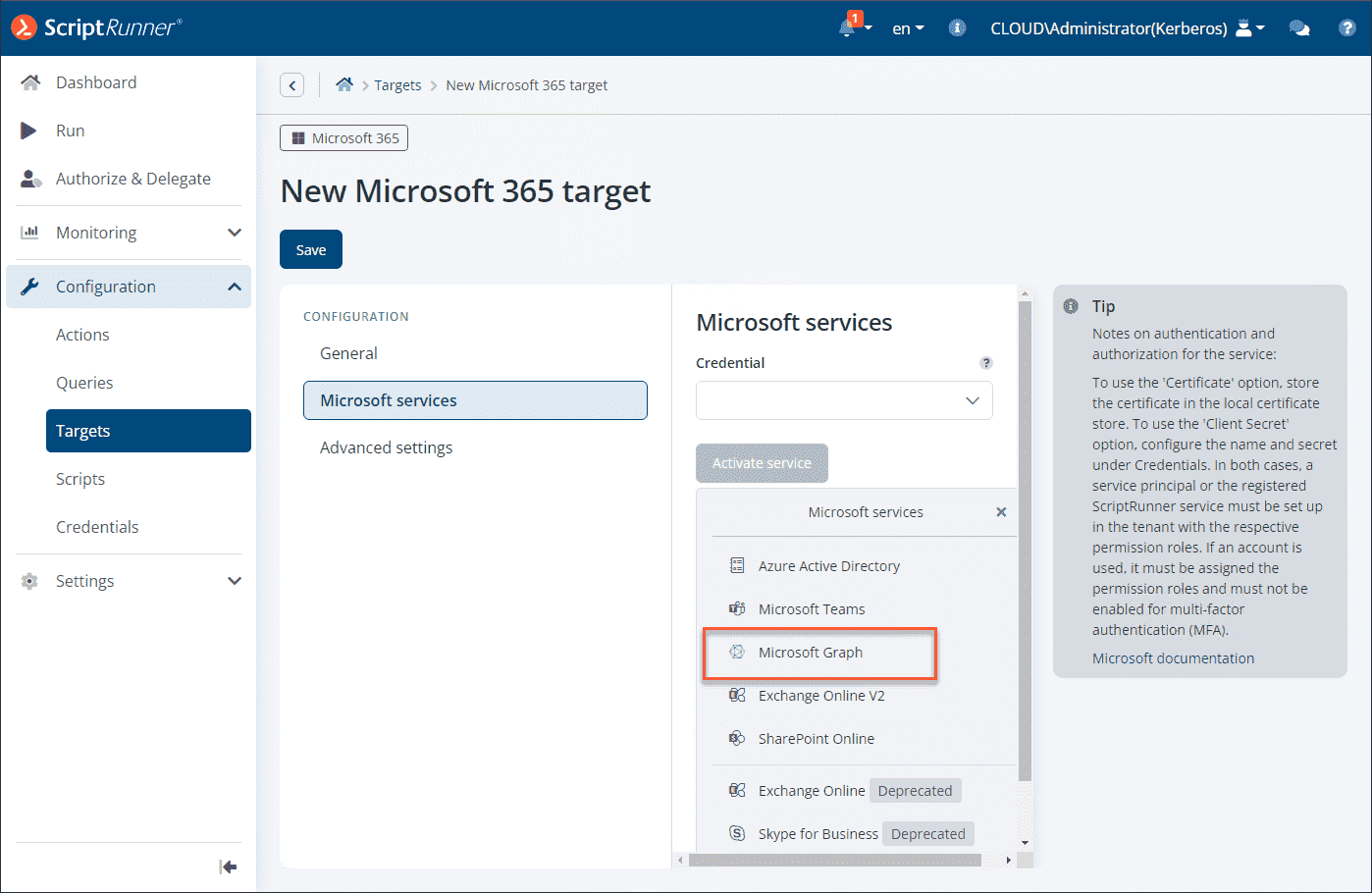 Microsoft Graph can be used as a new service for M365

Upload of files by users for bulk processing

Users can now use a record file (CSV, TXT, XML, or JSON) to pass a data stream as a parameter in a script. Using the upload as a data stream provides maximum flexibility. Multiple data set files can be used, and separate data stream parameters are used for each one.

ScriptRunner Portal Edition R4 now allows enforcing signed PowerShell scripts, no matter how the local PowerShell execution policies are configured. It helps enforce signed scripts on both the ScriptRunner server itself and in PowerShell remoting.

To implement this with ScriptRunner Portal Edition R4, you simply run the following PowerShell cmdlet:

Impressions of the new ScriptRunner release ^

I have followed ScriptRunner's progress over the last several releases. The ScriptRunner Portal Edition R4 release is massive, including a ton of new features and capabilities. I like the direction that ScriptRunner is taking the product with great usability features, better workflows, better M365 integration, and tools to enforce security best practices, such as signed PowerShell scripts.

You can download a fully functional 30-day trial version of ScriptRunner to test the features and capabilities in your own environment.