Paul Schnackenburg  Wed, Dec 28 2011Tue, Jan 24 2012  monitoring, system center  0
In this final part of the eight part technical review of SCOM 2012 we’ll look at the new dashboard functionality and how they can be displayed in different environments, including SharePoint 2010 and we’ll add some final remarks around SCOM 2012.

While monitoring systems like SCOM collects vast amounts of data, it’s not a matter of collecting the data; it’s a matter of filtering and displaying the right data to the right people at the right time.

There are three primary ways of doing this, you can have alerts that tell you that something is wrong and needs attention, reports showing historical data and dashboards that show actionable, real time data in a visual fashion that can be personalised.

Whereas earlier versions of SCOM had Views and simple dashboards, SCOM 2012 takes it to a whole new level. No longer do you need to group objects before creating a view and the new wizard for creating dashboards makes it very easy to display exactly the right information in the right way. There’s no programming necessary to create your own dashboards.

The wizard is available in both the native console and the web console and the resulting dashboards can be displayed in the Console, the Web Console and SharePoint 2010 (see below) and they look identical in all three environments. SCOM 2012 can have nested dashboards where drilling down into particular data lead to another dashboard. 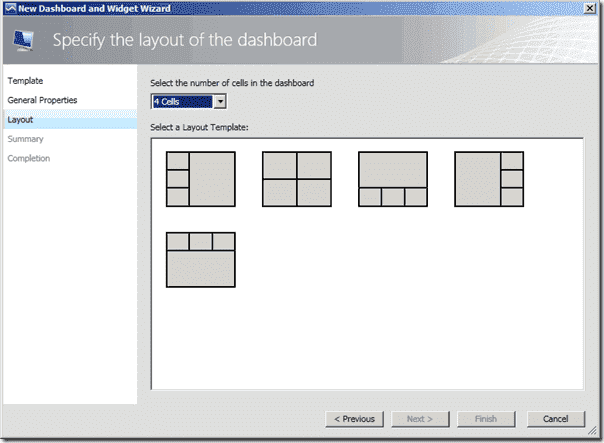 Creating custom Dashboards is not only useful, it’s also very easy with the new wizard.

There are three steps to creating a dashboard in SCOM 2012: first select a layout based on the number of cells or columns desired; then add a widget in each cell (types include Alert, Performance and State) and finally configure each widget with a particular scope and criteria as well as display preferences. The Performance widget can now display data from either the Operational or DataWarehouse databases; increasing its usefulness. Apart from the comprehensive built in dashboards third party management packs can add feature packs to support their own widgets. Both SQL Server and Hyper-V have dashboards in the works. 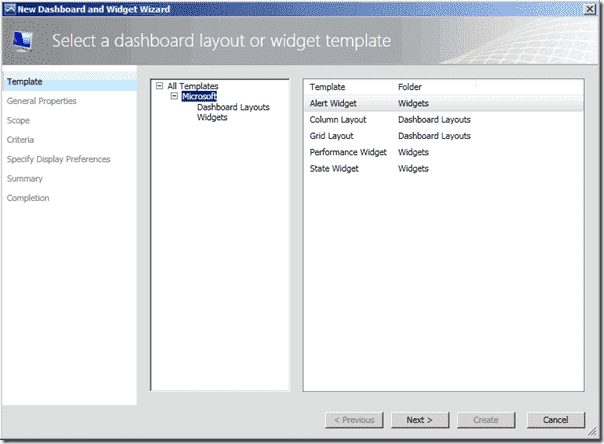 For each cell define what widget you want and configure it’s properties.

To extend the reach of SCOM to non-IT personnel dashboards can now be integrated into SharePoint 2010 using a web part. If the people who are going to view the dashboards aren’t SCOM users the web part can be configured to user shared credentials. The integration works with SharePoint Server 2010 Standard and Enterprise as well as the free Foundation version. In the latter case you can only deploy the web part in the same domain as the web console and you won’t be able to use shared credentials.

The web part comes in the Microsoft.EnterpriseManagement.SharePointIntegration.wsp and is installed using the install-OperationsManager-DashboardViewer.ps1 PowerShell script. The web part is linked to a web console so you’ll need to obtain the exact URI for the dashboard you want displayed by navigating to it in the Web console and copying it from the address bar. If you get an error message that the ticket has expired you need to synchronise the clocks on the server running the Web console and the SharePoint server, they can’t be more than five seconds apart. 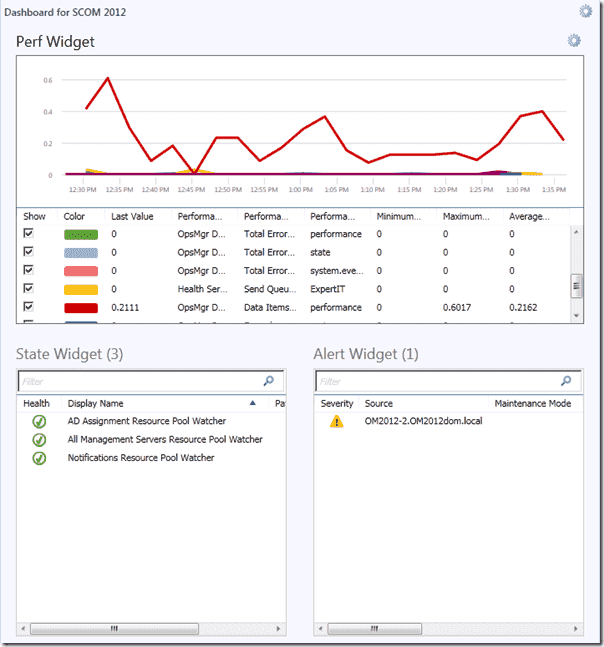 The final dashboard in all its glory, best of all it looks the same in all three environments.

Personalisation of dashboards by a user are now stored in the database and thus roam with the user to different PCs and environments, in SCOM 2007 R2 they were stored in the registry on the local machine and thus didn’t follow the user. Dashboards in the web console all have a distinct URL, this also makes it easy to disseminate information to non-technical users, as they can simply bookmark particular dashboards.

The most popular built in dashboard might be the new Management Group Health Dashboard console, also known as the “coffee break”, so named by the developers because it’s designed to give SCOM operators a quick overview of the health of their environment, thus answering the question “can I take a coffee break?”. It monitors both the infrastructure and the functions delivered by the SCOM system.

Although there’s no native support for Windows clustering and we’d like to see deeper monitoring of clustered Java applications in JEE overall SCOM 2012 is a thorough revamp with some very useful new features. The simplified infrastructure and no-brainer High Availability will be welcome in all but the smallest environments while the network monitoring should make all IT Pros troubleshooting lives easier. The extended *nix monitoring and JEE monitoring will be handy in the right environment but perhaps the most intriguing feature will be seeing how SC Orchestrator will glue the entire Systems Center suite together.