Because a modern enterprise is heterogeneous SCOM sometimes needs to integrate with other monitoring solutions such as IBM Tivoli, HP OpenView and others. In SCOM 2007 R2 this is accomplished with connectors, but these are not supported in SCOM 2012. The integration between SCOM and other management systems will now be accomplished through System Center Orchestrator 2012.

The different programs in the System Center suite are essentially different applications with little integration in the current version. System Center Orchestrator 2012 is about to change this in the 2012 wave by providing Integration Packs (IP) for each of the major Systems Center applications including SCOM. The SCOM IP can create and interact with Alerts and Monitors as well as start and stop maintenance mode.

There’s also IPs for System Center Service Manager (SCSM) that can create incidents automatically based on alerts in SCOM for instance; the IP for System Center Virtual Machine Manager (SCVMM) will push information about VMs, services, private clouds and hosts into SCOM. In a future review here at 4sysops we’ll look at this approach for integrating the System Center suite and if it’ll provide the tight glue that many have asked for.

The good news is that SCOM now comes with full PowerShell 2.0 support and a host of new cmdlets. The less good news is that there will be a learning curve as the new cmdlet nouns have “SCOM” in their names; the old cmdlets still seem to work however. There are also new cmdlets for monitoring Unix and Linux machines (see part seven), these rely on PowerShell 3.0 (in CTP at the time of writing) for easy scripting and background operations.

To execute PowerShell cmdlets you have to establish a connection to a management group, this can either be persistent so you can run multiple cmdlets or a temporary connection allowing you to run a single command.

A new cmdlet that might come in very handy is Export-SCOMEffectiveMonitoringConfiguration that looks at a specific monitored instance (or a list), finds the monitors, rules and overrides that apply to it and exports the effective monitoring to a csv file. 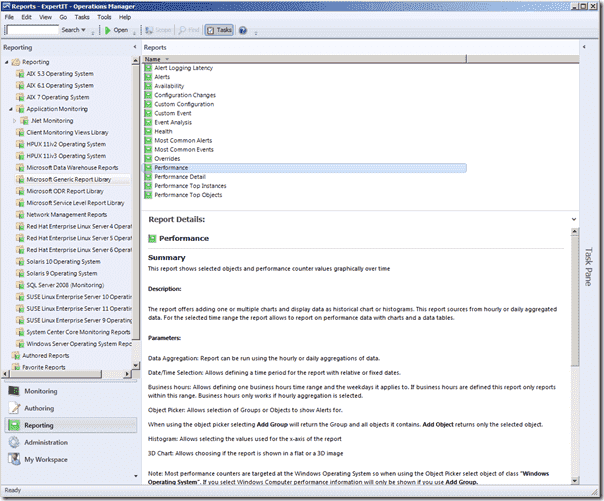 The main console in SCOM 2012 follows the familiar System Center look and is easy to work with.

Sysadmins familiar with SCOM 2007 R2 will feel right at home in the console, apart from some cosmetic changes (the “Actions” pane is now the “Tasks” pane and is split into two tabs, one for actions and one for help) it’s almost identical. The Web console on the other hand has received a major Silverlight overhaul and is now a joy to work with. Note that the Web console provides a monitoring workspace only although you can create dashboards in it with the same functionality as in the full console (see part eight) .You’ll need a 32 bit version of Word 2010 to edit custom information in the Knowledge Base, Office 2010 x64 won’t work.

In the next part of this series we’ll look at the flagship feature of SCOM 2012; built in High Availability as well as how the new Resource Pools work.