A Windows update breaks a server. This is not the start of a joke but a repeating piece of news we see every few months. When it isn't a Windows update, it's some application deployment or update causing issues. Those who do not update are in a worse situation—just ask anyone infected with WannaCry. When stuck between this rock and that hard place, what options do we have? Among your better options are SCCM and Group Policy update rings.

Those eager for new updates get the builds first. Consumers receive the refined builds next. Finally, businesses receive stable builds. Implementing internal update rings is fairly easy. To get it right the first time, let's accurately map out our update rings. 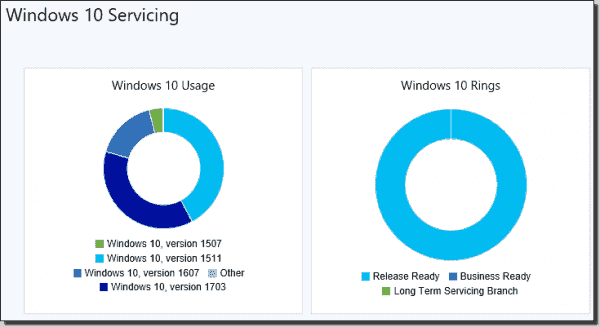 Start building your own internal update ring structure by mapping out your device structure. Get an accurate device count for your organization. SCCM client counts, PowerShell Get-ADComputer queries, or tools like OldCmp can provide this data. This count should include a total along with the individual computer names.

Divide this data into two subsets: one for servers and one for clients. You will likely want tighter update schedules for your servers as they have shorter maintenance windows. It will be easier later by having a separate ring build for them now.

Think about the negative impact a bad update would have on your devices, and group each subset by that impact. Divide each subset into at least two, preferably three, groups.

Although I used the term servers above, this same methodology applies to server groups or application groups. For example, you may put the domain controller (DC) with the primary domain controller (PDC) emulator role in Server Group 3 and all other DCs in Server Group 2. You may also find that you need just two groups or that you may need groups between ordinary servers and mission-critical servers.

Keep in mind differences that may cause an update to break a server. If all of your mission-critical servers run 2012R2 but your least critical servers run 2016, you need to rework your groups. This is also true for hardware; ensure there's representation for most or all hardware types across your update groups.

Client grouping takes place in a similar manner. Your initial update group may contain machines not used often. You can pull this information from the lastLogonTimestamp Active Directory (AD) attribute or from the heartbeat log in SCCM. Below is a sample PowerShell script:

The initial group may also contain computers from tech-savvy departments or those belonging to attentive users. These users are likely to spot problems sooner. With any setup, ensure that your first group contains a representation of your overall environment. Above all, design the setup that fits your environment.

As stated at the beginning of this guide, update rings are a methodology for managing updates and reducing risk. They are not a fancy piece of technology that is difficult and expensive to implement.

After mapping out your groups, create an organizational unit (OU) named something like Software Updates. In this OU, create a security group for each mapped group detailed in the section above. It might look something like this: 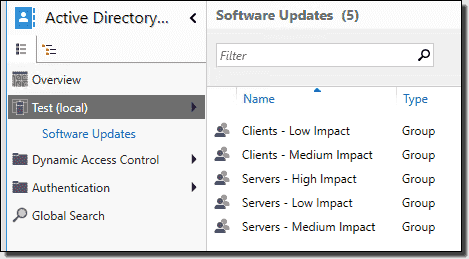 These groups would link to collections in SCCM or to your other management tools. However, you set up the groups, aim for universal use. These should apply to OS, hardware, and application updates. For example, you might use SCCM for Windows Updates. You would create an automatic deployment rule (ADR) for each group and stagger the availability and deadline times.

Your low-impact group may receive updates the day of release, medium a week after, and high within two weeks. You can adjust that schedule to fit your environment, but be wary of extending important updates too far into the future. WannaCry taught us that lesson as well.

Finally, configure these groups to be as self-sufficient as possible. Use tools with scheduling, like ADRs, to automate deployment times. Use PowerShell or a similar tool to turn those groups into shadow groups. For example, your low-impact client group could derive from an AD query that looks at OU membership plus 21 days of inactivity.

A proper implementation of update rings takes a lot of up-front planning. After mapping them though, you can install future updates with less risk in a timely manner.

Leave a reply to Joseph Moody (Rank: 3)
Click here to cancel the reply