David Stein  Fri, Jun 14 2013Fri, Jun 14 2013  system center, systems management  0
Scripts are very commonly used to 'wrap' vendor installation packages and perform additional tasks to achieve a comprehensive desired installation result. For example, script code can perform preparation tasks before running the vendor installation, as well as post-installation tasks. There are hundreds of possible reasons for using scripts to assist with the automation of a deployment through Configuration Manager.
Contents

Along with the added flexibility and control scripting provides, there are also added risks. The risks are increased because you (or the script writer) are more likely taking over control of the execution sequence, as well as taking control over the passing of the final result "code" (i.e. "exit code") back to the Client agent. The exit code is what the Configuration Manager Client reports back to the Management Point for aggregate status reporting.

It's possible within a script to launch one process and then launch another without waiting for the first process to complete (asynchronous). If the first process forces an immediate reboot, it could terminate the completion of subsequent processes and may interrupt event reporting (exit code returned to the Configuration Manager Client process).

In general, it's usually preferred to run each process serialized, to allow for evaluating the exit code (result status) before continuing on to the next. In most cases, if one process fails to complete successfully, you wouldn't want to continue on and launch the next one, at least not without performing some additional actions first.

If you do not have the luxury of owning a license of AdminStudio or InstallShield, fear not, there are workarounds. One such workaround is scripting. You can use the COM interface to monitor the Windows Process stack and effectively make your script code "wait" until a specific process terminates. This method goes by many names, such as "loop and wait", "watching the clock", or "rock and roll" (I'm sure there are many others).

Here's an example using VBscript that watches for a process named "acme_setup.exe" in the Process stack. If it finds it currently running, it uses a WMI event monitor to wait until it's terminated and then moves on:

Some of you may be wondering how you would use this in a real world situation. Let's say you need to launch a vendor installer and wait for it to complete before continuing. Maybe you'd like to be sure that it actually completed successfully so that your next step is doing something to the results. For example, maybe after the installation finishes, you need to overwrite some configuration files in the installation target directory, or update a particular set of Registry key values. It wouldn't make much sense to attempt either of those tasks if the installer failed (or never ran at all).

Note: The example shown above is not intended for production use, but merely to demonstrate one possible method for monitoring a running process until it terminates before continuing on with script execution. Test thoroughly before using. Use at your own risk.

Scripts that use the Windows Scripting Host Run() method (Wscript.Shell object), should specify the third parameter as True (wait for completion), rather than False (do not wait). Here's a short VBscript example:

One of the most common scenarios where I've seen this happen is where the programmer decides to use an evaluated variable for the third parameter which is derived from a condition. In cases where the condition sets the variable to False (or any "non-True" result) it will effectively run the shell process without waiting for it to complete before moving on. It's always best to use an explicit True or False (preferably True).

When using the START command within a BAT or CMD script, be sure to include the /WAIT parameter, but keep in mind that whatever is being launched will control the behavior of the "wait" condition. This means that using "/WAIT" is not a guarantee it will "wait" for the entire process to finish. In other words, and this is very common: If you launch an installer utility, and it in-turn launches sub-processes, but exits from the call stack while the sub-processes continue running, the START command will only see the first process (the one it called) as completed, and continue on. The best way to insure this doesn't occur in your script is to follow the two rules below:

One more note of caution

As with the potential "wait" issue described above for Command Shell Scripts, the same may be true for the WSH Run() method. That's right. Not because it won't actually "wait" for the process it launches to finish its job, but because that process may in-turn launch other processes asynchronously. In fact, this is not uncommon for processes that create and start Windows Services. The only way to effectively verify this condition is to monitor the process stack in a test environment.

Tools like Sysinternals' Process Explorer, Process Monitor, PSLIST and so forth can be of enormous help in identifying and monitoring such branching of processes. The first figure below shows PSLIST in action using the -T option (tree-view display). The figure below that shows Process Explorer monitoring a slightly more complicated process tree. 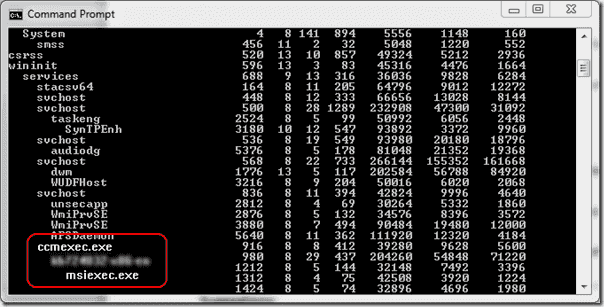 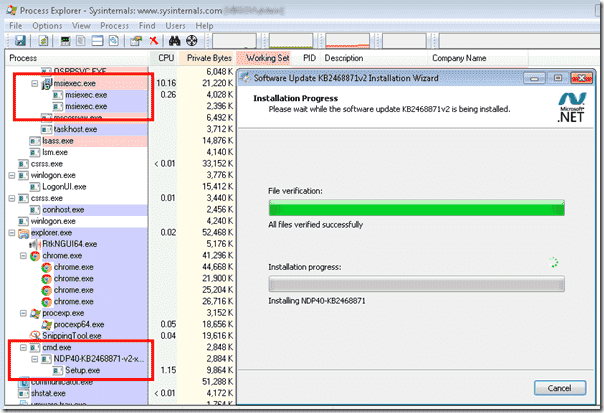 In the Process Explorer example above, the installation of a software product is initiated with a .CMD script. The script first checks if Microsoft .NET Framework 4.0 is installed, and then checks if a required update for .NET 4.0 is installed. Not having detected the required update, it then launches the installer (the nested process with name that begins with "NDP40-KB2468871…"), which in-turn extracts a payload of installer binaries, and then launches the installation itself using a "setup.exe" file. The "setup.exe" file in-turn runs a series of Windows Installer packages (the "msiexec.exe" processes highlighted above).

I could have scoured through the vendor's installation logs, and hours and hours of picking out which log caused which other process to launch and then find its log and continue on. But seeing the "real time" processes unfold before me not only saves time, but immediately points me in the right direction.

The point of this example is to demonstrate that without the proper tools to diagnose and catch this type of scenario, it can be extremely difficult to accurately trace what's really going on with an installation sequence. Any nested process can encounter a problem that can cause the entire sequence to fail, or worse: partially fail.

This is why it is absolutely crucial to include as much status logging as possible throughout every script. I cannot emphasize that enough.

My personal recommendation is to print out a statement of what the next step is going to do, and how it will try to do it, and then print out the results of that step if and when it is completed, whether successfully or otherwise.

As I said, script give you enormous flexibility and control, but they don't negate the need to perform due diligence.