Baki Onur Okutucu  Thu, Nov 15 2018Thu, Nov 15 2018  azure, cloud computing, powershell  3
There are several ways to run commands and scripts on Azure VMs depending on the design you need to implement. You can use runbooks, Desired State Configuration (DSC) scripts, Azure DevOps pipelines, and many other third-party solutions for this. There's also a pretty simple standalone solution to execute commands on Azure VMs, which is a built-in feature in Azure Portal and is also usable through PowerShell.

We have two options here. First, we can use Azure Portal to execute predefined, custom PowerShell commands on a VM using the Virtual machine blade in Azure Portal, shown below.

Run a command from the Virtual machine blade in Azure Portal

We can execute predefined PowerShell scripts in the portal manually to take quick actions whenever needed, such as enabling an admin account or setting a custom RDP port. On the other hand, we may still want to automate all of these script executions, especially when we need to run commands on multiple VMs without having to do so one by one.

There are basically two cmdlets to manage running commands on Azure VMs. The first one lets us see the run command documentation. This clearly shows the command IDs and explains the predefined scripts. The following cmdlet shows the predefined commands available in a specific region.

This cmdlet just shows all available predefined commands in the North Europe region. Even though these commands can be pretty useful, the RunPowershellScript command is the most flexible one to use. It allows us to run any custom PowerShell script that we specify on a VM.

Now let's take a short tour around these predefined commands and then try to run our own script on a VM. The following command executes the predefined PowerShell script called EnableRemotePS. 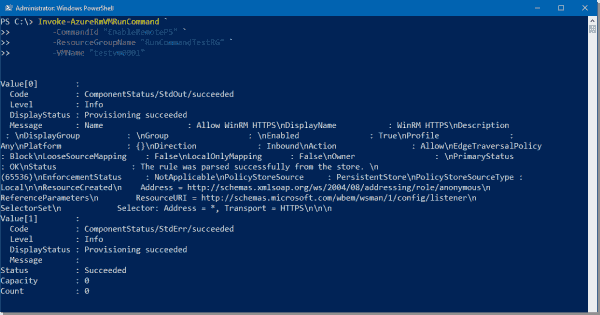 Enabling remote PowerShell on a VM

The following command gets the current RDP settings from a VM: 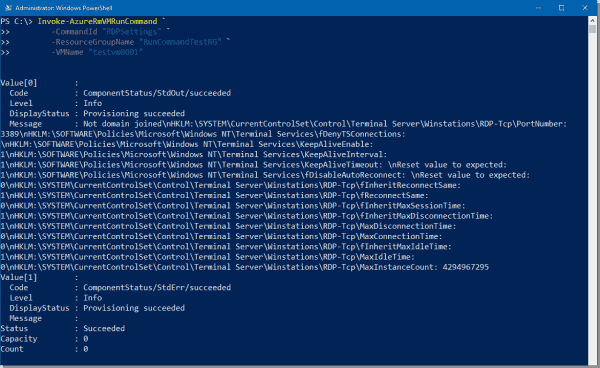 Getting RDP settings from a VM

The following command simply changes the RDP port a VM uses, which is 3389 by default. In my scenario, I will change it to 3399 instead of 3389.

Setting up a custom RDP port on a VM

If we need to enable a built-in admin account on a VM, we can use the following:

Enabling a built in admin account on a VM

This is another useful command to reset RDP certificate settings on a VM:

On my local computer, we'll run this sample PowerShell script on the VM named "testvm0001."

When we run the following command, the PowerShell console can show us the output of the command:

The output of a PowerShell script on a VM

There are some limitations and restrictions defined below.

It is sometimes extremely important to run a PowerShell command on a VM in the quickest way. This cmdlet lets us run almost any PowerShell script on a particular VM without having to use custom script extensions, DSC scripts, or automation accounts.