RSAT for Windows 10 1809 without a separate download: install as optional features

Home Blog RSAT for Windows 10 1809 without a separate download: install as optional features

Wolfgang Sommergut  Thu, Nov 8 2018Thu, Nov 8 2018  remote control, remote management, windows 10  0
Windows 10 has included Remote Server Administration Tools (RSAT) as optional features since the Insider Preview Build 17682. Therefore, you no longer need to download and install these tools manually on the admin workstation after an OS upgrade. Instead, you can add them via the Settings app or by using PowerShell.

With the introduction of Windows as a Service, the OS and RSAT versions have increasingly gone out of sync. Every feature update of Windows 10 generally requires its own version of RSAT, but sometimes there are exceptions. In addition, the tools have sometimes not been fully complete.

As a result, the tools for Windows 10 1709 came without the DNS manager, and since then, it is no longer possible to install or uninstall individual components. Adding to the confusion was the fact that Microsoft offered its own RSAT for the server released through the semiannual channel.

Users will not have to deal with these inconveniences any more, as they can add RSAT as optional features in the Settings app under Apps and Features. In contrast to the previous RSAT versions where one could only install all tools as one package, it is now possible to add individual programs. 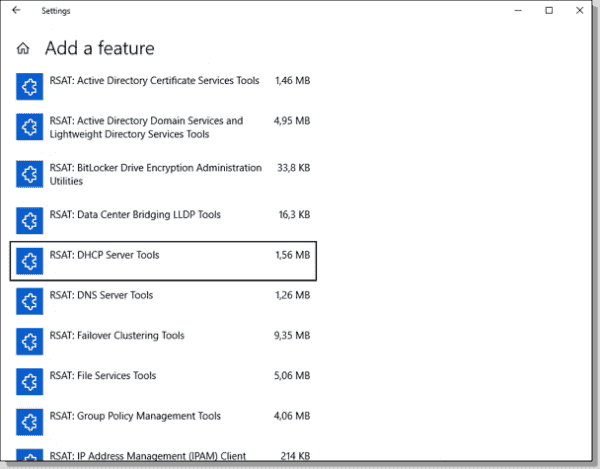 RSAT as optional features in the Settings app

This is also required even if you want to have most or all of the RSAT components. The reason is that the Settings app does not let you select multiple features for installation at the same time.

This GUI is frustrating if you've logged in to Windows as a standard user. After requiring authentication as an admin user several times, the chances are high that it will not find an optional feature.

PowerShell is more flexible and stable. Here you can use:

This displays the available RSAT tools, and you can add them using Add-WindowsCapability. For example, if you want to install all tools not yet available locally, you could do this using the following command:

Installing the DNS manager as an optional feature using PowerShell

If you only want to install specific tools, you can use additional filters as shown in the screenshot above.

You could uninstall the tools similarly with the help of Remove-WindowsCapability.

RSAT not offered in the installation media of Windows 10 ^

Windows 10 does not include the RSAT installation files, but you can download them as an optional feature over the internet. This gives Microsoft the opportunity to integrate the OS-compatible programs.

However, it remains unclear whether each of the server's different service channels (SAC and LTSC) have different RSATs. This is not apparent during the setup process.

Additionally, it remains to be seen how the RSAT installed as optional features will react during an OS upgrade, i.e., whether this will automatically update them or simply remove them as in the past.