Brandon Lee  Mon, Jan 6 2020Mon, Jan 6 2020  patch management, virtualization, vmware  0
Rolling back your ESXi version enables restoring an older ESXi boot image. This can be helpful in certain cases if you have to downgrade ESXi. Let's take a look at how to roll back and downgrade ESXi.

There are many different tools and utilities that can be used for troubleshooting a VMware ESXi host. You're probably familiar with ESXTOP, various logging tools, vRealize Log Insight, vRealize Operations Manager, or other tools you can use to narrow down issues.

However, you may get to a point where you know that your ESXi installation is now corrupt, you have taken a patch you didn't intend to take, or you have found compatibility issues in your environment with a newer ESXi version. Of course, you can always simply boot from an ESXi ISO and reload ESXi from scratch, and then restore your configuration. However, there is another way with the potential to restore a good working state with your VMware ESXi host – rolling back the ESXi version. In this post, we will take a look at how to roll back and downgrade ESXi versions to get back to a good state.

Use cases for rolling back ESXi ^

We have already touched on one potential issue in the introduction. However, there are several reasons why you might want to roll back the ESXi version that is installed on your ESXi host. These include:

These are just a few use cases you may encounter. Rolling ESXi back may make sense and save you a lot of time in reloading, troubleshooting, or performing other time-intensive tasks to get to a known good state. 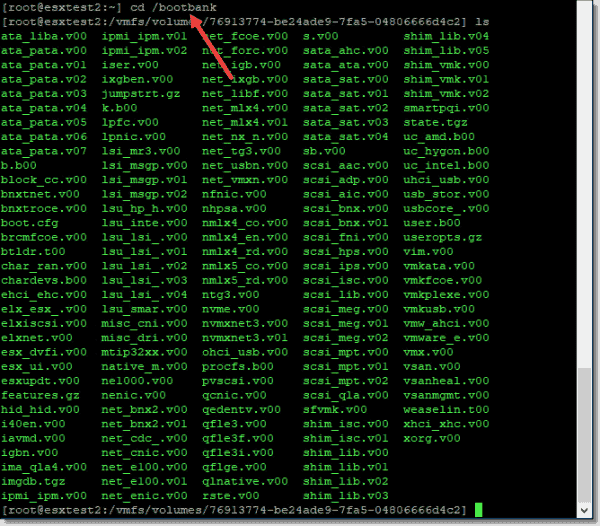 The bootbank partition contains the hypervisor image, which is decompressed at boot

ESXi is actually contained in a compressed image called s.v00. When the hypervisor boots, this special compressed package is decompressed and instantiated with the boot process. When you perform a clean install of ESXi, the /altbootbank partition is essentially blank, with only a boot.cfg file present. 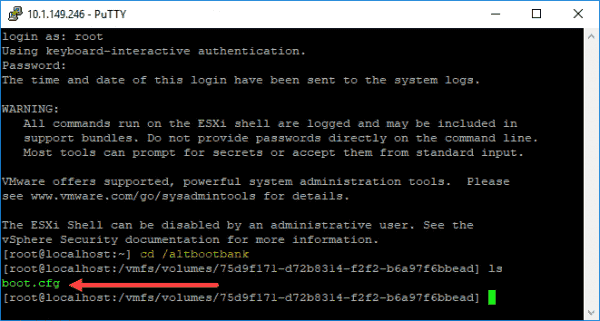 Looking at the :altbootbank partition on a clean server build 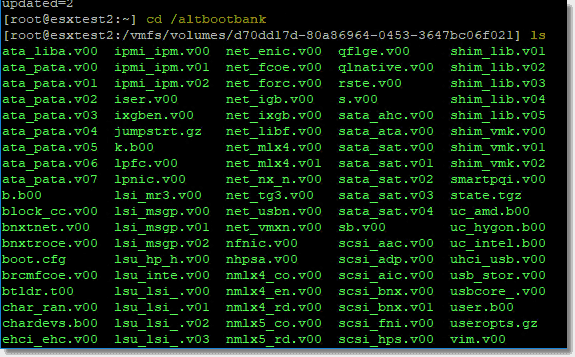 It's easy to see which versions you have available without having to reboot your ESXi host and checking the rollback options. Use the following command to see the versions contained in the boot.cfg files on both partitions, SSH'ed into your ESXi host:

Looking at the boot.cfg to see the versions contained for ESXi rollback

What are the requirements for rolling back to a previous version of ESXi? Let's take a look.

There are a few requirements and things to keep in mind when deciding to roll your vSphere ESXi installation back to a previous version of the hypervisor. These are described below.

1) You need to have access to the Direct Console User Interface (DCUI) on the ESXi host that you want to roll back.

2) Make sure to get a configuration backup of your ESXi host. This is easily done using PowerCLI:

3) Reverting an ESXi host is only valid if the host was updated using one of these methods:

4) Perform all the necessary housekeeping, including migrating any running VMs off the ESXi host

Once you have met the above requirements and you have verified you have a valid version of the ESXi hypervisor contained in the /altbootbank location, you should be good to roll back ESXi. Let's take a look at the process, which is very straightforward.

How to roll back and downgrade the ESXi version ^

The process to roll back and downgrade ESXi involves pressing the SHIFT+R key sequence when prompted while the ESXi host is booting. When you see the Loading VMware Hypervisor message, there is a short delay before the hypervisor image is decompressed. This is the moment to press the SHIFT+R key combination. 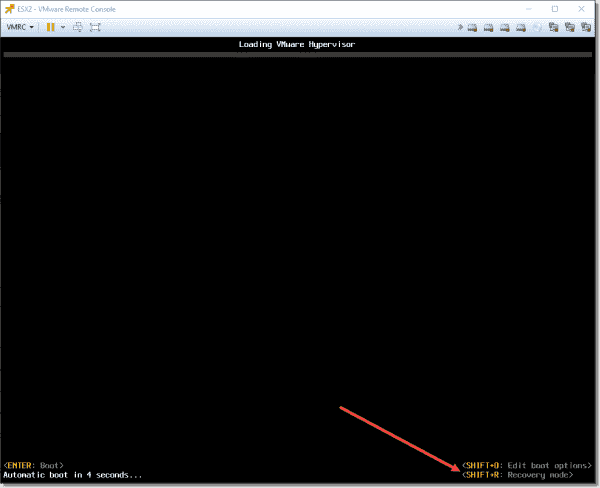 When ESXi is booting, press SHIFT+R to enter the rollback screen

This launches the VMware Hypervisor Recovery screen. It is a simple display with the current (Default) image listed as well as the alternate ESXi image. As you can see in the following screen, I have the following ESXi versions listed:

***Note*** – Rolling back your ESXi version is a permanent operation. In other words, you can't decide after the fact to return to the previous default ESXi image, which may be newer. 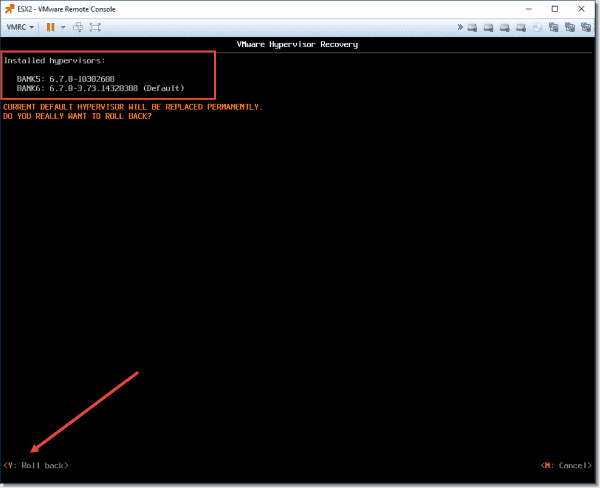 Press Y to roll back to the previous version in :altbootbank

Again, it is not possible to roll back to the previous default after initiating the rollback operation. If you reboot your ESXi host after the roll back operation, you will see the following message:

No alternate hypervisor to roll back to 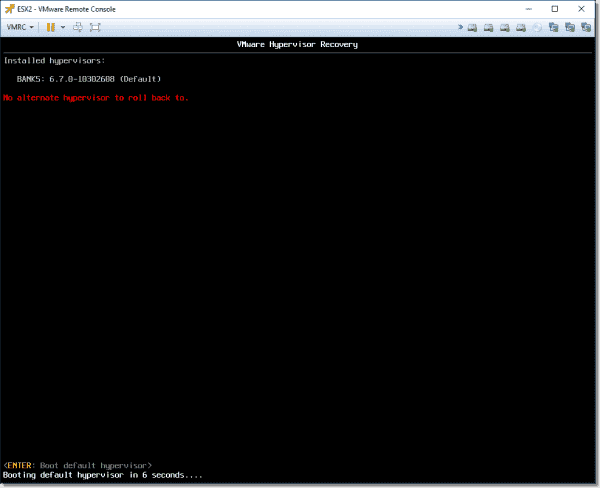 After rolling back, SHIFT+R will show no alternate versions to roll back to

Interestingly, after rolling back ESXi, if you run the “tail” command to look at your boot.cfg in both locations, you will see that the newer image has been copied to /altbootbank, while the older image, which is now the default, is running in /bootbank.

The rollback option for ESXi presents a unique troubleshooting or testing tool to go back to a previous version of the ESXi hypervisor. There are definitely issues to consider before invoking this capability. As shown, you can use the command line to see your rollback options beforehand and before rebooting the host.