This is the fourth post in my series about application virtualization. One of the products I listed in my last post was Xenocode Virtual Application Studio. Since then, I’ve tested this tool and was a bit surprised how easy it is to handle.

However, my first attempt to install the tool failed. The MSIInstaller complained that “C:\Program Files\Common Files\ODBC\Data Sources\” was missing. It was a Vista machine and so I thought it was a compatibility issue. Installation under Windows XP was done in a less than a minute. A few days later I tried it again on the same Vista PC and that time, the installation ran through without problems.

I had never worked with an application virtualization solution before, which didn’t stop me from playing with the tool without reading the documentation. To my surprise, my first virtual application was running a few minutes later on another desktop. Xenocode’s user interface is self-explanatory. If you have any experience creating installation packages for a software deployment solution, you will feel at home immediately.

First, you have to capture a snapshot of your master PC. Xenocode will scan the file system and the registry. Next, you have to launch the setup file of your application. After the installation is finished, Xenocode will determine what files and what registry entries have been added to your system. This packaging technique is sometimes called the differential method. I personally prefer those packagers that intercept the setup routine to capture system changes. The problem with the differential method is that if the source and target PC differ in any significant way, your application might not run properly, for example in a case where a certain DLL is available on the source system but not on the target PC. 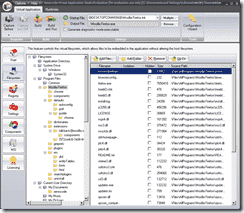 Anyway, my first virtualized application (Firefox) worked flawlessly on my target system machine. Xenotype created an exe file (the virtual application) which contained everything that Firefox required to run (the application, DLLs, registry entries). I created the virtual application on an XP machine and started it without problems on Vista and on Windows Server 2003.

I used Microsoft’s Process Monitor to see if it would make changes to the target system when I launched the virtual application. The virtual application made a couple of changes to the file system and the registry of the target PC. However, the virtualized app (Firefox) only wrote to its so-called sandbox. Firefox usually stores its settings in the AppData folder in the user profile. Xenocode redirects these write accesses to the sandbox which is also a folder in the user profile. If you create a bookmark, for example, it will be stored in this sandbox and not in the usual location.

However, it is possible to access the host system from the virtualized application. I saved an html file on the host’s desktop which was not redirected. Of course, this is a necessary feature because you have to be able to share files sometimes. But this demonstrates that application virtualization is quite different from other virtualization solutions. There is no clear separation between the virtualized environment and the host system.

I think this also shows that you can’t be 100% sure that application virtualization won’t change the host system. It depends on the cleverness of the virtualization solution in redirecting the right read and write accesses. It seems to me that Xenocode does not always succeed here. For example, I saw a couple of failed read accesses to “C:\Programs\Firefox”. This didn’t affect the Firefox application though.

Firefox is a fairly simple program. So I virtualized Office 2003 to see how Xenocode would cope with complex applications. The virtual application contained Word, Excel, Outlook and Powerpoint. As before, my source PC was running XP and the target machine, Vista. To launch a specific application one can start the virtual application with a certain parameter, for example with “office word”. This has to be configured with Virtual Application Studio though.

For example, if you want to deploy Word 2007, you might want to associate .doc and .docx with your virtual application. I think it is one of the downsides of application virtualization that one has to do this manually. Some apps use quite a few file associations, so this could be time consuming. I think this is a typical example of where the separation of applications from the operating system can cause problems.

My overall impression of Xenocode Virtual Application Studio is positive. During my tests everything worked flawlessly, except for the problem I had in the beginning with Vista. But this might have been caused by a problem with my test machine. Playing with Xenocode made me more interested in application virtualization, although I still have some reservations about the technology as such.