Robert Pearman  Thu, May 30 2019Thu, May 7 2020  backup, virtualization  1
The last time I looked at Veeam Free Edition, several key features you might expect from a backup program were missing, like incremental backups and scheduling. I accepted this though, since the product was free. This has all changed with the new Community Edition, which has full feature parity with Veeam Backup & Replication (B&R) Standard.

The only limitation now is with the number of items you want to protect, known as instances. Veeam Community Edition allows you 10 instances, to be precise. But what is an instance? A workstation backup is equal to one instance; a server is equal to three. This is perhaps a little confusing; however, if you go into the menu under Licensing, you can see your instance count.

The tool itself has the same familiar interface as the commercial Veeam products, which is good if you are used to managing Veeam in larger environments or a bonus if you are starting off with the Community Edition and then progress to the Enterprise editions.

The Veeam console is broken down into sections such as inventory, backup or tape infrastructure, and files and history. Each section has its own menu ribbon with tasks appropriate for that section. For example, under Backup Infrastructure, you can define your backup repositories (where to store the backups), and under Home, you have the main options of creating backup or restore jobs.

Now that we have feature parity with Standard, our backup infrastructure can now include external backup locations like a network-attached storage (NAS) device or a cloud service provider (CSP) partner. But for more advanced options like direct communication to Amazon Web Services (AWS) Simple Storage Service (S3) or Azure Storage, you will still need to use the Enterprise product.

I wrote before about using Azure as a host for Veeam Cloud Service Provider architecture, and now with the Community Edition supporting CSP repositories, your clients may not need to purchase Veeam licensing to use your CSP service.

Being able to use these additional storage options is a powerful tool in your defense against ransomware by making sure to store any backups in a totally separate, even offsite location.

Another option available to you in the Community Edition is replication. If you are not using clustering in your environment, having a replicated copy of a machine gives you a very quick way to recover from an issue with the primary machine. It is also brilliant for testing purposes.

When you combine these features, you can start to build a very powerful backup solution for your network or clients. If you compare it to the built-in backup component of Windows Server, you can see just how much of a difference Veeam could make. And when you remember this is now available for free, very little stands in the way of switching from Windows Server Backup to Veeam. If you also consider the loss of client backup from Windows Server Essentials 2019, I can see Veeam Community Edition as a natural successor.

Having just experienced a nightmare restoring a client's workstation from an aging Windows Server Essentials box (an EFI boot-based bare metal restore), I am pleased to say that creating the recovery media is straightforward although not accomplished using the Community Edition.

You must download and install the free Veeam Agent on a computer separately, but unlike some bootable media, it does not require any additional tools like the Windows Assessment and Deployment Kit (ADK). You can create an ISO, which is useful if you are working with virtual machines (VMs). Alternatively, as you would expect, a DVD option is available. It will automatically include the relevant drivers from the computer where you create the media, or you can manually add additional drivers to the media.

If you are thinking about backing up your client workstations, you can push out the agent (the same as the separate free agent download) from the B&R server. Alternatively, if you already have the agent deployed, the B&R server can take over control of that. When working with the agent, you create a policy on the B&R server, which it will push out to the protected computers. And although the B&R server has control of the policy, it does not actually initiate the jobs—that is down to the agent itself.

You can apply a policy to an individual computer, or, by using protection groups, you can target groups or organizational units (OUs) in Active Directory or use a CSV file to populate the group. This seems like a feature aimed at the enterprise rather than those running a small network backing up 10 computers. However, being able to target a computer's OU and letting the B&R server worry about pushing out the agent to all the relevant computers sounds like a real time-saver to me.

Of course, the same applies to any servers you want to back up, but with each server consuming three instances, there would be a lot less to install before you reached your ten-instance maximum.

It is worth noting though that I have configured one agent policy and three backup jobs, and I have consumed four instances, as two of those jobs back up server operating systems. I had expected them to consume three instances apiece.

Configuring replication of your VMs is also very straightforward. I was successfully able to replicate an Ubuntu VM from a server running the Free Hyper-V OS to my B&R server (consuming one additional instance). The only drawback is there are no controls for throttling bandwidth usage, so you may generate a large amount of traffic. 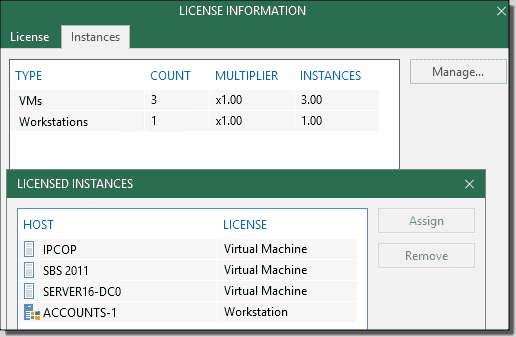 All told, I am really impressed with the number of options you have available in Veeam Backup & Replication Community Edition. Frankly, I am blown away by the fact they're giving it away for free, and I urge you to stop what you are doing, download it, and start backing up your devices!