Deploying software was supposed to be incredibly easy in the world of Windows. Every application was supposed to be neatly packaged as an MSI and always deployed cleanly with Group Policy Software Installation or System Center Configuration Manager. Configuring settings, like updates, were supposed to be super simple to set in an MST. However, little of that translated to reality.

Deploying software has always been way more difficult than it needed to be. Applications are not always MSIs and settings are difficult to find. Once you have the software ready for deployment, you still actually have to get it on the machine. Total Software Deployment (TSD) aims to be the single tool you can use to take any application through the entire management lifecycle (packaging, customization, and deployment).

What really sets TSD apart from a field of software management tools is its Software Storage/Editing component. When an application is added, TSD attempts to identify the installer type from a list of 21 common installers.

In the screenshot below, you can see two applications, Audacity and VLC Media Player, added to TSD. As soon as each application is added, TSD automatically populates the silent installation parameters and lists the additional parameters below it (example: No Icons or Install Path).

Being able to automatically detect installation switches is a huge benefit to me! Certain specific product installers have many of their installation switches built in, as well. In version 1.3, several Adobe products, major Java Runtime versions, and Microsoft Office are included. Often, you may need to test additional parameters. If these do not have the desired effect, you can quickly add and revert back to the default command line by selecting the recreate button.

The third available deployment method is the traditional snapshot (system shot) method. With this method, the machine state is captured. The application is then installed and customized. Finally, the machine state is captured again and compared against the first snapshot. The differences are packaged into an installation. This is a tried and true way of packaging stubborn software. It is important to note that all three methods are invisible to the end user.

TSD is a push-oriented deployment solution. Unlike Group Policy Software Deployment or SCCM, you can easily and immediately initiate application installations from the management console. Instead of installing a full management client, machines are enrolled in TSD through the Scanner pane. It should be noted that the program installs two different agents on remote computers: one during the scanning process, and another during deployment. When either agent completes its job, it is uninstalled, and no traces remain. 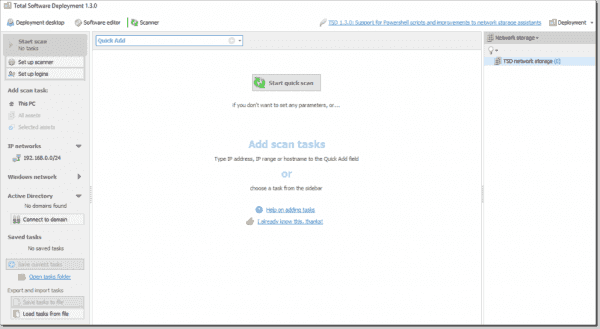 Starting a quick scan based on an IP network

Enrollment can be targeted to IP networks, Windows workgroups, or Active Directory domains. If you specify an AD domain, you can further refine your enrollment to specific AD OUs. Custom service logons can be applied to these enrollments. For example, a dedicated user can use an IP subnet, and a separate one can be used for an Active Directory domain. Once the scanning is finished, all scanned computers will be added to the Network storage and will become visible in the Network tree, which is pictured below.

From here, things get interesting. Traditional software deployment tools usually rely on set deployment windows. These windows install applications on a case by case basis. In other words, this method is not always flexible or intuitive. 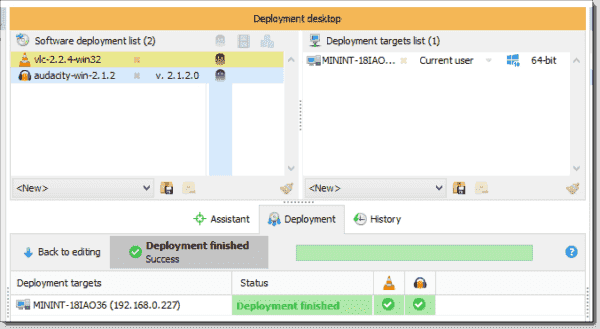 A completed deployment of two applications in TDS

Items can also be added to your deployment lists in bulk or by category/group. For example, you can create categories for basic applications or department-specific applications. Alternatively, you can use the Assistant. This feature allows you to quickly check your network computers for what programs or which versions are installed and which are not, browse the results and right away queue up software or computers for deployment according to your goal. Then just hit play and watch applications being deployed on every computer!