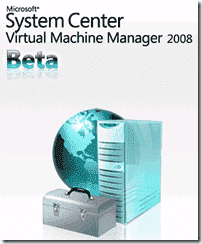 The feature complete Beta of System Center Virtual Machine Manager (VMM 2008, sometimes you read SCVMM 2008) has been available for some days now. Microsoft’s new management tool for centralized deployment and management for Virtual Server 2005, Server 2008 Hyper-V and VMware ESX can be downloaded via Microsoft Connect. Today, I had a quick look at it. This post will also give you some tips on how you can test VMM 2008 if you are already working with Virtual Machine Manager 2007.

Considering the fact that VMM 2007 was released in September 2007, VMM 2008 has quite a few interesting new features. Most prominently are its Hyper-V and VMware ESX support. I will probably blog about the new features in another post. Today, I am just sharing some experiences I had when I played a little with VMM 2008.

I was quite surprised about the message I got from the VMM 2008 setup: “Microsoft System Center Virtual Machine Manager 2008 is not supported on this operating system. For more information, see ‘Supported Operating Systems for Virtual Manager’ in Virtual Machine Setup Help.” Uh-huh my operating system (Windows Server 2003) is not supported? I like the cooperation with Novel Linux, but it isn’t that going a bit too far? No, seriously, VMM 2008 only runs on Windows Server 2008 64 bit. My first thought was, aha, they want to push their new server operating system a little. But then, why only for 64 bit? So my second thought was, MS has to release VMM 2008 as fast as possible and they don’t want to waste their time with Windows Server 2003 and 32 bit.

Installation of VMM 2008 under Windows Server 2008 is super easy. It is a typical “Next-Next-Next” installation. If you know VMM 2007, you will be able to work with the new version, immediately. The user interface looks pretty much the same. The only real new thing about the VMM 2008 Admin Console that attracted my attention was this PowerShell button "View Script". If you perform an action in the GUI, the VMM Administration console will tell you how you could have done this with PowerShell. This is certainly very useful, not only for those who prefer to manage VMM on the command prompt, but particularly for those who have to write PowerShell scripts to automate certain tasks. It is a very easy way to learn about the specific VMM commands. 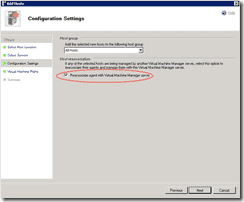 I added a Virtual Server 2005 R2 host to my VMM 2008 without any problems. My Virtual Server already had the VMM 2007 agent installed, so I told the wizard to “reassociate the agent Virtual Machine Manager”. This doesn’t replace the VMM 2007 agent with the new VMM 2008 agent. I played with the virtual machines and everything worked, properly. However, the manual says:

So I guess, for a first look it is okay to work with the old agent. If you want to manage this host again with VMM 2007, you just have to remove this host with the VMM 2007 Administrator and add it again. However, this only works if you didn’t install the new agent yet. To install the VMM 2008 agent, you have to click on Managed Computers in the Administration View and then select the managed computers on which you want to update the agent. Then you click on “Update” in the Actions pane. If you want to manage this Virtual Server host again with VMM 2007, you have to uninstall the VMM 2008 agent manually via the Server 2008 Control Panel. 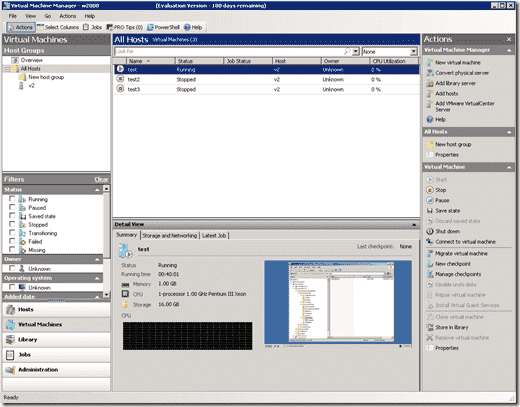 Next, I wanted to try the Hyper-V support. Since I had no other 64-bit-installation of Windows Server 2008 at hand, I stalled Hyper-V on the same machine as VMM 2008. In theory, this shouldn’t be a problem. Adding the Hyper-V host wasn’t a big deal. I only had to run this update first, to install Hyper-V RC. Only then VMM installed its agent and everything looked fine at first.

Unfortunately, VMM was complaining afterwards that it wasn’t able to connect to the Hyper-V host. The host properties signified that the VMM agent was running but Connection Status displayed “Not Responding”. I found this a bit strange since I just installed the agent and VMM and Hyper-V resided on the same physical server. I tried to create a virtual machine anyway, and to my surprise, it really worked. The only problem was that I wasn’t able to boot up the VM. The VMM’s Job log files didn’t give me any hints what went wrong. Only when I tried to launch the VM via the Hyper-V user interface was I able to figure out what went wrong: The hypervisor didn’t even run.

As it turned out, it was my fault. AMD-Virtualization was disabled in the BIOS and so the hypervisor could not start. What I find a bit disturbing is that VMM wasn’t able to give me any hints what went wrong. The Jobs log only told me that it “could not retrieve configuration data from the virtual machine host”. To be honest, I expected a bit more from a central management tool. Okay, this is just beta software. But, I doubt, somehow that the final will be better here.

Nevertheless, I like the user interface and the price of the tool. We purchased Virtual Machine Manager a while back even though I had a couple of problems with VMM 2007 in a test environment. I think together with Hyper-V, Virtual Machine Manager 2008 will be a very competitive virtualization solution. I suppose, I will blog about VMM 2008 again soon.