Two weeks ago I reviewed Symantec’s application virtualization solution Altiris Software Virtualization Solution (SVS). In that review I described how virtualized apps can be created, I explained the layer concept, and I outlined how layers can be activated locally or remotely via the command line. Symantec offers a more professional way to deploy such virtualized apps: the Altiris Streaming System. Streaming means that only those parts of an application that are actually required to run the functions accessed by the user are transmitted to the client. 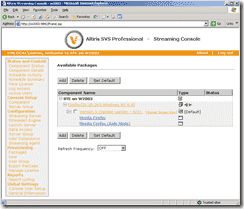 Symantec purchased AppStream some months ago and renamed their streaming solution. It is a bit strange that the new name contains “Altiris,” because this is another company recently acquired by Symantec. It seems like Symantec wants to keep the well-known Altiris brand alive. Like AppStream, Altiris Streaming System 5.2.2 allows you to stream not only virtualized Altiris applications (SVS apps), but also “conventional applications.” The corresponding packages have to be created with the Streaming Composer (a tool that comes with the Streaming System). There are three ways to package conventional apps, i.e. programs that are not virtualized. You can import an MSI file, track the application’s installation procedure, or create snapshots before and after the installation of the application. I won’t discuss streaming of conventional apps in this article because I want to focus on application virtualization in this series. 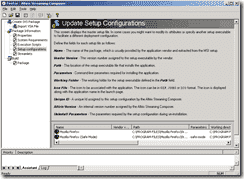 Creating a streaming package of an SVS app is fairly simple. All you have to do is to import the corresponding VSA file in the Streaming Composer, which you already created with Altiris Software Virtualization Solution. I described the virtualization process in my post about Altiris SVS, so I won’t describe it again today. It is interesting to note that a streaming package is just an ordinary ZIP file. Thus you can examine its contents under Windows by just double clicking on it. Of course it contains not only the application’s files but also additional information from the packager.

This ZIP package has to be imported in the Altiris SVS Professional Streaming Console, a web-based application for configuring the Streaming System. In the next step, you have to associate this package with single users or user groups. You can create users manually or access the user database of an LDAP source. For example, you can work with OpenLDAP, Novell eDirectory, and Active Directory. I used the latter option for my test. 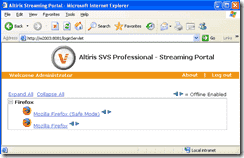 End users can access the applications that have been assigned to them with a web browser by navigating to the Altiris Streaming Portal. This works fine with Firefox and Internet Explorer. The only difference is that Firefox users have to first authenticate manually. IE users who are logged on to an Active Directory domain are authenticated automatically at the Portal. If you click on an application for the first time, the Altiris Streaming agent will be automatically installed on the client PC. Unfortunately, the computer has to be rebooted afterwards.

I suppose that in the case of conventional applications everything is ready for streaming programs after the Streaming agent has been installed. However, virtualized apps also need the SVS agent. I couldn’t find a way to deploy this agent via the Streaming Console. It seems that one has to install it manually or with a software deployment solution. At this point, it becomes obvious that Altiris SVS and the Streaming System were originally tools from two different vendors. I assume that future versions will correct this downside.

Once the Streaming and the SVS agent are installed, virtualized applications can be launched via the Portal or directly through icons on the desktop. It is also possible to pre-populate icons to desktops so end users don’t always have to check the Portal for new apps. The Streaming agent comes with a user interface that allows you to view the cache of streamed applications. It displays the amount of bytes that have been already transmitted and allows you to remove applications from the streaming cache. With Firefox, 55% - 60% had to be cached before the program was ready to be launched. I didn’t find a way to empty the cache from the Streaming System console though.

You can configure applications to download completely to the client’s cache when it is started for the first time. Only then it is possible to run the program offline. Note that offline mode doesn’t entail that you can copy a virtualized application onto a memory stick and run it on another computer like with other application virtualization solutions; Altiris SVS doesn’t have this feature. 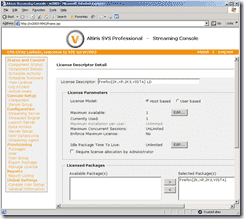 However, the Altiris Streaming System has many other interesting functions. What I like most are its license management capabilities. They enable you to assign licenses to applications, users, or computers. You can enforce license compliance, and you can set expiry dates or trial periods. The Altiris Streaming System also supports concurrent licensing which allows you to limit the number of users who can work with an application simultaneously. The reporting features are also quite sophisticated. It is possible to extract any information you can imagine about application usage. You can generate reports about licensing, applications, users, and user groups.

Small and mid-sized organizations won’t find it difficult to deploy the Altiris Streaming System. However, is also has features to offer for large enterprises. It is possible to run the different server components such as the Streaming Server (streams the apps to the clients), the Launch Server (generates the HTML pages for the portal), and the Streamlet Engine (central data store which can be MySQL, SQL Server, or PostgreSQL) on different nodes. Servers can be grouped together and organized in a tree configuration. The best thing is that you can manage everything from a single console.

As mentioned above, the Streaming System is also able to deploy MSI packages, which makes it a complete software delivery solution. The streaming of virtualized applications is just an additional feature. Unfortunately, its management capabilities with regard to Altiris SVS are quite limited. For example, you can’t deactivate SVS layers centrally with its console. For this you have to use the command line tool that comes with Altiris SVS. If you are a scripting geek, you will like this method. If you are a busy admin, then probably not. However, in most scenarios, Streaming System’s features will be sufficient to deploy virtualized applications.

Another problem I see is that there are quite a few steps to perform, using different tools, until the virtualized application is ready for streaming. Application virtualization is most interesting for organizations that have to deploy numerous different programs. Thus, these many different steps might add up over time. However, its only real weak point is that it is not possible to deploy the SVS Agent. Symantec definitely should add this feature to the next version. Overall, my impression of Symantec’s streaming solution is positive. This means something because I am not usually a big fan of web-based administration consoles.