Paul Schnackenburg  Thu, Mar 31 2016Mon, Mar 28 2016  backup, cdp, cloud computing, dpm  35
System Center (SC) 2016, now in Technical Preview 4 (TP4) at the time of writing, is coming along nicely. We looked at Configuration Manager in Joseph’s excellent article and at Virtual Machine Manager 2016 TP3. Over the next few weeks, we’ll be looking at the other parts of SC, such as Service Manager, Orchestrator, and Operations Manager. Today we will review Data Protection Manager (DPM) 2016.

If you’re interested in seeing how DPM has evolved, we’ve got you covered: 2012 R2, DPM 2012, and even older versions. With the regular Update Rollup cadence for System Center 2012 / 2012 R2, new features are added every few months, so the 2016 wave of System Center doesn’t come with a huge amount of new innovation. This is, in some ways, a blessing for a resource strapped sysadmin—the delta is smaller, so upgrades should flow easier. To complete the “DPM picture,” you should also look at Microsoft Azure Backup Server (MABS). It’s basically a “free” DPM 2012 R2, without tape support, that lets you backup workloads to local disk and then to Azure.

Coming in DPM 2016 is support for mixed mode Hyper-V clusters (Windows Server 2012 R2 and 2016 nodes in the same cluster) and support for protecting workloads on Storage Spaces Direct (S2D). Also on the table are Resilient Change Tracking (RCT) and support for shielded virtual machines (VMs) that are protected by a virtual TPM chip and Bitlocker. 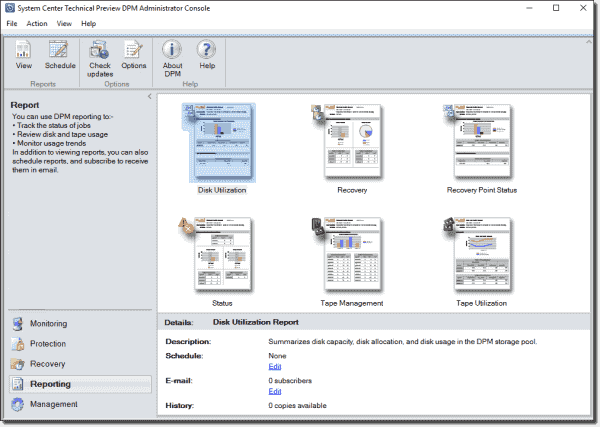 Reports in the DPM Console

The upgrade story for Hyper-V keeps improving for every version. Going between 2012 R2 and 2016, you’ll be able to evict one existing node (or add a new one), clean install 2016, and then join it back into the cluster. Rinse and repeat until your whole cluster is upgraded, at which point you can “flip the switch” on the cluster functional level.

DPM 2016 will be able to backup VMs across both versions and track which host they’re on. However, note that Nano Server isn’t supported (at least not in TP4). That’s going to be a show stopper for Microsoft’s recommendation that Nano Server as the preferred virtualization host platform. I hope Microsoft will fix this in a later TP.

S2D is an evolution of Storage Spaces in Windows Server 2012 / 2012 R2. It can be used in a disaggregated fashion in which local storage on several hosts (four is the minimum, at the moment) is presented to a Hyper-V cluster as highly-available storage. Alternatively, it can be hyper-converged so that local storage in each Hyper-V host is used to store VMs.

DPM 2016 supports backing up VMs in this configuration, but again, not on Nano Server. I tested this with a few VMs on my four-node S2D (physical) cluster; it worked as expected. 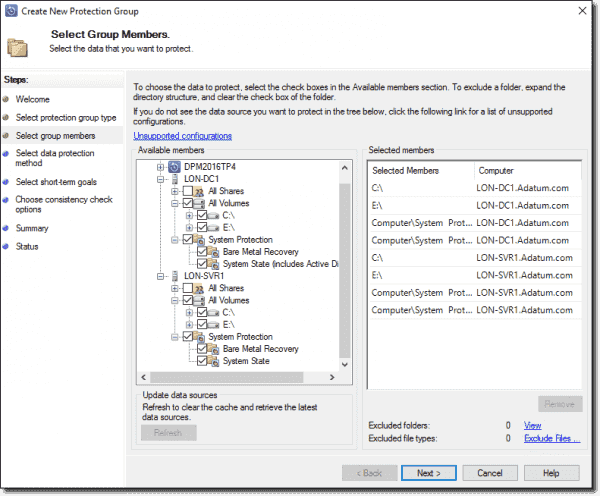 One of the big changes coming in Windows Server 2016 Hyper-V is the shift away from relying on backup vendors writing their own file system filter driver to track changes in virtual disks. This functionality is moving into the core Hyper-V platform. Hopefully, third party backup vendors should be able to support Windows Server 2016 Hyper-V faster, since they don’t have to develop their own filter driver. DPM 2016 will, of course, support this functionality, which means that changed blocks are tracked using an on-disk map as well as an in-memory map. More details can be found in Taylor Brown’s excellent presentation at TechEd Europe 2014.

With shielded VMs and virtual TPM chips coming to Windows Server 2016 and Microsoft drawing a strong security boundary between the VM / workload administrators and the fabric administrators, of course, backup becomes a challenge. Sure, you can run an agent inside the VM and back it up on a per-VM basis, but most enterprises want a single backup solution that protects all the VMs from a host perspective. DPM 2016 will support the backup of virtual TPM/Bitlocker-protected VMs.

Looking at user voice for DPM (and Azure backup), the top requests are being able to do item-level recovery from Exchange (third-party backup solutions offer this, but not through supported methods), 5-minute (instead of 15) intervals for SQL backup, support for protecting SQL Server 2014 databases stored on CSV volumes, support for protecting NAS and CIFS volumes, and automatically adding new VMs on a Hyper-V host. Even existing users seem mostly interested in incremental feature improvements, rather than huge new features.

Interestingly, a planned feature is managing on-premises DPM servers that do “disk to disk to Azure” from the Azure backup interface.

If you were looking for compelling features to throw out your current backup solution and invest in System Center, I think the forthcoming 2016 version will disappoint. It’s very much a gradual evolution of the current product, which is a solid backup solution for Microsoft workloads. To be truly competitive, it needs to add VMware backup support, as well as other enterprise workloads. I suspect this will happen in the future, but perhaps in Azure services instead of DPM.