Timothy Warner  Wed, Sep 9 2015Wed, May 2 2018  backup, hyper‑v, virtualization, vmware  0
You might already be familiar with Altaro Hyper-V Backup; until now, this was Altaro’s flagship product. Altaro says that its number one customer feature suggestion was VMware support, and with VM Backup we finally have it! 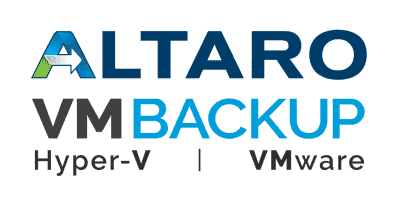 I live in Nashville, Tennessee (also known as “Music City USA”), and we as a city are decidedly a Microsoft shop. That said, so many businesses I’ve worked with here have both VMware and Hyper-V in their virtualization infrastructure.

In many cases, a business starts its server virtualization with VMware because it was “told to do so” by some value-added reseller. Over time, though, these IT admins deploy virtual machines (VMs) in Hyper-V not only because doing so is cheaper but because Hyper-V seamlessly integrates into the Windows Server stack.

So how can you most efficiently take backups in a dual-hypervisor environment? In this article, I’d like to introduce you to Altaro’s VM Backup.

Let’s imagine we’re called in to design a VM backup and restore strategy for a fictional company called YYZ Healthcare. The following image shows you its basic logical network topology:

YYZ has all its services virtualized across Windows Server 2012 R2 Datacenter Edition Hyper-V hosts and a single VMware ESXi 6.0 host in its Nashville HQ. The Atlanta branch office serves as an offsite backup repository.

We’ll assume here that, although the ESXi host serves only two virtual machines, the CIO is unwilling to part with the box. YYZ paid for the Windows Server Datacenter Edition licenses because these licenses cover unlimited Hyper-V VMs.

Finally, note that YYZ is unwilling and unable to deploy System Center and currently has no plans to extend its on-premises infrastructure to the cloud for security and privacy reasons. As a consultant, how can we help YYZ Healthcare protect its VMs not only for least cost but for least complexity?

Well, you know that I’m going to recommend Altaro VM Backup; that should be pretty clear. But what does the Altaro deployment look like? It’s surprisingly simple, as you’ll soon see.

To accomplish this, simply download the VM Backup executable and run through the simple “Next, Next, Finish” setup on both computers. I love the lightweight nature of this tool—and there’s no SQL Server requirement! 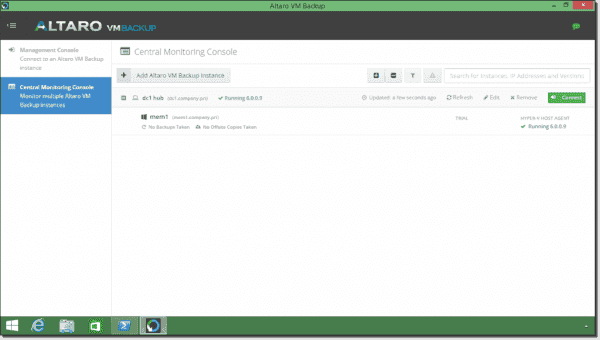 In stark contrast to the System Center tools, setting up our VM backup/recovery environment in Altaro VM Backup is straightforward. We have three steps:

As you saw, YYZ Healthcare has only a single ESXi host. Nevertheless, Altaro VM Backup integrates with VMware vCenter Server. This means that we can back up and restore an entire fleet of ESXi hosts and associated VMs with just a couple of mouse clicks. Powerful!

After I connected to my new VM Backup instance (dc1), I used the Host Setup wizard to add my mem2.company.pri Hyper-V host. As you can see in the following screenshot, we can seamlessly connect to either Hyper-V or ESXi/vCenter hosts. 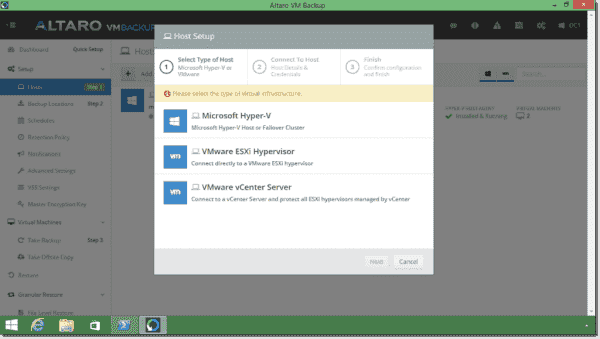 We can include both Hyper-V and VMware hosts in our VM backup infrastructure.

I want to stress that I didn’t have to manually deploy the Altaro agent to mem2; this was accomplished transparently when I added the server to my Central Monitoring Console. We can verify agent installation by checking the Programs and Features Control Panel: 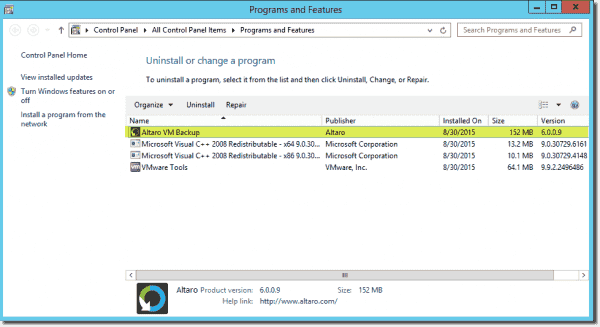 Altaro has had a long-standing licensing feature in which the first two VMs per host are free. Thus, we can use Altaro VM Backup to manage our single ESXi host without incurring any additional licensing cost. Also of note here is that we can include both “standalone” and clustered VMs in our backup deployment because VM Backup understands Windows Failover Clustering as well as cluster shared volumes (CSVs).

Next, we need to define our backup target or targets. Altaro VM Backup gives us three choices for VM backup location:

In my example, I specified the network path \\mem2\vmbackups as my network VM backup location. As you can see in the following screenshot, all we have to do next is drag and drop our managed VMs to the appropriate backup target. 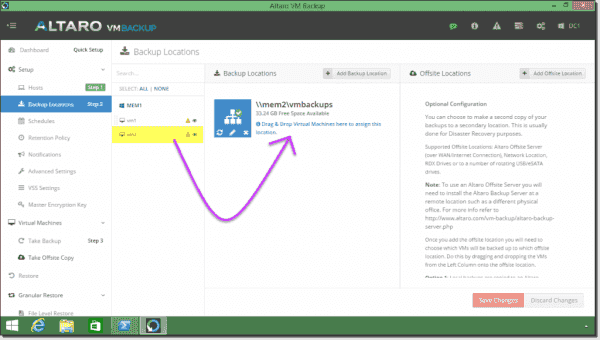 We use drag and drop to assign virtual machines to backup targets and backup schedules.

As you see in the following screenshot, the Altaro VM Backup Dashboard keeps you fully apprised as to backup status. As expected, Altaro VM Backup uses VSS to back up running VMs. You can also establish backup retention settings in accordance with your service-level agreements (SLAs). 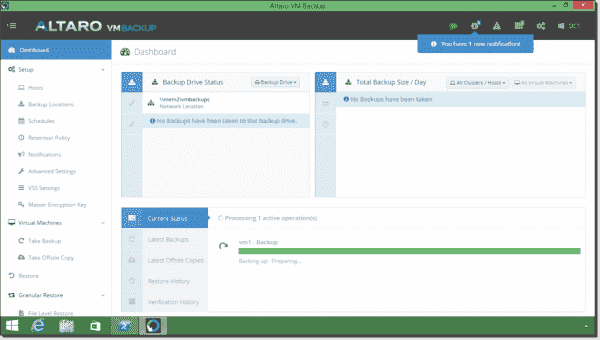 Altaro VM Backup leaves nothing to the imagination.

Third, we connected to the primary VM Backup server and added our Hyper-V and/or VMware hypervisors. In this step, we relied on the Altaro product to deploy the agent software automatically.

Fourth, we created one or more backup targets and assigned VMs to those targets. Fifth and finally, we took a manual backup.

We visit the Schedules node in the VM Backup management console to define backup schedules for our VMs. One thing I like about the Altaro backup scheduler is the Preview area. This serves as a “sanity check” to make sure that our schedule will back up the VMs, well, according to our schedule. 🙂 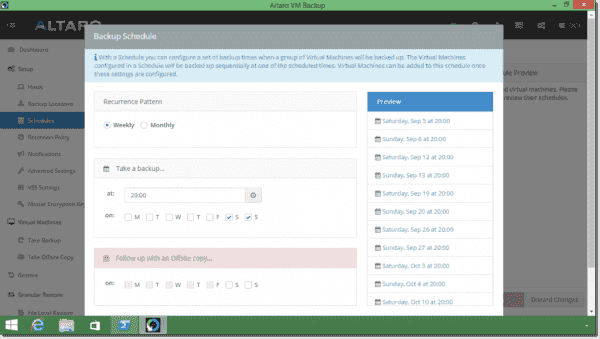 If you’ve been following me so far, then you already know how we assign VMs to particular backup schedules. That’s correct—you use drag and drop. It couldn’t be simpler.

With regard to offsite copies, you can always simply point to a remote network path. You’ll get better fidelity and network efficiency by nominating an Altaro Offsite Server in your remote site, though.

In the management console, you add the Altaro Offsite Server as a backup location. First, however, you need to install the full Altaro VM Backup software on your nominated offsite server. Configuring the offsite server is easy. All you do is start the server, create one or more application service accounts, and specify a default backup location. 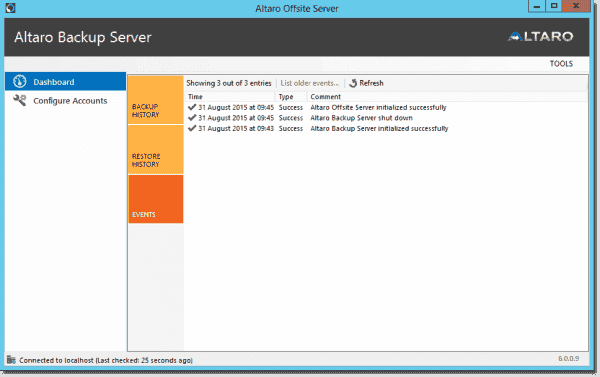 Now, we can associate VMs with the offsite location and add offsite copies to our schedules and backups. 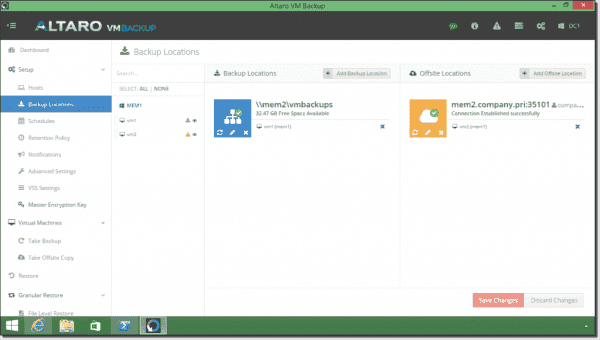 We now have backup redundancy.

Of course, backup verification and restore are the other side of the VM backup equation. Altaro has us covered in both regards. We go to the Sandbox & Verification section to run trial restores. I welcome this feature because, like most Windows systems administrators, I’ve been unpleasantly surprised by failed restores due to my lack of proactive integrity testing. 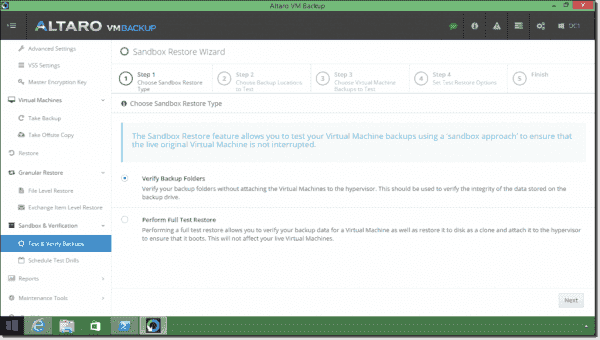 Make sure you're testing your backups periodically to make sure they’re valid.

With regard to VM restore, we can restore entire virtual machines or, believe it or not, individual assets from within a VM backup. For example, you can retrieve an important email message for your CEO that she accidentally deleted this morning by using Altaro’s Exchange Item Level Restore. 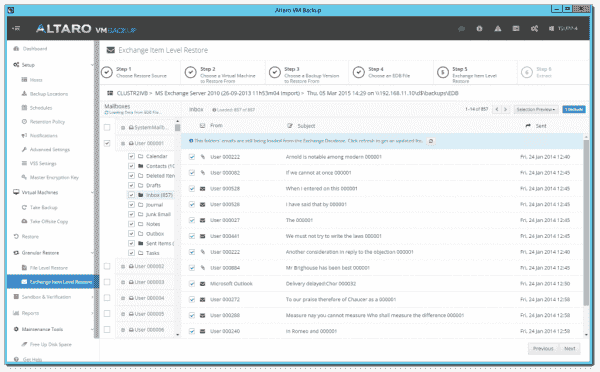 You can retrieve individual emails with the Exchange Item Level Restore feature.

Licensing, documentation, and next steps ^

As I said earlier, Altaro generously licenses up to two VMs per hypervisor for free. Check the Altaro website for additional licensing cost details.

In the meantime, I’d encourage you to read the company’s Quick Start Guide and visit its Support page to examine full product manuals. Finally, my friend (and PowerShell MVP) Jeff Hicks wrote a cool cookbook on how to manage Hyper-V by using Windows PowerShell.

If there’s a downside to Altaro VM Backup, it’s that many Windows systems administrators prefer a single, “one size fits all” backup solution that will back up all their servers and services. It’s true that Altaro’s product is limited in scope to your VMs.

That said, however, I’ve never seen a more user-friendly backup utility in my nearly 20 years in the IT industry. Thanks for reading and have a great day.