When I heard about the money that Microsoft put on the table in the Acompli acquisition, I thought, wow, there must finally be a good email app for Android. Before I forget, the Acompli app is also available for iOS, but I only tested the Android version for this review.

When I saw that the app is free, I was surprised. A while back, I tested quite a few email apps for Android. Only those with a price tag were really worth mentioning. Thus, I was curious to see if I finally found a PIM tool that can replace the one that came with my Samsung phone. Just to tell you from the start: the answer is no.

My test started with a disappointment. I wasn’t able to add my Office 365 account even though Acompli claims Microsoft’s Exchange Online is supported. For the sake of completeness, Acompli supports Exchange, Outlook.com, Google, iCloud, and Yahoo. You can also connect OneDrive, Dropbox, and Google Drive. More about this later.

First, let me continue the story about Office 365. Manually telling the app the address of the Exchange server (outlook.office365.com), which works with many apps that have problems with Office 365, didn’t help. I used Microsoft’s Remote Connectivity Analyzer to verify that Outlook Autodiscover is configured correctly. It was. I then tried a second Office 365 account and, behold, Acompli added the account without any complaints.

To cut a long story short, in the end, I was also able to add the first account with a simple trick. I changed the reply email address of this account in Office 365. I came to realize that Acompli somehow confuses Office 365 with Microsoft accounts because the app sometimes told me that I should use the correct service for the account. (The error messages always differed.) I must admit, it sometimes also confuses me that two independent accounts from the same provider can have the same login ID. Microsoft definitely needs to clean up its account mess. It is not the first time that this caused me a headache.

Anyway, after I was finally able to try the app, I was pleased by its design. It looks very much like Microsoft Office Mobile. It seems that Microsoft will have little work with integrating Acompli into its Office suite for Android. I guess that was a factor in the decision to buy Acompli and not one of the myriad other email apps.

Admittedly, the Acompli app has a few interesting features that other apps lack. As mentioned above, you can add your cloud drive account. The point of this feature is not that you can then access your cloud drive files with a second app. One of the most banal things with any PC email application is that you can easily attach files. 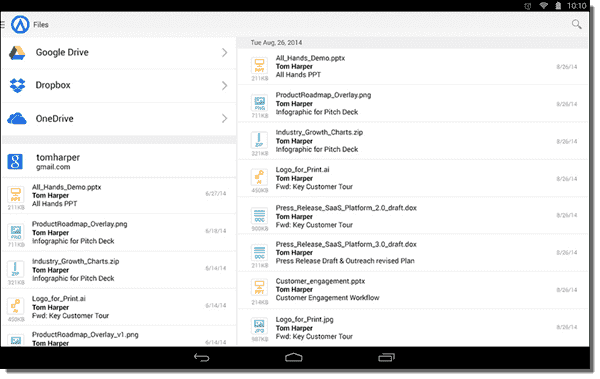 Not so with mobile email apps. The files you want to attach are usually not on your phone or tablet, and this is where the cloud drives come in. Unfortunately, Acompli does not really attach the files; instead, it just adds a link to the email that points to the file on the cloud drive. This is not how I would like to send attachments, but I guess some folks will find this cool.

Speaking of files, Acompli has another useful feature related to attachments. You can easily get a list of all attachments in your inbox. I wouldn’t even know how to do this in Outlook for Windows. The Acompli app also offers a filter that allows you to display only emails with attachments. The other available filters are useful as well. You can restrict the email list to show only unread and flagged messages.

This brings me to the main reason I won’t use the Accompli app. If you flag an email in Outlook, the message automatically appears in today’s tasks. You can also set a later date easily. For me, this is one of the most important Outlook features. It allows me to quickly skim through my emails and assign dates when I want to reply or when I have to do the corresponding task. I also use this feature for sent emails to make sure I can send a reminder if the person doesn’t reply in time.

Those emails then appear with other Outlook tasks,  (calendar entries only show in the To-Do bar) and even flagged contacts in the Outlook To-do-list folder on the configured date. So, when I click today’s tasks, I get a good overview of everything that needs to be done on that day because Outlook integrates all tagged objects from different sources (emails, tasks,  contacts). When I discovered this Outlook feature a few years ago, it literally boosted my productivity. I estimate that it saves me at least one hour per day. Even more important is that this feature ensures that essential things get done first.

Hence, I find it amazing that almost no Android app handles flagging properly. Actually, I only found one: Touchdown. Unfortunately, the app is no longer updated. However, I still use it just for that reason, together with the Android PIM apps. The Android email app also supports flagging, but for some reason it sets the date to “next week.” I wonder if this says something about the developer’s work attitude. The Acompli app sets no date at all, which, in my view, makes flagging useless for information workers. I know that this is how it is done in Gmail. But Gmail is a super-spartan email app that nobody who needs to be productive should use.

The Acompli app has another feature that appears to compensate this shortcoming. It allows you to schedule emails. If you swipe an email entry from left to right, you can set a date and time. The email then moves from the inbox to the scheduled folder and will reappear in your inbox at the scheduled time. In my opinion, this feature is useless too. 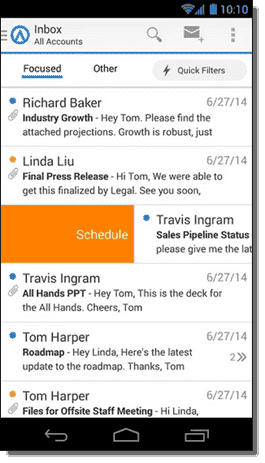 First of all, these settings are not synced with Exchange. Most people use the email app on their phone just to quickly check emails when they are on the way and then continue working with them in Outlook on their PC once they are back in the office. Second, this proprietary schedule feature does not integrate with my other schedules and tasks. I really don’t want to monitor my schedules from a second location. I can hardly manage one.

It appears to be Acompli’s mission to help users with email overflow. But the third attempt to deal with this problem fails as well. The app offers a so-called Focused folder that is only supposed to display all your important emails. Smartphones are smart, but not that smart. How can an app know which emails are important and which are not? Acompli claims that the app learns this from your behavior. 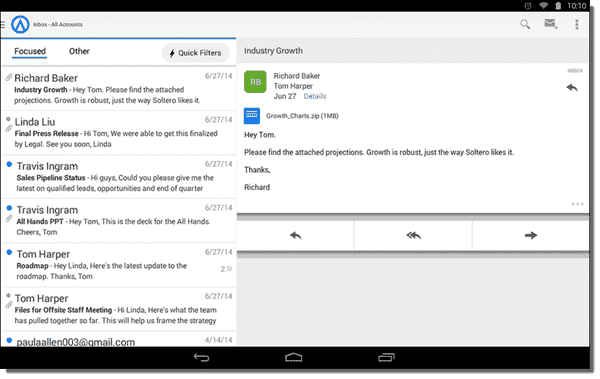 For instance, if you move an email from the Other folder to Focused, the app will know next time that this sender is important to you. But what if you receive an important email from someone who never contacted you before? Since you can never be sure, you will find yourself checking your Other folder anyway. Even worse is that no folder exists that displays all emails of a certain account. So, you have to switch back and forth between two inboxes. I think this a good method to waste a lot of time. The best thing about this feature is that you can turn it off.

Okay, I admit this all sounds a bit negative. But the app has its good sides, too. I like how the app handles threads—something that many Android email apps have a problem with. Right behind the subject, you see the number of emails in the thread. If you tap, the thread opens. A second tap on an email in the thread snaps opens the message text.

I also like the autocomplete function of the To field. Yes, Acompli also syncs your contacts with Exchange, but this part of the app is no match for Android’s native contact app or Contacts+. This also applies to Acompli’s Calendar feature. Compared to S Planner, it is only a toy, and the Acompli app also can’t sync your tasks. 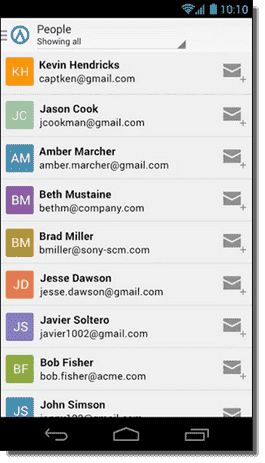 The app lacks a few other essential features that any mobile email app should have. Surprisingly, it doesn’t support zooming. During my test, I received an HTML email that was almost impossible to read. Yeah, I am getting older. But that’s a good excuse for me and not for a relatively new mobile app.

Another feature every professional mobile email app needs is the ability to schedule notification times. I don’t want an email app to wake me up in the middle of the night for a Microsoft press release; however, when I receive an email from a monitoring tool that 4sysops is down, I am thankful for a nasty ringtone.

So is this app worth $200 million? I doubt it. Perhaps Microsoft wasn’t so much interested in the app but in its Android and iOS developers. Nevertheless, it is a good sign that Nadella continues to deemphasize Windows. We desperately need a powerful Office suite for Android. When it comes to productivity, it is still a very long way to go until mobile devices can compete with the PC.