Results of the Windows 8 poll – Is better performance and less bloat possible?

Disclaimer: The opinions expressed here are only my own. At the time of this writing, Microsoft made no official announcement about the new features of Windows 8.

It has been a while since the Windows 8 poll was launched on 4sysops and 16 other blogs. About 4000 people took part in this poll. For me, the results are somewhat surprising.

Readers could assign stars to 20 possible new Windows 8 features. The maximum, five stars, signified that the feature is most wanted. Visitors could only vote for selected features if some of the features were unclear to them or if they had no opinion about a feature.

The votes from all 17 blogs were collected at a central server and are presented below. 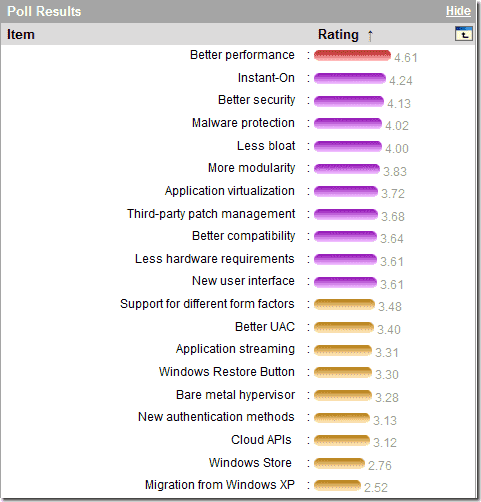 The clear winner, with an amazing 4.61 points out of 5, is "better performance." This is the most surprising result for me. I gave this "feature" only one star, which means that I don't want Microsoft to waste too much time on improving the performance of Windows.

The reason is simple. The performance of a computer is mostly a matter of the hardware, provided that the software doesn't contain severe design errors. Hardware has been improving by a much higher rate than software in the last decade. Thus it is quite likely that, when Windows 8 is released, common consumer PCs will be able to run several virtual Windows 8 machines in parallel without even sweating.

So why did the majority of the 4000 voters want a better-performing Windows? The only explanation I have is that they overestimate the role that operating systems, or software in general, plays when it comes to performance. This might be because many voters experienced better performance with Windows XP than with Vista. However, the reason for this was mostly because people were running Vista on machines with not enough RAM. Of course, a more developed operating system needs more memory, just like a further developed brain needs more neurons. There is not much the Windows developers can do here if they really want to improve the operating system.

The fact that instant-on came in second, with 4.24 points, is a bit related to the performance issue. Obviously, people are no longer willing to wait for computers to finish certain tasks. However, I gave this feature five stars for two reasons. First of all, I believe that, contrary to improving performance in general, the boot-up time can be improved significantly by software means. Second, the role computers play in our lives has changed lately. Computers penetrate our lives more and more, and the number of "devices" replaced by computers is growing in an accelerated way. We didn't have to wait for phones, TVs, video recorders, radios, toys, typewriters, writing paper, magazines, and books to boot up in former times, so we expect the same "performance" for their digital replacements.

Better security and integrated malware protection came in third place (4.13 points) and fourth place (4.02 points), respectively. These results are certainly important for the same reason. The more we integrate computers into our daily lives, the more interesting they become for the bad guys and the more effort must be invested in security. I wonder if the European bureaucrats will dare to prevent Microsoft from integrating malware protection into Windows 8. It is really absurd that most freshly installed Windows machines go online without any malware protection. I somehow believe that we will get a second ballot screen for antivirus software. However, my wish is that third-party software vendors will use Microsoft's scan engine and only provide their own antivirus signatures and heuristics.

The last feature I want to discuss today is the fifth-place result, "less bloat" (4.0 points). The term "bloat" became most popular during the Vista-bashing campaigns by the media. To be honest, I can't really imagine how a new operating system with new features could be less bloated than its predecessor. Less bloat simply means fewer capabilities. Adding new features increases complexity and requires more resources, just in the same sense as a bloated brain has higher mental capabilities (can run more complex cognitive/software tasks) than a less bloated brain. The Windows edition with a minimum of bloat was Windows 1.0. So what do people want—that we move backwards in time? Like biological evolution, technological evolution is unstoppable and leads to ever more complex systems. Windows is no exception here. Thus I am pretty sure that this wish is unlikely to be considered in Redmond.

Okay, now you can start bashing me for my unpopular views. You want less bloat and more performance in Windows 8? I hope you have some good arguments! 😉