Michael Pietroforte  Wed, Feb 16 2022Thu, Feb 17 2022  fun, windows  5
In our previous poll, I asked how many of you are planning to deploy Windows 11 to end users in 2022. The result more or less meets my expectations. Only a few organizations have concrete plans to upgrade to Windows 11.

700 IT pros took part in the Windows 11 poll. This is usually statistically significant. Two-thirds of the participants won't deploy the latest Windows incarnation this year. Fifteen percent have no concrete plans, and only 18 percent want to deploy Windows 11. 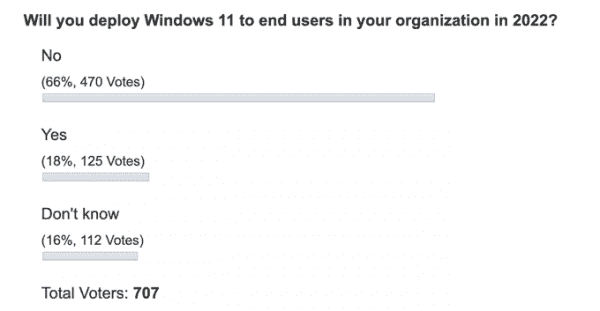 If we now consider that planning and executing are usually two very different things in IT, we can conclude that less than 10 percent will actually upgrade to Windows 11 any time soon.

My guess is that many of those who will eventually bite the bullet are still running Windows 7, or perhaps an even older Windows version. Support for Windows 7 ended on January 14, 2020. Microsoft was forced to extend support because of the popularity of this Windows release. It is quite remarkable that Windows 8 support ended four years earlier because the first "tablet edition" of Windows was a complete failure. The market share of Windows 7 is still above 10 percent, and I guess many of these organizations are feeling the pressure to upgrade an OS that hasn't received any security patches for more than two years.

Upgrading from Windows 10 to Windows 11 doesn't really make much sense, considering that Microsoft continuously forces updates on its clients. Obviously, the result is that the difference between Windows 10 and Windows 11 is tiny. The times when a Windows upgrade made a huge difference are long gone.

Remember the massive stability improvements that Windows NT brought, and then the huge innovation jump from Windows NT to Windows 2000 when Active Directory was introduced? Even the hated Windows Vista came with big improvements with regard to security. Windows 7 was only so popular because it could build on Vista, and most third-party software and hardware manufacturers aligned themselves with the new security requirements. Windows 8 was the last release in which Microsoft tried to introduce innovations, and it completely failed. Just think of those really badly engineered Windows Store apps or however Microsoft's marketing calls them this week. (I call them Windows toy apps.)

However, I suppose the main reason for the reluctance to upgrade to a new Windows version is that many admins know that a downward spiral in the reliability of Windows updates began when Nadella became CEO. The key phrase here is "Windows as a service." From Microsoft's point of view, this move was brilliant in two ways.

Microsoft's shareholders were shocked by the fact that nobody wanted to buy Windows 8, the worst Windows version ever, built under Ballmer's watch. So Nadella had to react. Instead of relying on Microsoft engineers' ideas for innovation and depending on clients' interest in upgrading, Microsoft simply forced upgrades on Windows, which is exactly what "Windows as a service" means. The really cool thing about this move was that Nadella no longer had to present Windows sales numbers at shareholder meetings. Really brilliant!

What many don't know is that "Windows as a service" also meant huge cost savings for Microsoft. Once you can force upgrades on users, reliability is no longer an issue. One of Nadella's first major moves was to lay off a huge number of software testers. Instead of letting Microsoft employees test the software, paying clients were forced to become alpha and beta testers. Of course, such a bold move was only possible because Nadella can exploit the monopoly in the desktop OS market that Gates created. When it comes to Windows upgrades "too big to fail" gets an entirely new meaning.

Microsoft and reliability were never friends. Everyone knows the story of how it all started when Bill Gates and Paul Allen flew to Albuquerque to demo their BASIC interpreter for the Altair, and Allen was still messing with the code on the plane. It turned out that "rapid application development" worked just fine for Micro-Soft (the original spelling), and software testing is essentially a waste of time in a very fast-moving market. This attitude became part of Microsoft's DNA, and Nadella tried nothing less than to return to Microsoft's very successful roots. However, Nadella is not the visionary that Gates was, so now we have a very unreliable operating system with very little innovation. 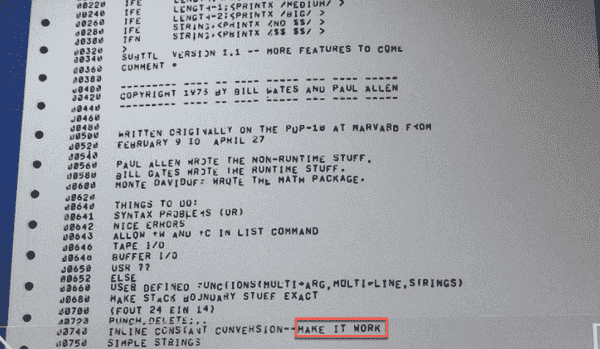 Make it work—Since the beginning, Microsoft has fought with reliability; the listing shows the original code of the Altair BASIC

This is why Windows 11 is a big risk factor for Microsoft. For the first time since Nadella took over, clients can actually decide if they want to upgrade (at least for now). I think this poll shows what IT pros think about the innovation and reliability of Windows updates. I mean, think of it—the upgrade is FREE, as in "free beer," and still only a few admins even consider turning their end users into beta testers of the final release of Windows 11.

Please share your thoughts about Windows upgrades. Is stability and reliability of Windows an issue for you? Do you think that Windows 11 brings breathtaking new features?