Wolfgang Sommergut  Thu, Mar 7 2019Mon, Nov 4 2019  active directory, group policy, security  13
Applications based on Office can be developed quickly and easily using VBA macros. However, malware programmers often misuse such macros. With the help of Group Policy Objects (GPOs), you can protect yourself against this. There are multiple settings for all applications or individual ones.
Contents

Excel and Word macros are among the most popular applications. With VBA, even experienced users can quickly create tailor-made solutions for their needs. For this reason, disabling macros completely is not an option for most companies.

Harmful macros continue to be a threat

Malignant code has countered the benefit of macros for years. Although Microsoft has developed various defense mechanisms over the years, they've never completely eliminated this threat. The recent spread of Emotet, which infects computers via macros, shows that many systems and users are still vulnerable to such attacks.

One lesson learned from this epidemic is that virus scanners alone do not provide sufficient protection. Instead, admins should take several preventive measures, such as whitelisting of applications. Effective control of Office macros is a must as well.

In general, users can use Office's Trust Center for this purpose. Here you can define rules for the execution of active content such as ActiveX controls, add-ins, and VBA code. 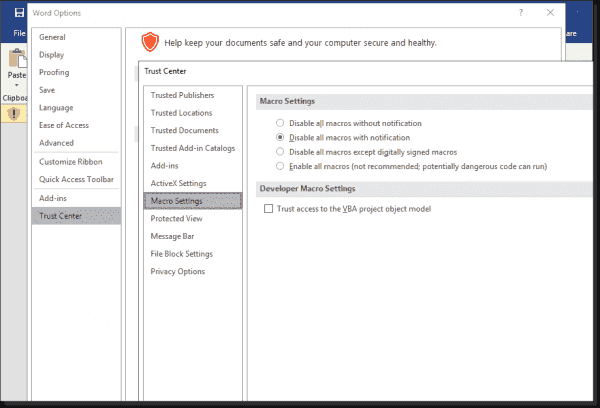 In the Trust Center, users can change the settings for macros themselves

However, given the importance of protecting against malware, admins should not leave this task to the end users. A central solution based on group policies is preferable. Since Office 2016, Microsoft has offered additional settings for managing macros.

If you haven't yet installed the administrative templates for Office, you can download them from Microsoft's website here. 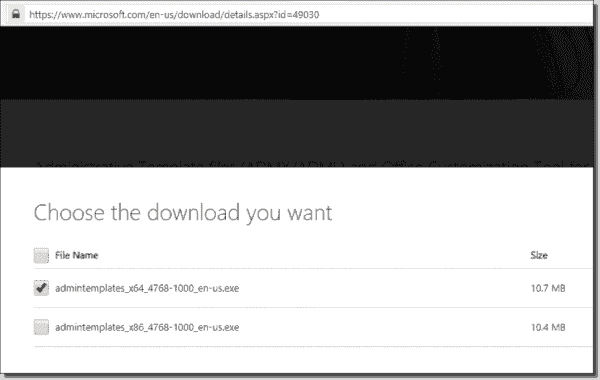 Then unzip them to %SystemRoot%\PolicyDefinitions on the admin workstation or to the central store on a domain controller. The ADMX files are identical for Office 2016 and 2019; GPOs for 2016 also work for version 2019.

A radical measure, but one that probably goes too far for most companies, is to disable VBA completely. You can configure the respective setting ("Disable VBA for Office applications") for both computers and users. It can be found under Computer or User Configuration > Policies > Administrative Templates > Microsoft Office 2016 > Security Settings. 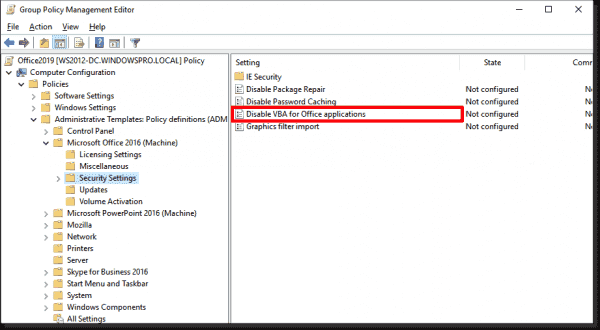 GPO setting to disable VBA on each computer

However, if you need VBA macros and want to protect against malicious code, you can specifically restrict their execution. Here it makes sense to allow only digitally signed macros. But you have to do this per application. The respective option is VBA Macro Notification Settings. For Word, you can find it under User configuration > Policies > Administrative templates > Microsoft Word 2016 > Word options > Security > Trust Center. 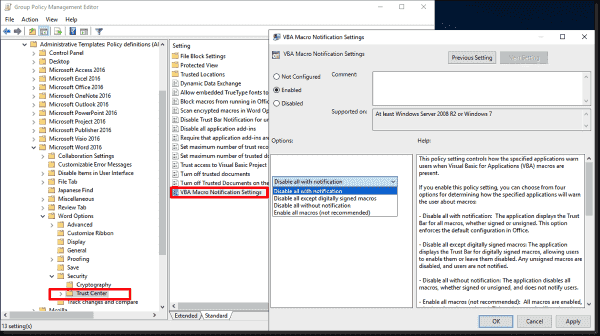 The macro notification setting offers four options; one of them allows only digitally signed macros

The first of the two options is Office's default setting and blocks all macros. However, in the notification bar, the user receives a message to this effect as well as the option to execute the code by clicking Enable Content. 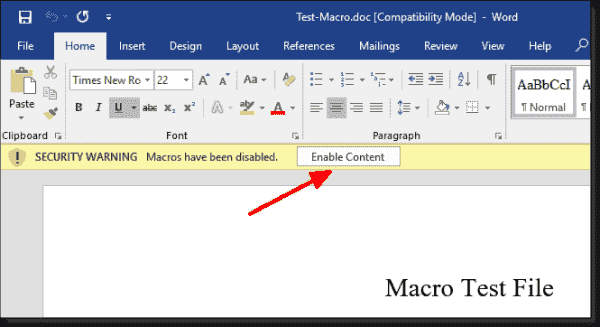 The default setting allows users to release all macros for execution

Do not run macros from the internet

A new addition to Office 2016 is the ability to block only code in documents that originate from the internet. You can configure it separately for each application and can also find it under Security > Trust Center ("Block macros from running in Office files from the Internet"). 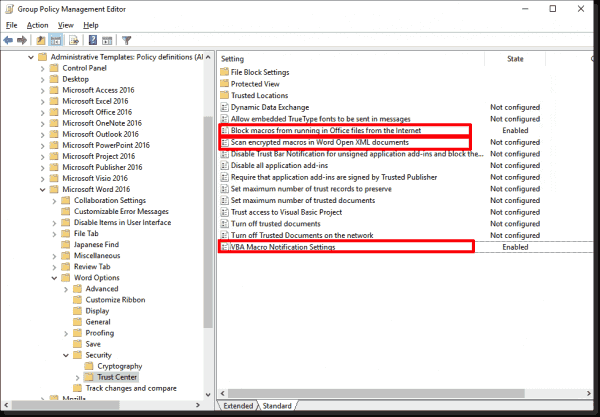 Office recognizes the internet origin of files from the zone information the Attachment Execution Service (AES) adds. This happens whenever downloading documents from Outlook, Internet Explorer, or similar applications.

By default, documents from the internet open in the protected view that does not run macros

By default, Office programs show such documents in the protected view. If you click on "Enable Editing," one of the measures you've taken against the uncontrolled execution of macros will take effect in the next step. This can cause digitally unsigned macros or simply those that originate from the internet to be blocked. 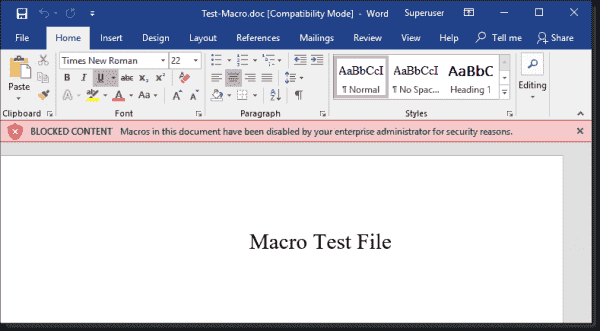 You can block macros in documents that originate from the internet

Allowing only the execution of digitally signed code can be too restrictive. To start proven secure but unsigned macros, you can store the documents containing the code in a directory you declare trustworthy.

However, one should exercise caution with this mechanism since it overrides the malicious macro protection measures described above. This also applies to internet documents, which then execute all macros despite a GPO blocking them. If, for example, a user comes up with the idea of marking his Downloads directory in the Trust Center as trustworthy, he could run all macros in downloaded documents without any restrictions. 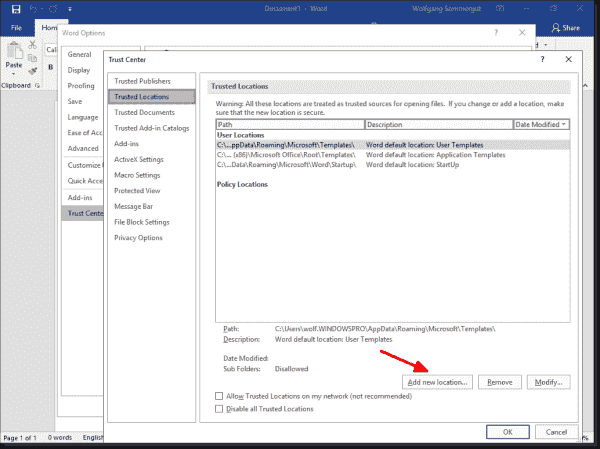 Therefore you should make sure only GPOs define such locations and not the user. To do this, deactivate the "Allow mix of policy and user locations" setting. Find it under User configuration > Policies > Administrative templates > Microsoft Office 2016 > Security settings > Trust Center. It applies to all applications. 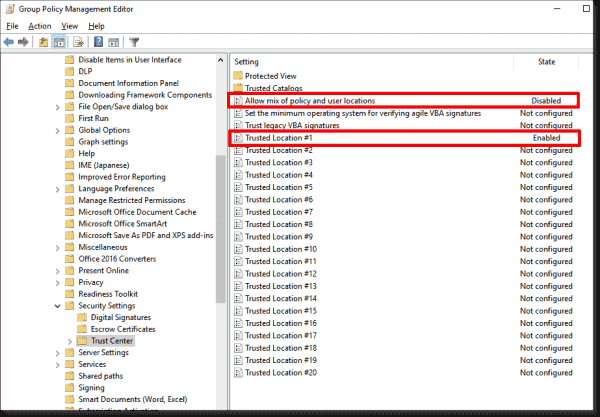 Use GPOs to prevent users from defining their own trusted directories

There you can add the directories to consider trustworthy for all applications. However, you can also define these for each individual application under their Trust Center.

Finally, there are two settings less intended for the interactive use of Office. The first setting is a protection against macros when automating Office using external programs ("Automation Security" under Trust Center of Microsoft Office 2016). 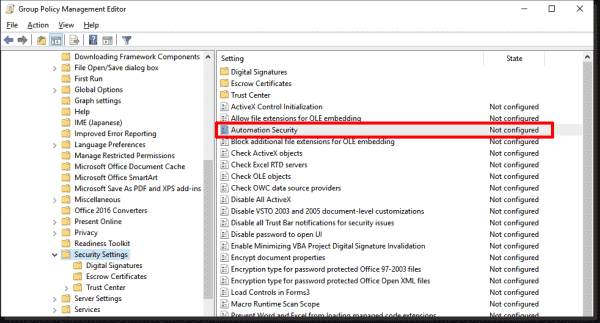 The Automation Security setting applies to all Office applications

The second setting allows you to force a virus scanner to check encrypted macros before execution. If such a virus scanner is not available, you can prevent such macros from starting here.