UPDATE: Thanks to the sharp eyes of 4sysops readers Vital and Ben, I’ve updated this post to correct some file system statistics. As you know, a technical article must be 100 percent correct or it becomes essentially worthless.

When I entered the information technology (IT) industry as a junior Windows systems administrator in 1997, New Technology File System (NTFS) was the only reasonable file system choice for Windows Server systems.

Recall that a file system is a mechanism for organizing files on a magnetic or solid-state hard drive. We apply a file system to a volume once we have (a) defined a partition structure; and are (b) ready to format that partition. In Windows, a formatted partition is typically assigned a drive letter for easy reference.

The chief advantages of NTFS are:

The list goes on. The way I describe NTFS to students is that “NTFS enables us to unlock the complete feature set of Windows Server.”

If NTFS is such as wonderful file system, then why did Microsoft develop the Resilient File System (ReFS) that is available in Windows Server 8 Beta? (Incidentally, I will refer to Windows Server 8 as Windows Server 2012 henceforth due to Microsoft’s formal adoption of that product name.)

It seems to me that Microsoft designed ReFS to grow with trends in storage technology as well as to complement its new Storage Spaces server feature. We’ll discuss more of both of these aspects later on in this review.

According to Microsoft, the following represent the chief design goals of ReFS:

NOTE: I have verified that Volume Shadow Copies work just fine on ReFS volumes. Therefore, you worried Windows systems administrators who rely upon this feature can heave a sigh of relief!

ReFS read/write performance is believed to be on par with that of NTFS.

Data Verification and Auto-Correction. This is a big selling point of ReFS. NTFS is known as a “self-healing” file system, but if you are like me you have nonetheless experienced partial or full file system corruption. One problem with NTFS is that files are stored as byte streams and file metadata is written and overwritten in-place.

By constrast, ReFS makes metadata updates without disturbing the original metadata. In addition, ReFS includes checksumming and “scrubbing” technology that proactively scans and repairs bad disk clusters. These aspects of ReFS are similar to those of the “cursed” WinFS file system that Microsoft was never quite able to get off the ground.

Scalability. As we mentioned earlier, ReFS was designed in conjunction with Storage Spaces. Storage Spaces is a Windows Server 2012 role service that enables us to create logical storage pools from multiple physical disks. The notion is that we can dynamically shrink and expand our storage pools without perturbing any data contained therein.

Storage Spaces also supports mirroring and striping, and has as its goal to make storage cheaper and more flexible for small businesses. After all, smaller shops tend to have “Just a Bunch of Drives” (JBOD) storage systems as opposed to the hardware RAID arrays embraced by enterprise environments. 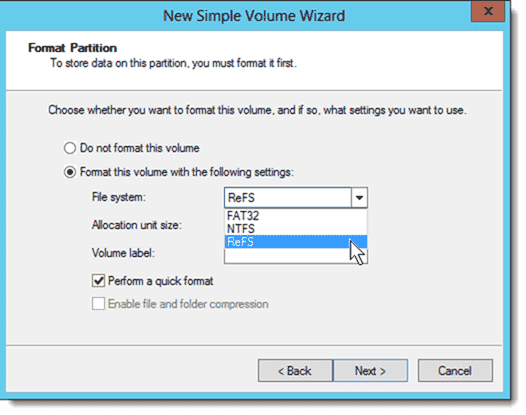 As of the Windows Server 2012 Release Candidate (Build 8400), ReFS cannot be used for boot drives. Microsoft states in their literature that ReFS is optimized for file storage and not process execution. Moreover, we cannot convert an existing NTFS volume to ReFS like we can convert a FAT32 volume to NTFS by using Convert.exe.

We also cannot format removable drives with ReFS. Finally, ReFS is available only in Windows Server 2012. Whether Microsoft will equip Windows 8 with ReFS support remains to be seen.

We can see ReFS in action first of all when we format a volume by using the Windows Server 2012 Disk Management console. The Simple Volume Wizard interface is shown in the following figure. 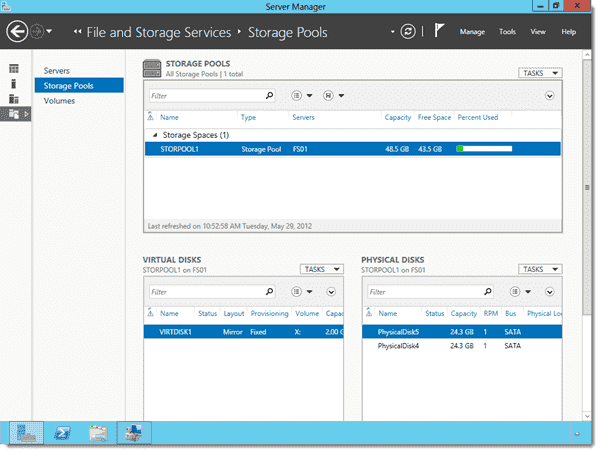 The second area where ReFS comes into play is the previously mentioned Storage Spaces role service. 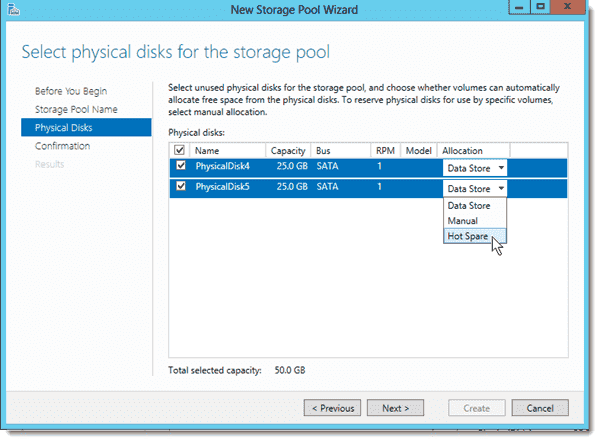 If you check out the related Internet resources I provide for you below, you will observe fiery arguments among the Windows systems administrator community with regard to ReFS. Some people claim that ReFS is a necessary upgrade to NTFS. Other folks claim that Microsoft is ripping off parts of the Sun/Oracle ZFS file system. Yet other folks decry that Microsoft should have leveraged parts of the ext4 or Btrfs file systems.

All those points are academic. The bottom line is that as Windows systems administrators we need to familiarize ourselves with the objective pros and cons of ReFS because this file system isn’t going away anytime soon. Please feel free to share your observations in the comments portion of this post.