Rename an Azure VM with PowerShell

Alex Chaika  Thu, Mar 16 2017Thu, May 25 2017  azure, cloud computing, powershell, powershell scripts  2
Recently I had to change the name of a few Azure virtual machines (VMs) and was quite surprised that there is no way to rename a VM in the Azure Portal or with a PowerShell cmdlet. Thus, I had to write a PowerShell script for the task.

Please note: I'm providing the script below as is. Use it at your own risk. It removes and then recreates the VM.

Note that even though the VM name changes, everything underneath it stays the same. Hence, if you named your Azure drives after the VM, the script won't change those names.

Let's go through the script:

As inputs for my script, I just need the cloud service name, the source VM name, the new VM name, and the subscription name. I think the variable names speak for themselves.

This part creates a log file ($file variable) to keep track of what the script is doing. I'm getting the date and time into the $dt variable and updating the console and log file using Write-Host and Write-Output.

Here I'm getting the VM object and storing it in the $vm variable. After that, I'm getting the Azure disk information and storing it in the $OSDisk variable. I only need this to get the storage account name, which I'm doing in the next step. I'll have to configure this storage account as current for the subscription I'm using. This is required to create a new VM from a configuration file.

Now I'm updating the log file and console again and then stopping the VM I'm going to rename. After that I'm just running a do-while loop to make sure the VM stops.

Next, I'm exporting the VM configuration into the XML file named in the same way as the source VM.

Finally, after completing all preparation steps, the renaming part begins. First, I'm checking if the XML file already exists using Test-Path and if it does, I'm getting its content into the $xml variable. Then I replace the RoleName node in the XML to the value of $NewVMName and save the XML file.

This is how it looks like inside of the XML file:

And now comes the scary part: Before importing the VM into Azure with the new name, I need to remove the old one with Remove-AzureVM. If you omit the -DeleteVHD option, the script won't remove the VHD drives.

I then wait for 30 seconds just to be on the safe side and then import the XML file with the new VM name using Import-AzureVM. I pipe this to the New-AzureVM cmdlet, which will have the new name.

This is what you see on the console until the VM stops:

The next screenshot shows the rest of the procedure up until renaming the VM. 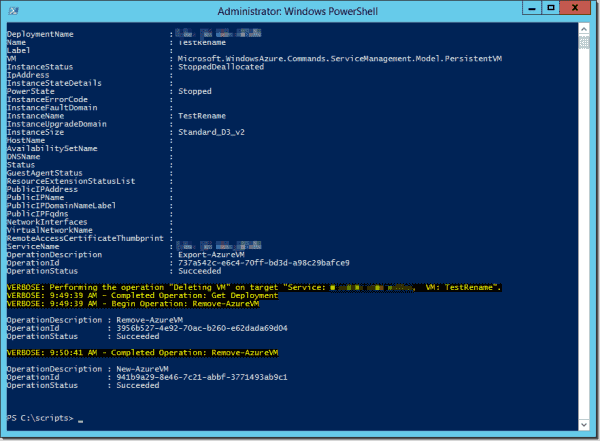