The first thing you notice when you launch the new release is that the interface looks more organized and polished. There are now six main tabs instead of the two tabs in version 4. If you’re using Remote Installer for the first time, you will find your way much faster. 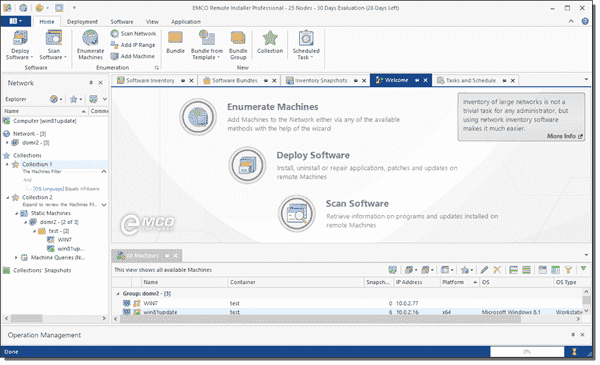 The Home tab contains the commands you will need most often—that is, deploy software, scan for software, enumerate machines, and so on. The Deployment tab has the more specific commands for application deployment, such as uninstall and repair. The Software tab is about the inventory features, the View tab allows you to select the visible panes in the main window, and the Application tab is about Remote Installer itself. Among other things, you can check for updates here or suggest new features.

The last tab is context sensitive and changes depending on the items you select in the program. For example, if you click an item in the Network pane, the tab will list the typical commands you need when you select computers. Or, when you are in the software inventory section, the tab will show the inventory tools. In addition, you can always right-click an item to get a context menu with similar commands.

The philosophy behind Remote Installer’s UI is that each command can be found at multiple locations. This makes the tool easier to use for beginners, but it also helps if you only work with it every now and then. In GUIs, you often search for a command at the wrong location simply because the command doesn’t fit into a certain category or because you don’t yet understand the logic behind the program.

EMCO solved this problem by putting the command at every location that makes sense. Of course, the problem then is that the interface looks overloaded at first sight. However, because the interface is highly customizable, you can just remove the panes that you don’t need. I think this is an interesting UI design approach.

Selecting panes in the View tab

A new feature of Remote Installer 5 is the software bundles. In version 4, when you created a software deployment task, you would directly add the setup file to the task. Software bundles allow you to now integrate the installer with its configuration and additional items that you can then assign to a deployment task.

Aside from the setup file, you can add items to a software bundle, such as MSI transforms (if the installer is an MSI file), pre and post actions (modify the registry, run an executable or script), additional properties (parameters for the installer, reboot behavior), and Windows Installer log settings (override the default log configuration). 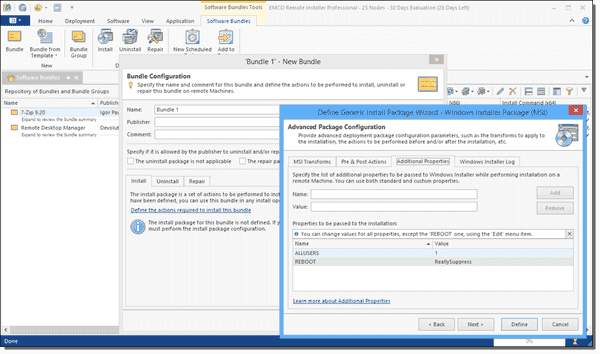 If you often have to create software bundles, you can base them on templates with some predefined settings. For instance, a template determines whether the software bundle is for Windows Installer packages or common executables. You can create your own templates or use one of the preinstalled templates, such as the Microsoft patch template or the multi-platform (32-bit and 64-bit) Windows Installer template. 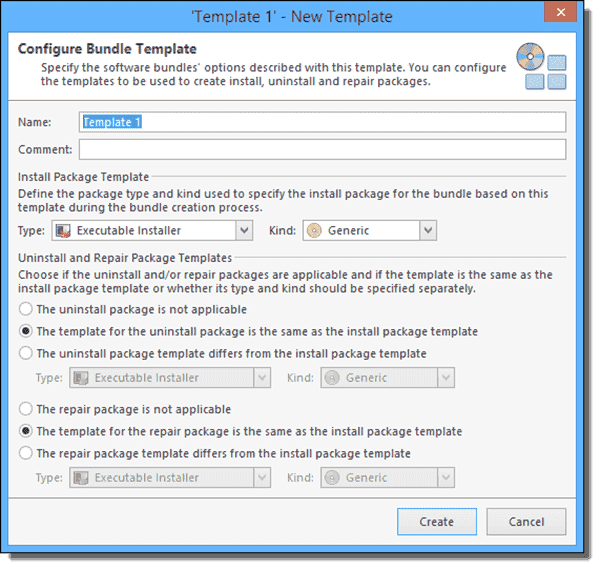 It is also possible to group software bundles. This enables you to assign multiple applications to a deployment task. Bundle groups are useful if you have applications that are always deployed together with other applications.

Another important new feature in EMCO Remote Installer 5 is the ability to group computers in collections. In previous versions, you could organize computers in custom groups to which you manually had to add the machines. You can now automate this task with the help of machine queries and filters.

You use a machine query to search for computer names or container names. Machine queries support various logical and comparison operators that you can combine. Alternatively, you can manually select Active Directory containers or previously defined collections that define the general scope of the members in your new collection. 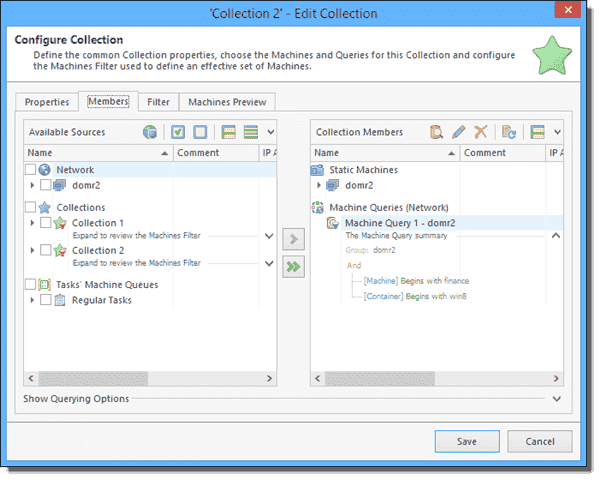 You can then further restrict the members by adding a filter to the collection. You can base filters on OS language, OS service pack, OS type (workstation or server), OS version, platform (32-bit or 64-bit), and software package (installed or not installed). 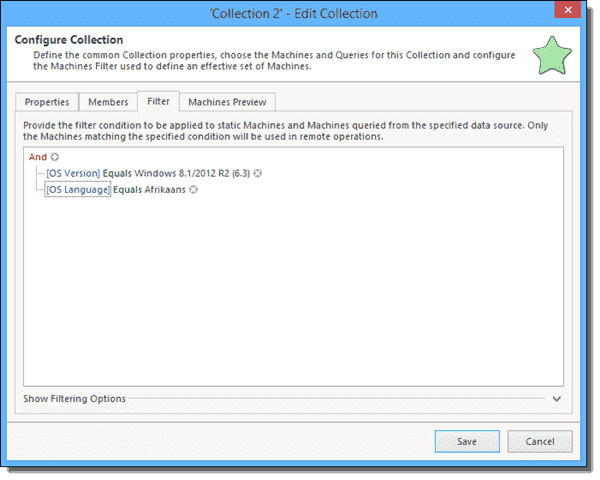 On the Machines Preview tab, you can then verify whether your collection definition really contains the machines that you want to target. The Network pane lists all your collections with their definitions. You can see only the static members that you added manually to the collection and not those that are added dynamically through a machine query. If you want to see which machines actually belong to a collection, you have to enter the collection’s definition and click the preview icon on the Machines Preview tab. 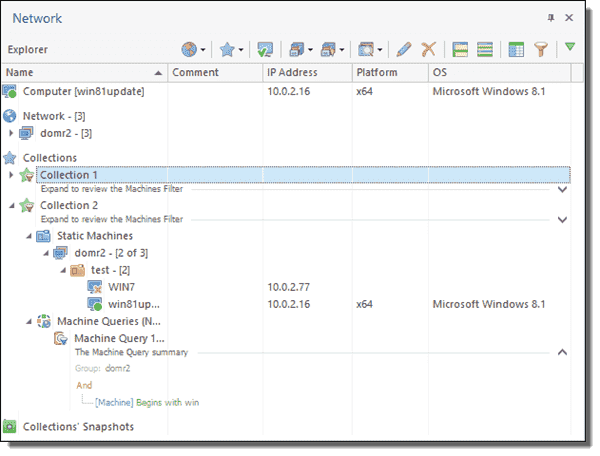 Collections in the network pane

Remote Installer 5.1 introduced new collection settings, which you can find in the tool’s preferences. You can either base machine queries on the inventory database (that is, on previous scans) or run a new network scan to determine the members of the collection. A similar setting is available for filters. You can automatically refresh the machine data before a filter is applied or load the data from the cache. 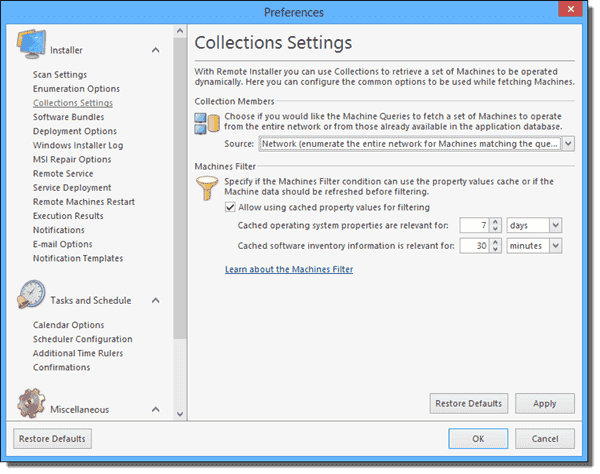 Note that the free version of Remote Installer lacks filters. You need the Professional edition if you want to restrict the members of a collection with the help of filters.

The All Machines pane has been improved with useful new features. I already mentioned that the filters you can use to define collections are based on typical machine-specific characteristics (OS version, service pack, and so on). This kind of inventory data wasn’t available in previous versions of Remote Installer.

The All Machines pane now allows you to add the new inventory characteristics as columns. You can then sort all the computers in your network according to a column and select the machine with certain characteristics. For instance, you could sort the machines according to the OS version and then select those machines in the same way you select files in File Explorer—that is, click a machine, press SHIFT, and click a second machine to select all computers in between.

Adding computer selections to a collection in the All Machines pane

Remote Installer will then change the display in the Software Inventory pane according to your selection. This allows you to get an overview of the installed applications of an arbitrary set of computers with just a few clicks. What I really like is that you can also use this selection to create a new collection or add the corresponding computers as static members to an existing collection.

I didn’t cover all the improvements and new features of Remote Installer 5.0 and 5.1. The main point about these releases is the revamped user interface and the introduction of new elements (software bundles, bundle groups, and collections) that allow you to reuse software deployment components.

This is a general trend I see in the development of system administration tools. GUI tools have come under criticism lately, primarily because they allegedly don’t allow you to “automate.” It appears to me that GUI tool makers are responding to this criticism by introducing more and more reusable components in their tools. These components are comparable to functions in scripting languages. A script is essentially a collection of functions that are combined and executed in a certain order.

In Remote Installer, you have several such components, such as software bundles, bundle groups, collections, deployment tasks, and so on, which you can combine to create new “functions” to adapt the tool to your environment and automate tasks.

Remote Installer is available as free and professional edition. Check out the feature list to compare the two editions.