Wolfgang Sommergut  Wed, Jun 30 2021Wed, Jun 30 2021  remote control, remote desktop services  2
RDCMan is for users who need to manage many RDP connections. This tool consolidates them into groups and thus allows settings and actions to be applied to a collection of hosts. Microsoft took RDCMan off the market in 2020 because of security flaws, but it is back now as part of SysInternals.

If you save RDP connections as configuration files (*.rdp) in folders, you can organize them by certain criteria, but you have to configure them all individually. The main advantage of RDCMan is that you can manage a group of connections in one place and find them easily using the search function.

The current version 2.8 of RDCMan already contains a group called Hyper-V Connections if the hypervisor is activated on a computer. Integration with Hyper-V, however, is limited to the optional starting of VMConnect. Starting or stopping VMs from RDCMan, for example, is not possible; you must query even their ID using Get-VM and copy it into the corresponding field. 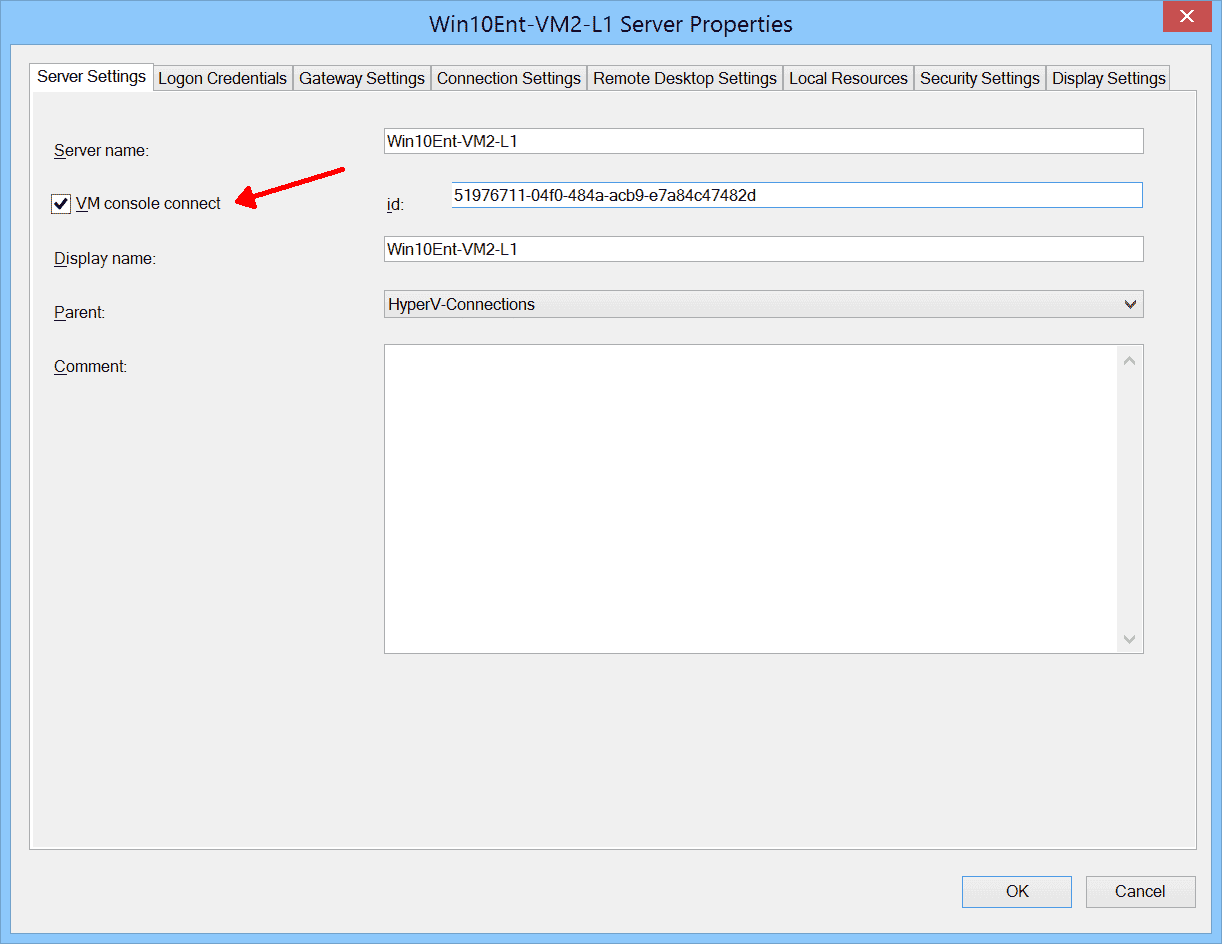 If you want to add additional groups, you have to create a separate file (*.rdg) for each group.

Hosts can either be added to a group individually via the Edit > Add server menu or imported from a text file. When added manually, RDCMan supports different patterns, such as server[001-15], to create entries for server001 to server015.

When imported from a file, the file must contain one host name per line; no other settings can be passed to the tool in this way. 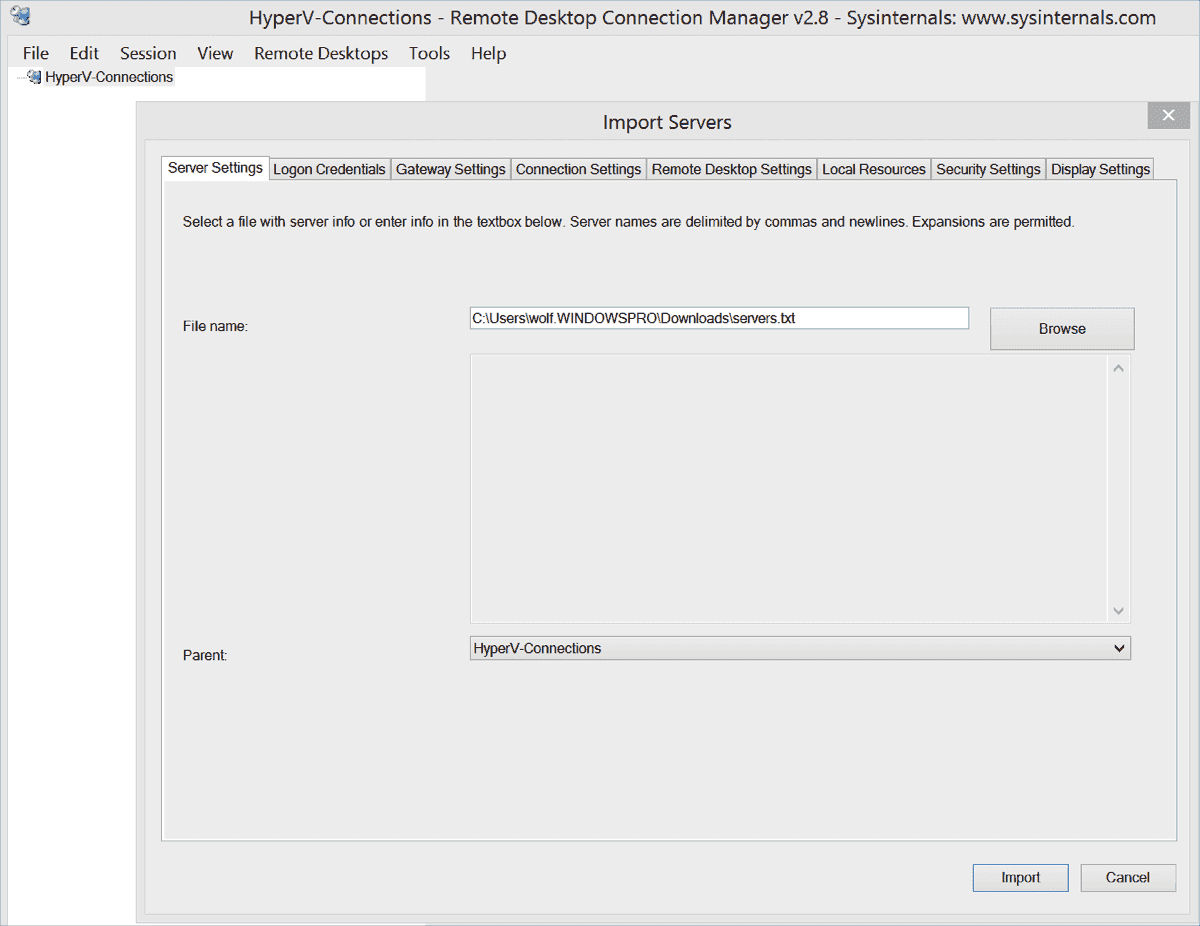 Importing hosts from a text file into a group

For example, if you want to migrate your server list from the alternative connection manager mRemoteNG to RDCMan, you first export it as a CSV file. You can then use PowerShell to extract the names and write them into a text file using a command like this:

The display name and any description must then be added or changed manually because this data cannot be imported. Alternatively, you could read the names of hosts from Active Directory since the tool itself is not able to query AD:

In practice, of course, you would use a filter other than '*'.

By default, all new connections inherit the group settings. This enables you to specify in one place the login credentials, which RDS gateway you want to use, or which screen resolution you prefer. However, you can override this inherited configuration for individual hosts. 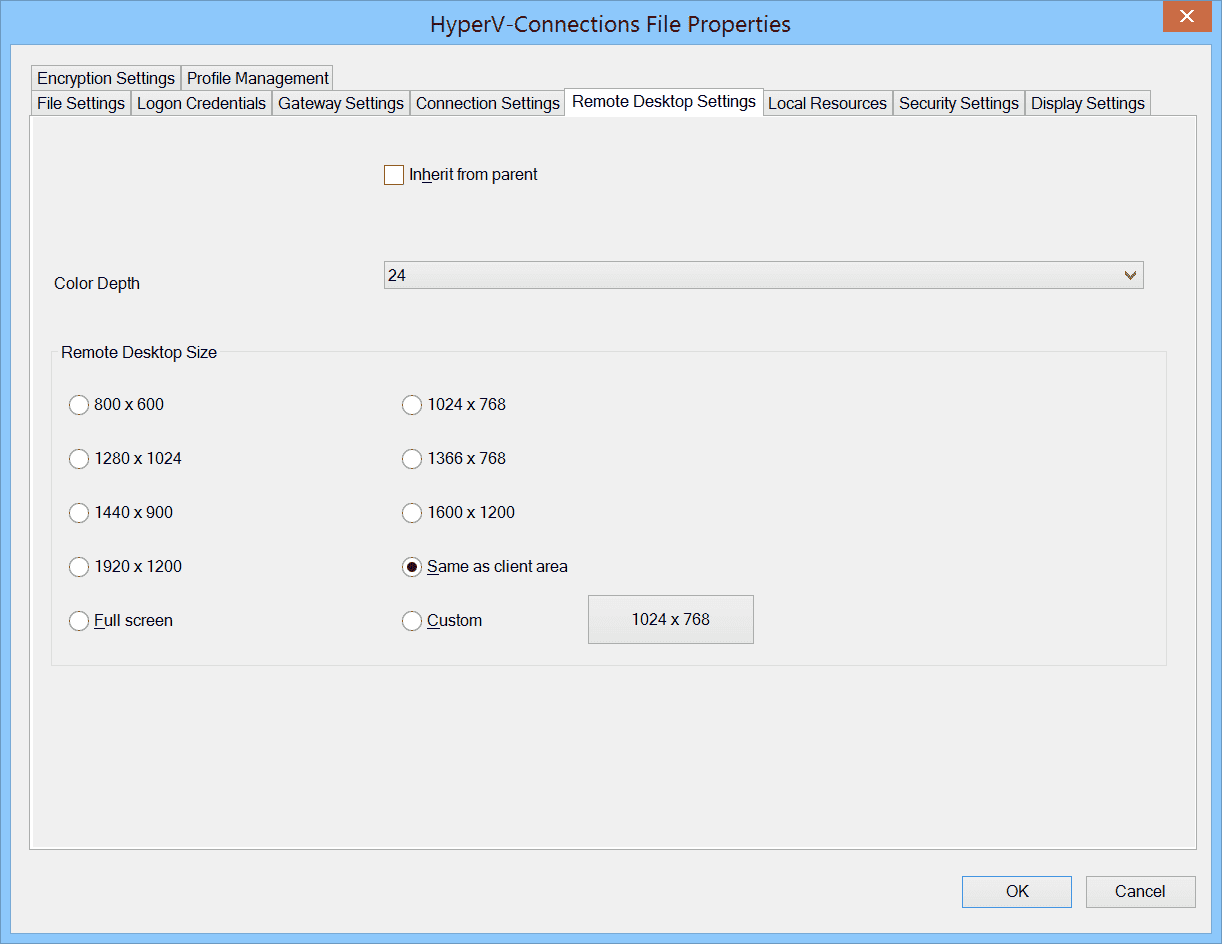 For the display, you can choose a fixed size, full screen, or the dimensions of the RDCMan client area. The latter option promises a flexible resizing of the remote desktop, but the tool does not offer this capability.

Display is no longer up-to-date ^

If you enlarge or reduce the window size, you have to reconnect the session to adjust the display. In this respect, alternatives, such as mRemoteNG or PremoteM, are clearly better. 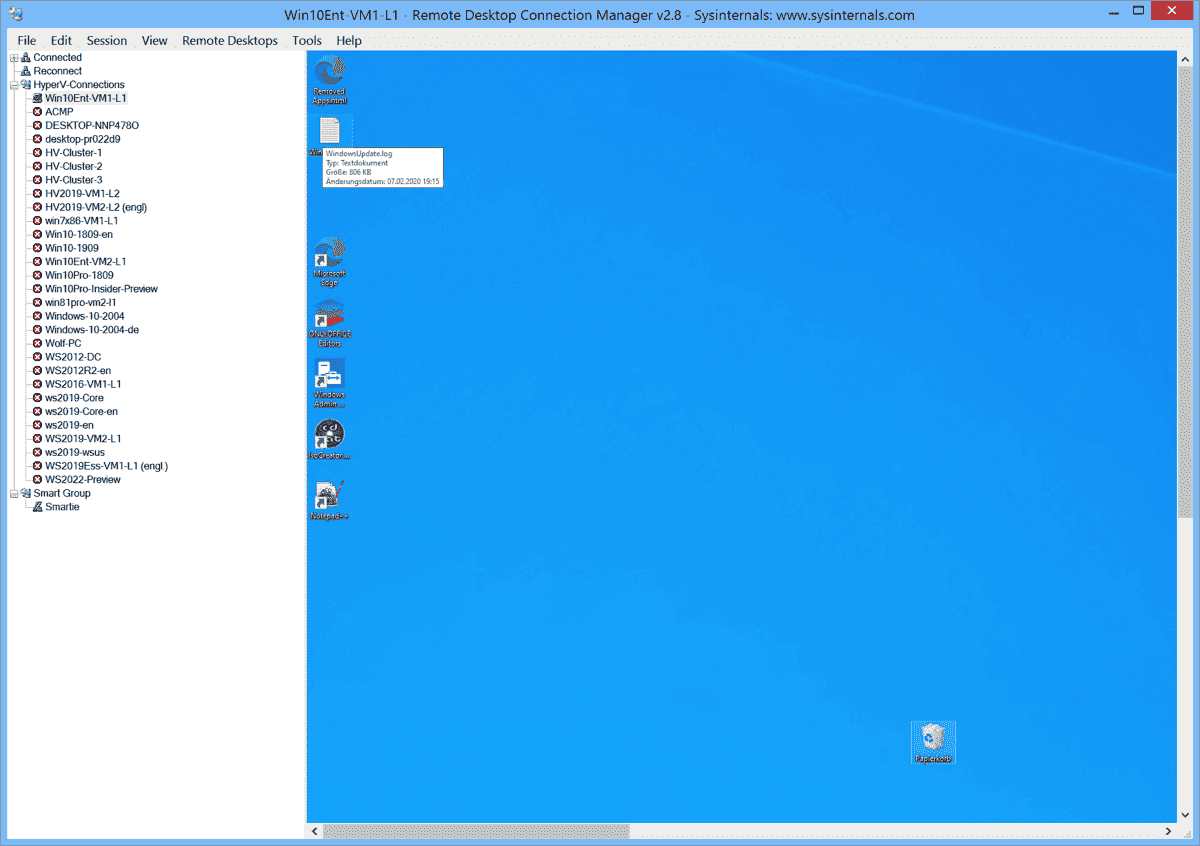 This is also the case when scaling text and symbol sizes in the remote session on high-resolution monitors, where the two mentioned tools excel; however, RDCMan has nothing to offer.

In addition to static groups, RDCMan also offers dynamic groups. One type is called a smart group because its members can be selected with filters. 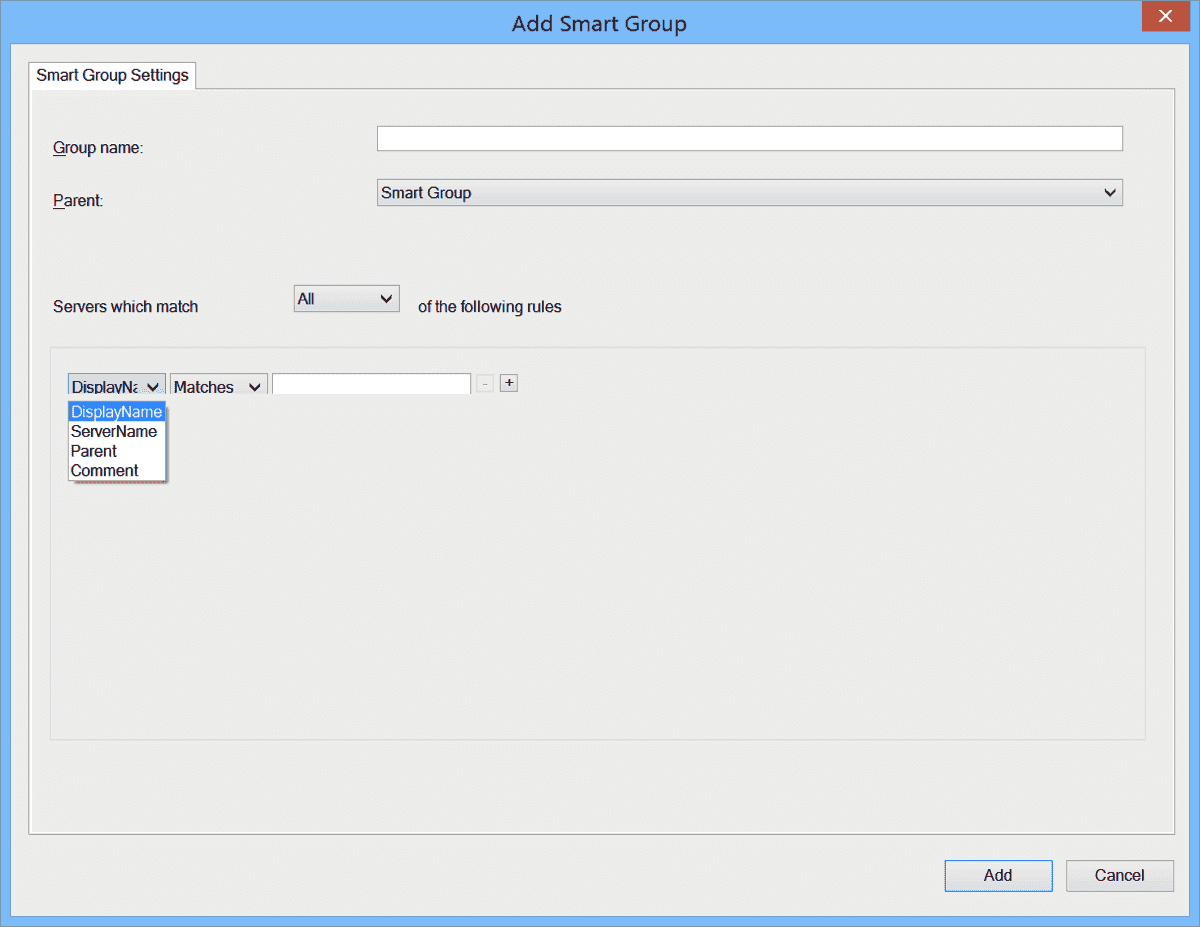 To do this, you enter substrings that must appear in the display name, host name, parent group, or description. It should then display the matching hosts; however, it often displays none at all, depending on where in the hierarchy this group is located.

A handy feature is the built-in reconnect group. RDCMan will try to reconnect its hosts after the connection is lost. A typical application for this feature is when a host needs to reboot because of an update or after adding a server role.

Other predefined groups include hosts to which you connect ad hoc without adding them to a group, those on which you have an active session, and the most recently used connections.

Groups serve as organizational units in RDCMan to centrally adjust the settings for all included connections. In addition, you can connect to all hosts in a group at one go. The sessions then appear as thumbnails in the right-hand panel. 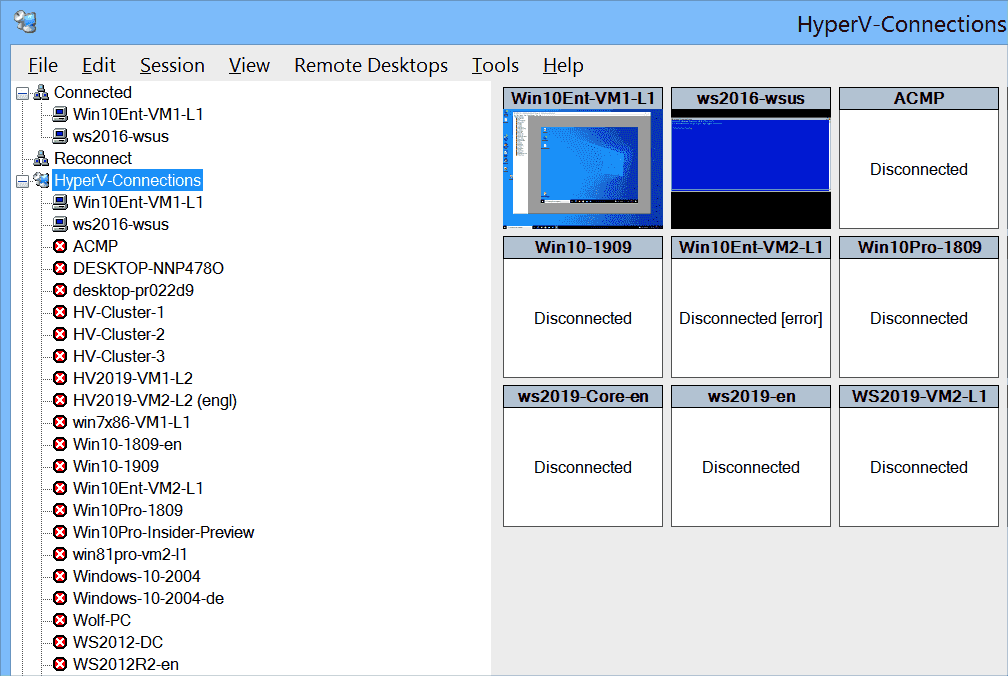 However, it is not possible to select only specific computers in a group and establish connections with them.

All in all, RDCMan 2.8 is functionally on the same level as version 2.7. What is new, however, is a feature common to SysInternals: you do not have to install the tools but only unpack and run them. This is now also true for RDCMan 2.8, which can be downloaded here.

If Mark Russinovich is serious about saving RDCMan, then simply re-releasing it after the security bug has been fixed will not be enough.

Currently, the tool has so many shortcomings that it is no real alternative to the open-source competitors mRemoteNG or PremoteM. Microsoft would have to put way more effort into its development.