In my last post, I gave an overview of the advantages of a P2P OS deployment. Today, I will outline how OS deployment works with DistriBrute. More information about this contest can be found at the end of this article. 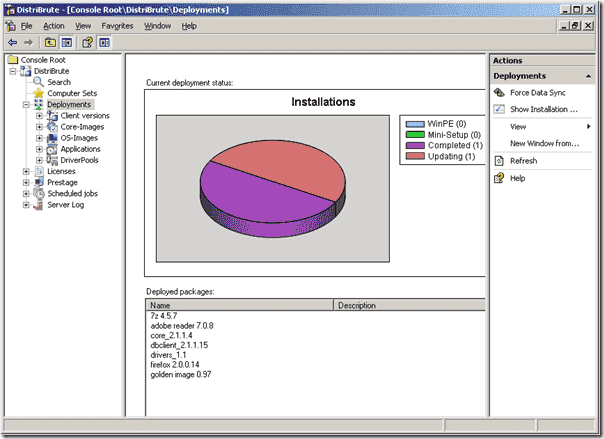 If you are already familiar with Windows deployment, then you will have no difficulty understanding how DistriBrute works. Even though P2P deployment is technically quite different compared to the centralized approach of conventional OS deployment solutions, the steps you have to perform to prepare an OS image and distribute it to desktops are quite similar.

DistriBrute uses the Windows Imaging Format (WIM). Thus, you can use WAIK tools to prepare and manage OS images. First, you have to create the master image by installing Windows with applications, configuring the desktop, etc. on your master PC. Then you sysprep the installation and capture the image with Microsoft's free Windows Deployment Services (WDS), for example.

The sysprepped WIM file can then be imported with the DistriBrute console. To deploy the master image, you need a core image that is based on Windows PE. Like most OS deployment solutions, DistriBrute uses Windows PE to prepare the hard disk partitions and to install the master image. You can use the Windows System Image Manager of the WAIK for creating answer files, and you can run unattended installations just as with Microsoft's desktop deployment solutions. Thus, if you are familiar with image-based Windows deployment, you already know all the essentials for creating OS images for DistriBrute.

Once you have created the master and core images, you have to assign them to one or multiple computer sets in the DistriBrute console. Computer sets are based on Active Directory containers (OUs) or computer groups. You can also manually add single computer objects to a computer set. 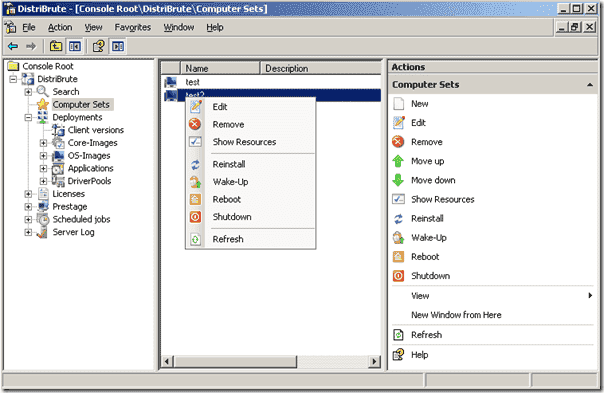 It is also possible to assign driver pools (collections of plug-and-play drivers) to computer sets, which enables you to deploy a so-called "Golden image" that only contains the required mass storage drivers.

DistriBrute supports bare metal installations through PXE, USB stick or with boot CDs. Once the desktop has been installed by DistriBrute, you can then either schedule the deployment process or initiate it manually. The integrated Wake-On-LAN (WOL) feature allows you to turn on computers remotely before the deployment starts. It is interesting to note that DistriBrute clients can act as WOL proxies on a network segment. Thus, WOL also works across routers if one machine where the DistriBrute client is running, is online in the target subnet.

On machines where you install Windows the first time with DistriBrute, DistriBrute will format the hard disk and create a cache partition where it will copy the core and master images. Both images will stay there after the master image has been installed in the root partition. Thus, if you have to reinstall, no additional download is required. The DistriBrute client will also use the images to seed the data to the P2P network.

The DistriBrute client is automatically installed as a service after the master image is extracted with Windows PE. New client versions can then be deployed through DistriBrute's P2P network. 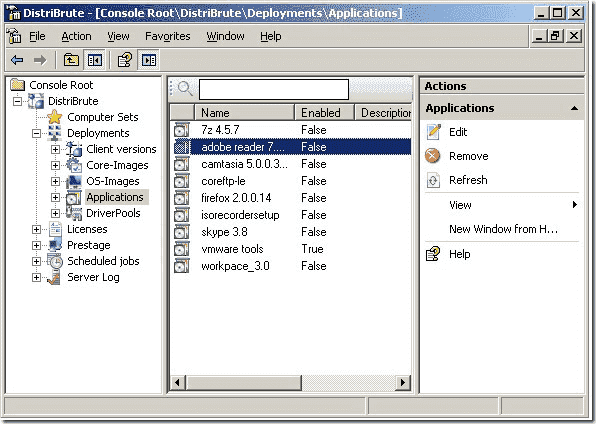 Note that end users can't manipulate the contents of the cache partition and clients only accept data from other DisitrBrute seeders of your corporate network.

Even though you can control the whole OS deployment process with the DistriBrute console, you can also use a third-party desktop management solution to leverage DistriBrute's P2P network once it has been created. For instance, you could use Microsoft's Configuration Manager to launch a script that activates DistriBrute's cache partition and restarts the computer to reinstall Windows. The big benefit here is that you no longer need decentralized secondary site servers which reduces server TCO and helps improve your green IT contribution.

Deploying Windows and software with DistriBrute is quite similar to conventional OS deployment solutions, although the technology behind the scenes is different. The main advantage of the P2P deployment method is the very efficient way in which large files are distributed to many computers. By distributing the download process on the whole network, OS images and software packages can be delivered much faster and more reliably than with the central deployment approach. Please have a look at this table for a comparison between DistriBrute and SCCM 2007.

It is interesting to note that this allows you to centrally and quickly deploy OS images in a way that is similar to VDI. But instead of storing your master image with all applications just once on a central server, you have it on all your desktops. Obviously, the latter approach is much more robust. And since the P2P technology allows you to deploy large images through slow internet connections, your users in faraway branch offices can enjoy the full desktop experience of conventional PCs instead of having to work with the limited UI capabilities of virtual desktops. And if the connection to your datacenter is not available or if central servers go down, all your clients still work and can even continue with deploying new images.

In a way, DistriBrute's P2P approach makes use of the original idea of the internet creators. Instead of hosting your whole computational infrastructure at a central place, everything is distributed in a robust network, thereby reducing the risks of single points of failure.

To better understand how you can deploy OS images and applications with DistriBrute, have a look at these demos. Change the resolution to 728p (HD) after you start the video and then resize the window to full screen to get a better view. The videos have no sound. Also check out this case study of DistriBrute at the University of Canberra, Australia.

To participate in the competition for a chance to win one of two DistriBrute licenses, worth 3750 euro (ex. VAT) each, please send an email to:

Please also add your full name and your organization if applicable.