4M88 ICT Solutions, the publisher of DistriBrute, a P2P desktop deployment solution, is raffling two 250-seat licenses worth 3750 euro (ex. VAT) each. More information about this contest can be found at the end of this article. 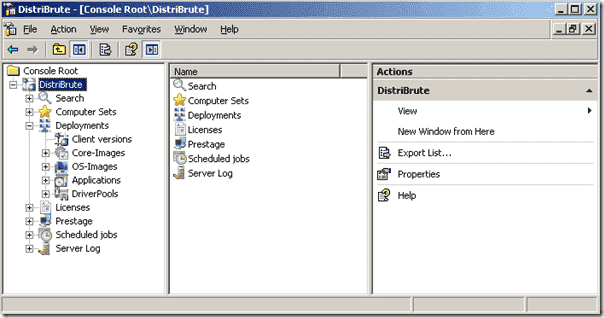 Note that 4M88 ICT Solutions also offers a software deployment solution called DistriApps that allows you to use the P2P network to deploy and install MSI packages. Although the DistriApps functionality is included in DistriBrute, I will mostly focus on the OS deployment features in this review.

Since you’re an IT pro, you are most likely familiar with peer-to-peer (P2P) technology. BitTorrent and Skype are currently the most prominent P2P solutions. BitTorrent is used by many big companies for offering large downloads. DistriBrute is desktop deployment software that works in a similar way.

Just in case you think you spotted a spelling error, DistriBrute is indeed the correct name. I think the name fits quite well because DistriBrute not only distributes operating systems and applications but also does it in a vigorous way.

BitTorrent became so popular because it is an ingenious way to download and distribute large files very rapidly by maximizing the usage of bandwidth and server resources. Obviously, when you deploy an operating system or a big software package to a large number of desktops, you have exactly the same problem as when you offer large downloads on your web server.

The DistriBrute server works like a supernode, whereas the clients are just normal nodes. The supernode is only required to initiate the P2P process. But as soon as clients have downloaded part of the data, they will start seeding it in the P2P environment. 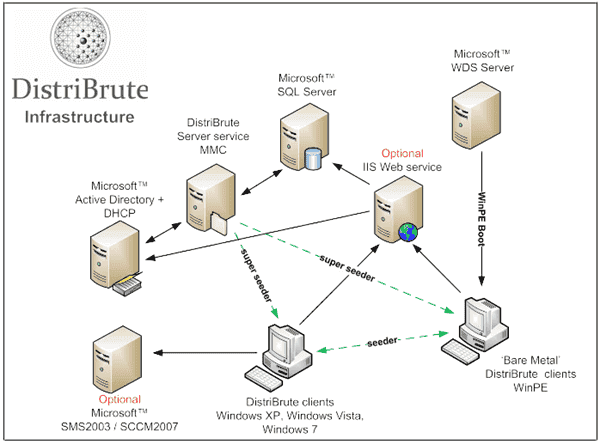 That is, instead of downloading OS images or software packages from a central server, DistriBrute clients can receive files from nearby PCs that already have the corresponding data. This reduces the load on servers and network infrastructure and speeds up desktop deployment significantly.

Unlike multicast technology, P2P is more flexible and robust because the data is distributed asynchronously. Thus connections with low bandwidths won't slow down the deployment processes and clients that are unable to keep up with the pace of the multicast network won't drop out.

In particular, if your organization has many branch offices with relatively slow network connections to your deployment server, then P2P desktop deployment is very efficient because every bit has to be transferred only once through the slow connection.

P2P also increases the robustness of desktop deployment because it does not only rely on one server and one network connection. Once a DistriBrute client knows which packages have to be installed, it will just download the data from wherever it can get the missing data on LAN speed.

This also means that interrupted downloads won't cause failures in the desktop or software deployment process. DistriBrute clients will resume its connection and carry on downloading and seeding.

When a package download is completed, the DistriBrute client stores the corresponding files in its local cache, where they stay until you remove the packages in the DistriBrute console. This is advantageous not only because other clients can download the data from there but also because every client can reinstall the OS or software without needing to download those items again.

Thus if an end user has messed up his Windows installation, the desktop can be "reset" at the touch of a button by reinstalling the OS with all applications that are assigned to this PC. Since no download is required, this process is very quick. In most cases, this method is faster than having an admin clean up the mess.

Of course, you have to ensure that users don't lose their personal data. But this is no problem if you work with roaming user profiles or let users store their data on a second drive.

Since desktop deployment is so efficient with DistriBrute, you can distribute new images more frequently than with a conventional desktop deployment solution. For instance, instead of deploying a new Windows Service Pack or a large software package such as Office 2010, you might as well deploy a new OS image that contains the additions. This ensures that all your desktops will have a common basis and run a configuration that you have tested thoroughly in the lab.

In my next post, I will explain in more detail how you deploy OS images with DistriBrute. Until then you might want to have a look at the demo above that shows DistriBrute’s P2P functionality. I recommend changing the resolution to 728p (HD) after you start the video and then resize the window to full screen. The video has no sound.

To participate in the competition for a chance to win one of two DistriBrute licenses, worth 3750 euro (ex. VAT) each, please send an email to:

Please also add your full name and your organization if applicable.