You will notice that some of these concepts are defined differently by different authors. I don’t claim that the definitions and explanations here have any objective value. However, I hope that you will find my opinion about these terms useful, if only because it helps you develop your own understanding of the terms when you reflect why you disagree with me. 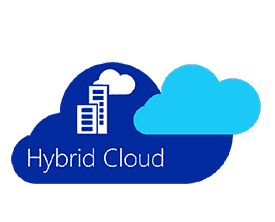 When the term cloud computing was first introduced, vendors of conventional enterprise software were quick to invent the term private cloud so they could claim that they can do cloud computing, too. Of course, the first cloud providers immediately protested that this term doesn’t make sense. Nowadays, the IT community agrees that private clouds exist. As long as the five characteristics of my last post can be applied, it is justified to talk about cloud computing. It doesn’t really matter if the consumers are only from one organization and the cloud therefore is private.

Of course, if there is a private cloud there must also be a public cloud—a cloud that is not restricted to a particular group of consumers. If someone asks you which was first (private cloud or public cloud), you have to ask back whether he is talking about “public cloud” and “private cloud” or private cloud and public cloud. Yeah, sometimes concepts only come into existence after the things they denote, even if those things were invented by humans.

The term hybrid cloud is often misunderstood. A typical example can be found at SearchCloudComputing. The idea is that if an organization uses the services of a public cloud provider in addition to its private cloud, say for particular services, then this organization has a hybrid cloud. This is like putting a donkey and a horse in a stall and then claiming that you just created a mule. The key of a hybrid cloud is that the private and public clouds interact with each other. For instance, a solution that automatically moves virtual machines from the private cloud to the public cloud at peak times could be considered a hybrid cloud. Likewise, if the horse and the donkey interact and have some fun, you might get a mule eleven to twelve months later.

Vertical clouds are tailored to a particular industry, such as healthcare or finance. Some authors also use the term community cloud. I don’t like this expression because it sounds as if the consumers of the cloud have to interact in some way. Some analysts believe that vertical clouds are the next big thing. I think this remains to be seen. Just as retailers that are specialized on a certain product type now have a hard time competing with “everything stores” like Amazon, so will vertical cloud providers find it difficult to keep up with Amazon’s versatile “everything cloud.”

Please let me know if you agree or disagree with my characterization of these cloud terms. In my next post, I will discuss popular cloud concepts such as IaaS, Saas, and PaaS. I will also outline why I think that many definitions you find on the web are confusing.