Wolfgang Sommergut  Mon, Apr 6 2020Mon, Apr 6 2020  firewalls, security  5
The SMB protocol has repeatedly proven to be a weak point that hackers exploit for their attacks. CVE-2020-0796 is the latest example of this. In addition to installing patches to mitigate known vulnerabilities, you should only allow the most necessary SMB communication on the computers in your network.

The recently discovered remote code execution vulnerability affects SMB 3.1.1, which is used in Windows 10 1903 and 1909. The March cumulative update (KB4551762) includes a fix for this issue. It is distributed as usual via WSUS and Windows Update. For offline patching, it can be downloaded from Microsoft's catalog.

Querying the status of services ^

In order to be better prepared for future vulnerabilities in SMB, computers that do not share directories or printers should not respond to SMB requests.

However, there is a threat not only from malicious access to a PC but also in the other direction, when the PC connects to a compromised SMB server. The simplest solution would therefore be to deactivate the LanmanWorkstation and LanmanServer services. You can check their status in PowerShell using the 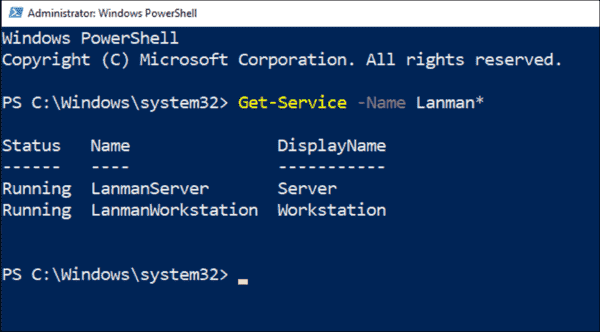 Querying the status of Lanman services with PowerShell

The problem with this approach, however, is that machines in a domain need the workstation service to retrieve group policies from a domain controller (DC). In addition, virtually all companies use a file server or NAS that would not be accessible without the SMB client.

Hence, even if the server service is switched off, it is still necessary to secure the client. One measure is to make sure that SMB1 is not installed. Normally, no modern system or application should require this outdated protocol anymore.

In newer versions of Windows, SMB1 is disabled by default. You can verify this in PowerShell by using the following command:

and if necessary, to uninstall it using

Using PowerShell to check if SMB1 is installed

Blocking SMB connections to the Internet ^

Since you can't simply do without SMB in Windows domains, firewalls must be used to restrict access. SMB communication to computers on the Internet is usually not necessary, especially if it is initiated from outside. Therefore, port 445 should be closed on perimeter firewalls for incoming and outgoing traffic.

To prevent internal attacks, configure the Windows Defender Firewall on machines that do not share resources and block access to these services:

Checking the status of the rules ^

The namesake rules are deactivated in Windows 10 by default for all profiles. PowerShell can verify this with: 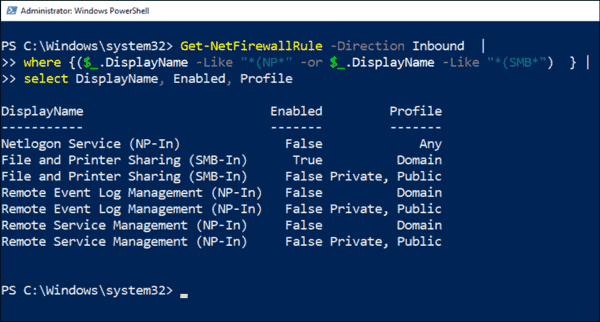 Microsoft also recommends creating an additional rule to block port 445 for incoming traffic and not to rely only on the default settings. The default rules could inadvertently be activated by installing a software package so that PCs answer incoming SMB requests. 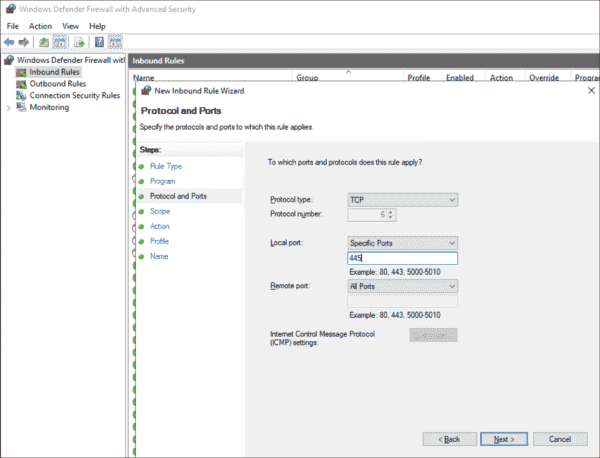 Such a port rule should apply to TCP, all remote computers, programs, and profiles. In centrally managed environments, it can be distributed using group policy.

Windows servers have the same default rules for port 445 as Windows 10. If file/storage services are activated, such as on DCs or file servers, then at least the File and Printer Sharing (SMB inbound) rule will also be enabled.

In this case, you could deactivate this rule and create your own that limits access to certain IP addresses. With PowerShell, you could do it like this:

For RemoteAddress, you can also specify a range in the form 1.2.3.0-1.2.3.100. Alternatively, this parameter accepts predefined constants such as DNS, DHCP, WINS, DefaultGateway, Internet, or Intranet, but these are not documented. LocalSubnet speaks for itself, which will fit in many cases.