Low responsiveness is the most common reason why people think that their computer is slow. Usually they blame the operating system, and in particular Vista. However, assuming that the hardware is as modern as the operating system, the real culprit is usually an application that had gone mad. This doesn’t necessarily mean that the program has crashed and is in an endless loop that is consuming all of your processor power. Some applications just misbehave by pushing other programs aside, claiming most of the resources for themselves. Sometimes it can take several seconds for a program that has already been loaded to respond to a mouse click. 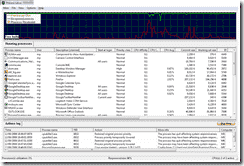 Process Lasso has a couple of other features that can be helpful in improving the responsiveness of a computer. You can configure default process priorities, default CPU affinities, boost foreground processes, configure disallowed processes, limit the number of instances of a program and more.

Process Lasso is only free for private and academic use. The prices for the professional version start at $24.95 per seat.