Kyle Beckman  Tue, Mar 11 2014Tue, Mar 25 2014  deployment, patch management  4
You can prevent the Windows XP End of Support Notification in the Registry, with a script, and through Group Policy Preferences. In this post you will learn how. 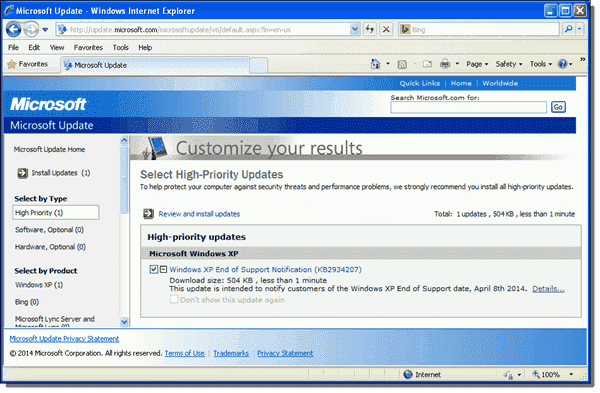 This update installs a new executable C:\Windows\System32\xp_eos.exe that shows an End of Support message when launched.

Unfortunately, Microsoft didn’t really give us much warning on this. Yes, you would have to be living under a rock to not know about the April 8, 2014 support cutoff for Windows XP if you’re a Windows IT Pro, but a little more warning before throwing up a warning to end users on XP would have been nice, Microsoft. Now that this update has been released, how do we get rid of the popup?

Use WSUS, SCCM, or InTune ^

If you’re using Windows Server Update Services (WSUS), System Center Configuration Manager (SCCM), or InTune to manage updates for your Windows systems, there’s nothing else you need to do. Microsoft updated their blog post that announced the Windows XP EoS Notification on March 4, 2014 to include that they will not be publishing the XP EoL notification hotfix to systems that are managed by SCCM, WSUS, or InTune. We’ve had one report of the update making it onto a WSUS server in the comments, but I haven’t seen it show up on any WSUS or SCCM boxes.

If you’re not managing your updates via WSUS, SCCM, or InTune, I highly encourage you to look into one of those products. I’ve been stung multiple times by updates that were installed on Patch Tuesday only to be pulled shortly after their release. Managing the rollout of updates allows you to not only test your internal applications with the new updates, but also insulates you from things like the Windows XP EoS Notification that was sprung on everyone very last minute.

The good news is that if the Windows XP EoS Notification has been installed on a system, it can be prevented with a simple Registry entry in either the HKLM or HKCU areas of the Registry. If you click through the pop-up, it will actually set the Registry key in both HKEY_CURRENT_USER (for the currently logged in user only) and HKEY_LOCAL_MACHINE. 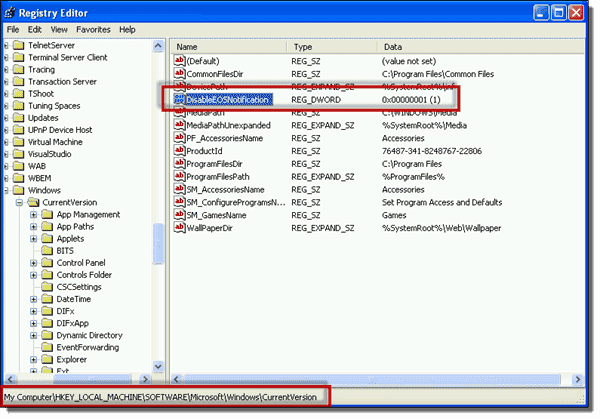 Setting this key in the user area (HKCU) of the Registry will prevent that user from seeing the message again. Setting the key in the machine location (HKLM) of the Registry will prevent all users of the system from seeing the XP EoS Notification. In fact, if you try to manually run the C:\Windows\System32\xp_eos.exe executable if either of these Registry entries are set, it closes silently and the end user never sees anything.

You can use a Startup Script that runs when the computer starts to set the Registry key for all users on the computer. First, you’ll need a short batch file that looks like this:

In a Group Policy Object, go to Computer Configuration > Policies > Windows Settings > Scripts (Startup/Shudown). Double-click on Startup. In the Startup Properties screen, you can click the Show Files button to copy over your script and then Add… to select it. 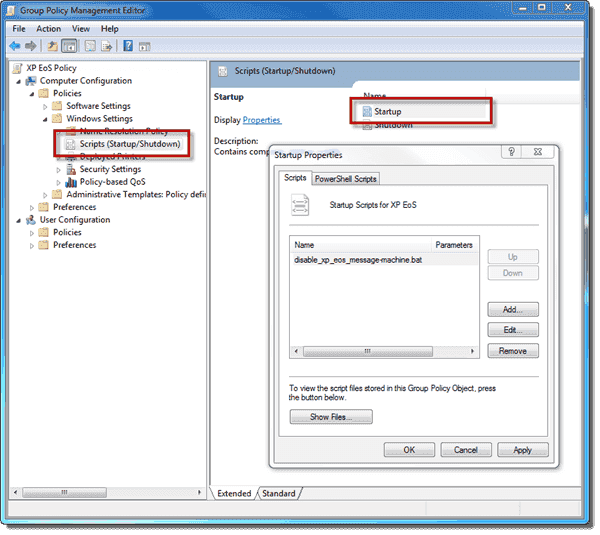 You can easily do the same thing by setting a Logon script for users (using the HKCU Registry keys from earlier) if it is necessary to control this policy on a user-by-user basis in your environment.

You can also set the Registry entry using Group Policy Preferences if you’ve installed the Client Side Extension on your XP boxes. 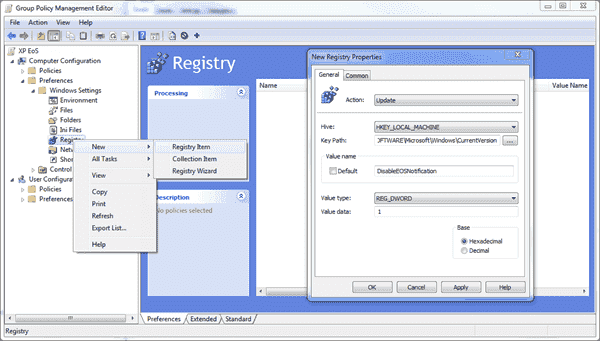 In the New Registry Properties, set:

So what happened to Windows XP Professional x64 Edition in all of this? If you take a look at the KB2934207 knowledge base article, you’ll see that the Platform is listed as x86 and x64 isn’t listed.

A quick manual run of Windows Update on a Windows XP x64 box shows that the update isn’t showing up like it is on x86. So what happened to Windows XP Professional x64? Support for the 64-bit Edition of Windows XP ends on April 8, 2014 just like the 32-bit Edition. So where’s the End of Support notification for x64?

If I had to make a semi-educated guess, the usage of Windows XP x64 is so low that Microsoft felt it didn’t justify releasing a version for x64. It’s entirely possible one will be release, but as of the writing of this article, there’s isn’t one.

In the next post of this series I will discuss the question whether you should get rid of Windows XP or not.