Michael Pietroforte  Tue, Mar 17 2015Wed, Mar 18 2015  powershell, powershell beginner  5
The properties of the PSVariable object allow you to store a Description in your variable. In addition, you can configure the Visibility, Options, and Attributes for variables.

In my last post, where I demonstrated how you can use the Get-Variable cmdlet to debug your PowerShell scripts, I mentioned the PSVariable object. Today, I will take a closer look at this important PowerShell object, and we’ll discover what things we can do with it.

In the second command, we select all of the variable’s properties, including the hidden ones (properties that are not displayed by default).

Displaying all properties of a PSVariable object

Note that other variable object types exist. You can use the following command to get a list of variable types available in the variables of your current scope:

It won’t surprise you that the variable Name is another object property. The Description property can be useful if you want to document the purpose of a variable. The advantage over documenting in comments in your script is that you can easily see the descriptions of all variables that you list.

To store a Description in a variable, you use the Set-Variable cmdlet:

You can also assign a Description when you create the variable with the New-Variable cmdlet:

To view the Description of a particular variable, you can use the Get-Variable cmdlet, as in the first example in this post. This works, too:

Setting a description for a variable

To display the variables with their descriptions in your current PowerShell session, you can run this command:

The Visibility property of a PowerShell variable can have the values Public or Private. Public is the default. Don’t confuse this property with the Private scope. The Visibility property allows a developer of a PowerShell module to hide variables. If you import a module with variables where Visibility is set to Private, you can’t view or change the variable on the console even if it is in the Global scope. If you try to access a Private variable, PowerShell will throw an error message: Cannot access the variable '$myPrivateVariable' because it is a private variable.

Error message when trying to access a Private variable

Another useful variable property is Options. Five valid values exist for this property: AllScope, Private, Constant, ReadOnly, and None. None is the default configuration.

I already discussed AllScope in my post about variable scopes. A variable where this option is set is available in all new child scopes. Private does the opposite; the variable will only be available on the current (Local) scope. This has the same effect as if you declare the variable as Private when you initialize it:

Different ways to set a variable as Private

These two commands accomplish the same thing. If you run one after the other, PowerShell will complain that you keep repeating yourself.

The Options properties Constant and ReadOnly have a similar effect: you can protect a variable from being overwritten with a new value. Protecting your variable with Constant is just a bit more reliable. You can delete a ReadOnly variable, and you may also override it by using the -Force parameter. A Constant variable cannot be changed at all, and you can only destroy it by ending your PowerShell session.

Note that you cannot change the Options property of a ReadOnly variable. You first have to delete and then re-create it. The following examples demonstrate that Constant variables are truly constant:

Trying to change and delete a Constant variable

You are probably wondering why you would want to use ReadOnly and Constant variables if it causes so much trouble to change them. In programming languages that have to be compiled, the declaration of constants allows for compilation optimization; this is of no help in PowerShell because it is an interpreted language.

However, you can see ReadOnly and Constant variables as additional variable types. Type safety improves the reliability of your scripts. If you know that the value of a variable should not be changed in the entire script, you can set it to ReadOnly; if you are sure that a variable must not be changed, you can you set it to Constant. It is often better to allow a script to terminate with an error message rather than move ahead with the wrong variable values. Furthermore, if you work on a large project with other PowerShell developers, clarifying how a variable should be treated will improve the readability of your code.

ReadOnly and Constant variables can also be helpful when you are working at a PowerShell prompt. For instance, if you defined variables in your profile to save yourself from typing complex arguments, you might want to prevent Global variables in a script from accidentally overriding your variables.

Variable attributes allow you to restrict the value of a variable. In a way, this enables you to create your own variable types. For example, you can restrict the range of an integer variable or limit the length of a string. The purpose is to make your script more reliable. This feature also allows you to validate user inputs. Of course, you can achieve the same results by validating the contents of a variable in your script. However, if you store the restrictions in the variable’s Attributes property, you ensure that its value will always meet your requirements.

So, for instance, the complete type name for configuring a number range is System.Management.Automation.ValidateRangeAttribute. In the following example, we restrict the values of an integer to the range 1-9:

Restricting a number to the range 1-9

In the above example, I entered the number 10, and PowerShell answered with an error message because the number is not in the specified range. If you want to prevent the error message, this little script shows how:

This script asks for user input and only accepts “yes” or “no” as an answer. If you enter anything else, the script will ask again. Admittedly, easier ways exist to accomplish this task, but I think you now have an idea of how you can use variable attributes. 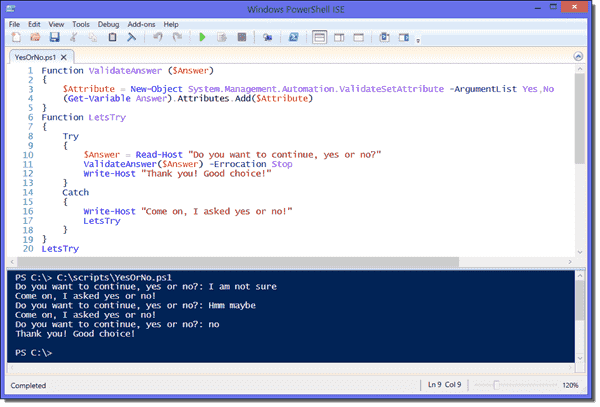 This concludes my variable series. I didn’t discuss everything that can be said about PowerShell variables, but I think you now know the most features.