Timothy Warner  Thu, Jun 16 2011Wed, Mar 11 2015  powershell  4
In part 1 of this PowerShell tutorial for Windows admins you will learn about the cmdlet and pipeline concepts.

Microsoft Windows PowerShell was conceived as the next-generation replacement for the old and reliable cmd.exe command shell environment. What’s especially cool about PowerShell is that it has a lot to offer both Windows systems administrators as well as .NET solution developers.

To that end, I thought in this piece that I would attempt to help at least those in the systems administrator camp by explaining in plain English the primary PowerShell vocabulary terms. Let’s get started, shall we?

The cmdlet (pronounced COMMAND-let) is the basic building block of Windows PowerShell. When you install PowerShell 2.0 on a Windows system, you receive by default the core library of PowerShell cmdlets. As you probably know, Microsoft has invested heavily in PowerShell technology. Therefore, most Microsoft server technologies ship with their own custom PowerShell modules. Examples of first-party extension modules include Active Directory, SQL Server 2008, SharePoint Server 2010 and Exchange Server 2010.

Regardless of their source, all cmdlets are designed (1) using a consistent usage rubric; and (2) to accomplish a single, specific task. Take a look at the following exhibit, and we’ll break down the constituent parts and pieces of a typical PowerShell command:

The PowerShell cmdlet and its components

Cmdlets always consist of a verb-noun compound phrase separated by a hyphen; this is done by design in order to make remembering PowerShell commands easy and intuitive. In the previous example, Get-ChildItem, the Get (verb) part of the command directs the action; in this case, to retrieve data. The ChildItem (noun) part of the command provides the focus for the verb; in the example, to obtain a directory listing.

NOTE: Cmdlets are completely case IN-sensitive. Therefore, the statements get-childitem, Get-ChildItem, and GET-CHILDITEM are all equivalent in practice.

You will discover that PowerShell uses many of the same verbs regardless of the origin or context of a particular PowerShell cmdlet:

Moreover, not all cmdlets require an argument to accompany a parameter; these are called positional parameters because all that is required is the name of the cmdlet and the name of the parameter issued the proper order.

You can instruct PowerShell to list the full syntax of any available cmdlet by typing get-help cmdletname from the PowerShell prompt.

In case you haven’t picked this up from context, an argument is nothing more than a value that is passed to a parameter. In the current example, the Get-ChildItem cmdlet, which functions identically to the old DOS dir command, requires that you pass an argument (namely, the filespec for which you need a directory listing) to the cmdlet. In this case, -path is a positional parameter and can safely be omitted; thus, the statements Get-ChildItem –path C:\Tools and Get-ChildItem C:\Tools are synonymous.

One of the most powerful aspects of Windows PowerShell (besides the fact that its command set has its roots in the all-pervasive .NET Framework, that is), is what is called the pipeline. Those of you who are already masters of *NIX shell scripting are already familiar with the pipeline, but for us Windows administrators, give a listen.

In PowerShell, piping refers to the process of passing the results of one cmdlet as an argument into a second cmdlet. Therefore, the pipeline enables us to create compound cmdlet sequences that perform multiple tasks in a single operation. Take a look at the following example: 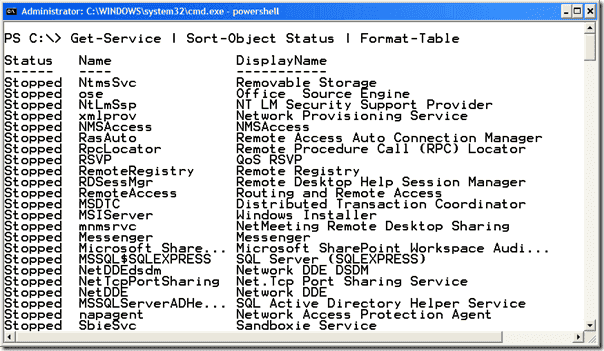 In the previous example, we “chain” together three PowerShell cmdlets by using the pipe (|) character. The net result in this case is that we receive a nifty, formatted list of our Windows services, organized by their run status. Pretty cool, eh?

If there are other PowerShell-related topics that on which you would like to see coverage here at 4sysops, then please leave your request in the comments. Thanks!