Mike Kanakos  Thu, Apr 19 2018Fri, Apr 20 2018  powershell  4
Last week I was fortunate to have attended the PowerShell Summit in Bellevue, Washington on behalf of my employer. The summit, organized and run by the PowerShell.org website, was a combination of keynote speeches by industry leaders followed by three days of in-depth presentations on all things PowerShell.

Being that this was my first time attending, I honestly wasn't sure what to expect. The conference targets sysops and devops staff and consists of "400-level" content. In other words, it's very deep content targeted toward a specific group of hardcore PowerShell users. I was lucky enough to attend from the pre-event welcome night on Sunday evening to the final sessions on Thursday afternoon. 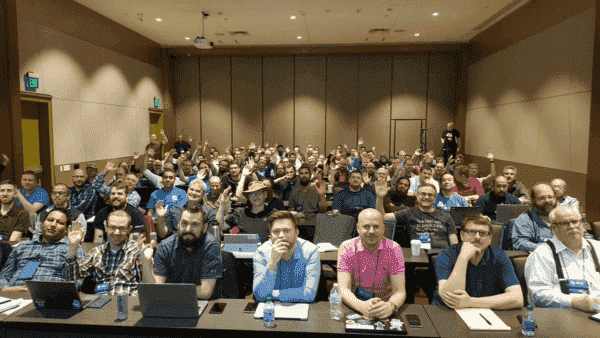 I want to point out something I started to allude to earlier: this was and is not a Microsoft-led event. It is an event a nonprofit organization put on. As I was able to see firsthand, it is passionate about advancing the cause for PowerShell and all things related to its usage. The charismatic Don Jones leads Powershell.org. Most know him from his very successful series of books on PowerShell and other scripting languages previously. You don't need to spend long with Mr. Jones to see how much he cares about the industry and gives people a chance to be successful. He is generous in a way that most people would not expect and is amazingly graceful and approachable.

The one thing you notice about this conference that is different from any other I have been to in the past is the level of access to the industry's biggest names. The hardest part you have to deal with at this show is getting the courage to walk over to the people we have read about on this site and others. Once you take that first chance though, you are shocked at how willing everyone in attendance is to talk about any topic that comes to mind, almost as if you have been here many times before.

I personally had put myself out on a limb for this conference. I convinced my employer of the importance of attending, but since I work in North Carolina, and the show was on the West Coast, the cost dictated that I had to go solo. Now I can tell you I previously had no connections I knew of that would be attending, and I knew of many of the attendees in name only. To put it simply, I was flying solo and had no idea if I would have anyone to hang out with at this conference.

Well, I must tell you that I probably made it about five minutes at the welcome event before two of the show's organizers came over and struck a conversation with me. I was talking with these guys like we were old friends, and they reassured me that I would fit right in. After that interaction, I spent the better part of the evening with a bunch of folks from different parts of the industry just talking about all things PowerShell and what our personal opinions were and what we had hoped to get out of the show.

Day one of the conference started like many others: keynote speeches. The day started with a kickoff by Don Jones. Don discussed the status of the community at large, predictions of where things are going, and what PowerShell.org has been able to accomplish as an organization. Did you know that Powershell.org now provides scholarships to teenagers so they can get their start in the industry with formal training with a reputable national training organization? I learned of this during Don's speech, and it was amazing to see the community giving back instead of pontificating about technology and what the next big thing is. Don went on to recognize what he calls "PowerShell heroes" who are people in the community recognized for their outstanding efforts to help the community at large. Recipients of this first-time award were community heavyweights like our own Adam Bertram, Warren Frame (ramblingcookiemonster), Kevin Marquette, Lee Dailey (reddit), Missy Januzsko and Jeffrey Snover himself. 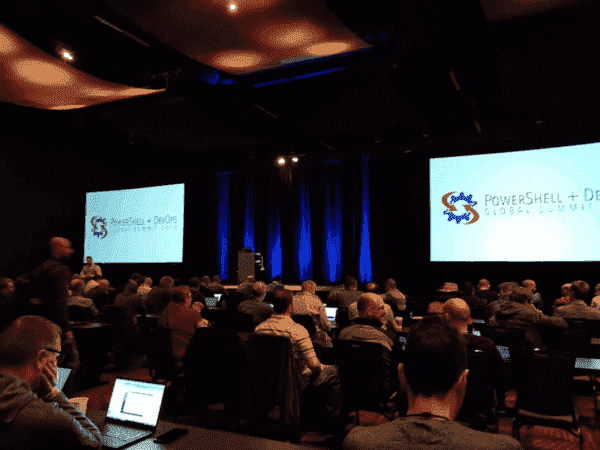 Next up was none other than Jeffrey Snover who spoke eloquently about all things PowerShell, Microsoft, and Azure. The takeaway from his speech was that Microsoft is all-in on PowerShell and Azure/Azure Stack. The big announcement was that Windows PowerShell 5.1 is "considered feature complete" and Microsoft will do no more development for it. Instead, the future is PowerShell 6, which runs on .NET standard versus .NET on WMI for Windows on PowerShell 5.x. This means PowerShell core (v6) is open source now, and we can install it on Windows, Linux, and Mac systems.

Microsoft will call Windows PowerShell just Powershell now. As Mr. Snover said, "it will be able to run on any client, manage any server or service running in any cloud or on-premises on any hypervisor, any type of storage and any networking." He specifically mentioned that Powershell 5.x is "complete" and they will develop no new features for it except possibly security/bug fixes but nothing else. He reassured the crowd that PowerShell 5.x isn't going anywhere, and they will support it for a very long time, which he likened to cmd.exe. His example was that Microsoft hasn't added a single feature to cmd.exe in over 20 years but still support and still include it in every OS. They will treat Windows PowerShell in much the same way.

Also of note Mr. Snover's revelation that PowerShell v6 will have a module available that will allow v6 to remotely access the modules that run in the 5.x client not yet available for the v6 client. What this means is you can load the cmdlets currently only available in 5.x (i.e., the Active Directory module) in the v6 client. You can also run them via a "remote connection to the 5.x client" without any issues or loss of functionality as long as you've installed both v6 and v5 clients on a machine. That's pretty cool!

We will only need this until the makers of PowerShell modules can refactor their software for the new v6 platform and the .NET standard. It relieves the PowerShell team from having to try to support a bunch of legacy code. Lastly, Jeffrey Snover mentioned that nearly 48% of all the code in PowerShell v6 came from the open-source community and that it will continue to be open-source and anyone can contribute their code to the project via GitHub.

Following the keynote speeches, the conference went on to the technical sessions, which, for me, were fantastic. I am going to skip the details of those sessions instead to go back to the best part of the conference: the people.

The openness of all the conference attendees really impressed me. They shared information regardless of everyone's skill set and experience. I personally got to meet and chat one on one with Don Jones, Jeffrey Snover, Adam Bertram, Jeffrey Hicks, Richard Siddaway, Bruce Payette, Mark Minasi, Dan Franciscus, Warren Frame, Lee Holmes, Ashley McGlone, Kevin Marquette, Jason Helmick, Mike F. Robbins, and many others. When I say one on one, I mean like, hey let's have a beer and bullshit about whatever comes to mind!

The number of tips and pointers I learned from this conference was really just mind-blowing, but more importantly, I have made so many connections in the industry with people I have read about for years. Now I am on a first-name basis with many of these individuals, and I have a few collaboration projects in the works with these great people. I could never have imagined I would have this level of access to these people, and honestly as I said earlier, it really was the best part of the conference.

Powershell.org is going to have much more in-depth coverage of the conference and recording of the sessions will be on YouTube in about a month. I'll sum up my experience like this: I had unprecedented access to all the biggest and brightest names in our industry as well as being able to attend expert-led tech discussions on the many aspects of PowerShell in the wild. The conference does an excellent job at getting people to participate. And for that reason alone I highly recommend you consider attending this conference next year. Even if you are a bit of an introvert, the content of this conference is really well done, and you will come away with a bunch of new ideas. More importantly, you'll have a lot of desire to build new tools.

I know this article is a little long, but there was so much great stuff to share. I still feel as though I didn't even cover most of what I saw. I probably could do another post just on the session deep-dives I attended. If you have any questions at all about the conference or the conference materials, please feel free to reach out me via the comments section here or on twitter (@MikeKanakos) or over at my blog (www.networkadm.in).

And also mark your calendars for next year's conference: April 29th–May 2nd! I hope to see you there.