Brandon Olin  Wed, May 23 2018Wed, May 23 2018  powershell, powershell beginner  4
With the Set-StrictMode cmdlet you can turn PowerShell’s Strict Mode on, which ensures that you follow best practices in your script. Here, you’ll learn the differences between Strict Mode versions 1.0 and 2.0.
Contents

By default, PowerShell is pretty lenient with certain programming rules that are considered bad practice. This can be both a blessing and a curse: a blessing in that it allows some flexibility when developing a script or learning PowerShell for the first time, but a curse in that certain classes of bugs and poor design choices can creep into your code and make troubleshooting a nightmare. Leaning how and why to use Strict Mode will help you level-up your PowerShell development skills and stamp out those pesky bugs.

So, what is PowerShell’s Strict Mode? Essentially, Strict Mode disables a few programming rules that PowerShell normally lets us use that go against best practices. Coding with these best practices in mind can help prevent bugs in your script at the cost of a little flexibility, especially during development. When Strict Mode is enabled, violating these rules will produce terminating errors in our scripts. Using the cmdlet Set-StrictMode, Strict Mode can be set to the following:

This is a very simple cmdlet as far as parameters go. We only have two parameters to work with, Off and Version.

When Strict Mode is set to Off (the default state), PowerShell operates with the most lenience and flexibility.

Setting Strict Mode to Version 1.0 will prohibit you from referencing variables that have not been initialized.

Strict Mode to Version 2.0 will also prohibit you from referencing initialized variables, in addition to prohibiting references to non-existent properties on objects, function calls using the syntax for calling methods, and variables without names.

When Strict Mode is set to Version Latest, it’ll use the strictest version available. This is currently Version 2.0, but if a newer version is added to PowerShell in the future, this setting would automatically use that newer version instead of Version 2.0.

When Strict Mode is enabled, it affects the current scope, and any child scopes. This means that if a PowerShell script or module turns on Strict Mode, it won’t affect the global scope, nor will it break other scripts or modules that aren’t children of the scope where it was set.

Now let’s dive a little deeper into what these rules mean, and take a look at some examples.

You can enable Strict Mode version 1.0 by running:

Version 1.0 prohibits referencing uninitialized variables. In practice, this looks like: 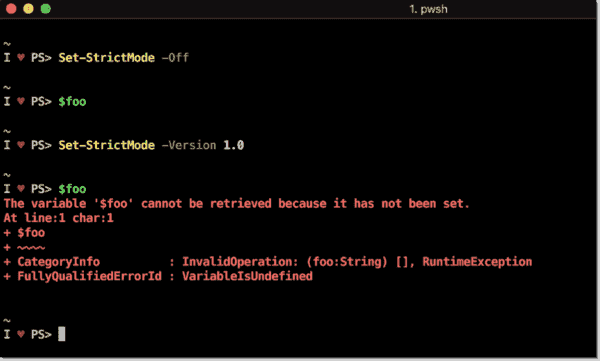 You can see that with Strict Mode turned off, PowerShell has no problem with us referencing a non-existent variable, but will pitch a fit when Strict Mode is set to Version 1.0.

You can enable Strict Mode version 2.0 by running:

On top of what Version 1.0 disables, Version 2.0 also prohibits us from referencing non-existent properties on objects, calling functions using the syntax for calling methods, and using variables without names.

I’d argue that referencing uninitialized variables and non-existent properties on objects are much more common than the latter two rules.

Referencing non-existent properties on objects is a common bug you’ll encounter when developing PowerShell scripts or modules, and will lead to a fair amount of hair pulling. Since everything in PowerShell is an object, we tend to make many references to properties of those objects, meaning typos are inevitable. Setting Strict Mode to Version 2.0 will cause them to produce a terminating error rather than nothing at all: 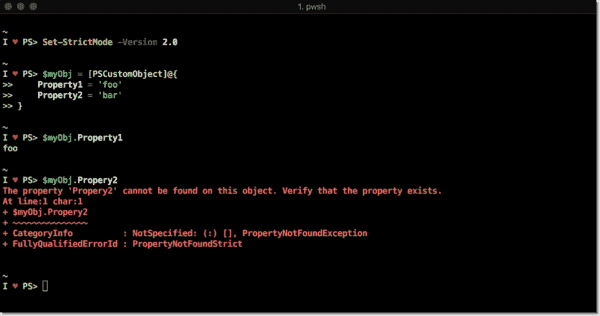 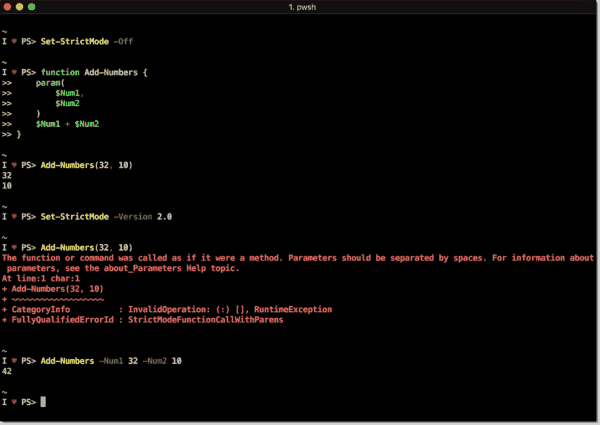 Calling a function like a method in strict mode version 2.0

Without version 2.0 Strict Mode enabled, PowerShell will treat (32,10) as an array, and pass to the first parameter (Num1). Num2 will not have a value so nothing will be added. I personally have not seen this syntax used in the wild, but it is certainly a possibility, and a bad practice nonetheless.

As demonstrated in these examples, using PowerShell’s Strict Mode can help eliminate several potential sources of bugs in your code. When developing a new script or module, it’s a good idea to put Set-StrictMode right at the top to help nudge you toward using the best practices and save you some troubleshooting and stress down the road.