Baki Onur Okutucu  Fri, Dec 8 2017Sun, Mar 25 2018  azure, cloud computing, powershell scripts  4
Creating a new snapshot using an existing disk of an Azure virtual machine (VM) requires three steps. First we have to create a snapshot of a VM disk, next we create a managed disk using this snapshot, and then we can create the VM using this managed disk. At the end of the post you will find a PowerShell script that lets you automate the task.

Using managed disks with VMs has a number of advantages such as capabilities of automatic storage service encryption, role-based account control features, availability set support, and so on.

You can select managed disks during a new VM deployment. 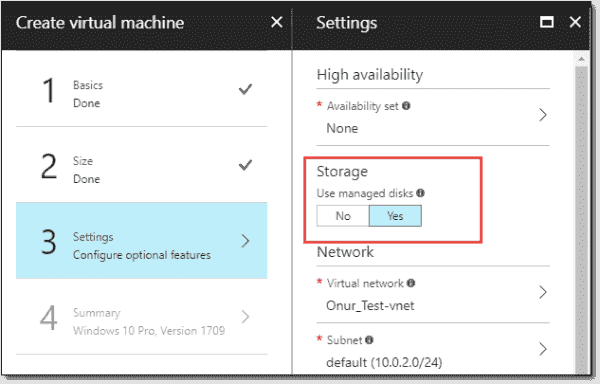 Managed disk as an option during VM deployments

After creating a VM with a managed disk, you can then find disks and manage them separately in the "Disks" section in Azure.

Manage disks in the Disks section in Azure

We will use one of the disks shown above to create a new snapshot. A VM named Windows10 uses this disk and displays it as "Owner VM."

So what we need to do first is specify the VM details with which we will create a new snapshot using the existing managed disk. This operation basically creates a new copy of an existing VM disk, which could be either an OSDisk or a DataDisk.

After creating a new snapshot named "OnurSnapshot1" using the script block above, it should appear in the Azure "Snapshots" with the details such as source disk, creation time, and disk size.

Now we have a new disk ready to attach to a new VM we will deploy. 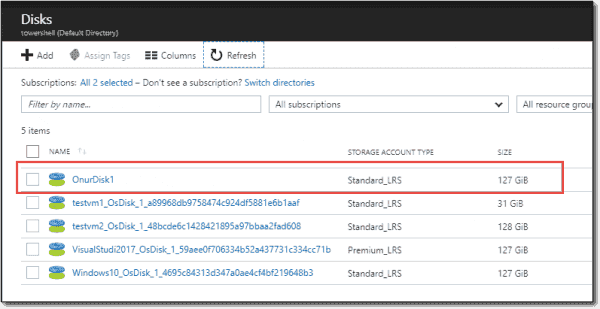 A new disk created from a snapshot

After completing the deployment, we can now see the managed disk attached to the VM.

Disk information for a new VM

Below is the entire script for creating a new Azure VM based on a disk snapshot: