Michael Pietroforte  Tue, Jun 30 2015Sat, Mar 17 2018  powershell, powershell beginner  6
PowerShell Invoke-Command supports three different ways to run commands and scripts in remote sessions. You can use the -InDisconnectedSession parameter, the -AsJob parameter, or the Start-Job cmdlet. I will discuss these three options and explain the differences.

The example at the end of my previous post illustrated how you can receive the results from a task running in a remote computer from an interactive session. If you want to read the results in a script, you could do it like this:

Adding the -ComputerName parameter has the same effect as using -OutTarget Job—that is, Receive-PSSession returns a job object instead of passing the results to the host application. It is interesting to note that the returned job object is not serialized. In my post about Invoke-Command, I mentioned that that the cmdlet returns only static objects that lack all interesting methods. This does not apply to Receive-PSSession.

The next example demonstrates what consequences this can have (be careful because your host might hang): 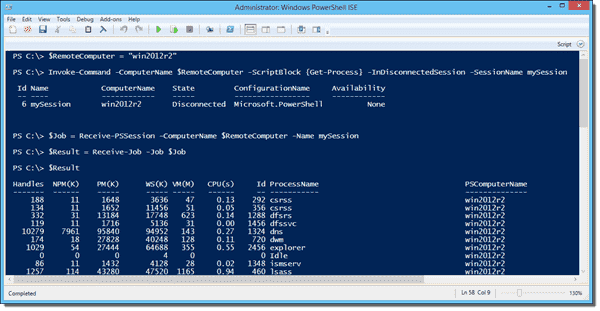 If you are testing in a virtual environment, you will notice that your virtual NIC will suddenly blink like wild while the output of the remote job is crawling over your screen. The CPU load on your test machine should also be noticeable. Thus, be careful before you load job objects that are connected to remote sessions into your current session.

Let’s have a look at the second method I mentioned in the beginning. The -AsJob parameter of Invoke-Command works a little differently from -InDisconnectedSession:

In contrast to the method with -InDisconnectedSession, the job object is created in your current session right from the beginning. Thus, you can work with it like a normal background job. But you also have to keep in mind that you are dealing with a remote job. Just as with the -InDisconnectedSession parameter, the remote machine will send all output of your commands to the job object in your current session. 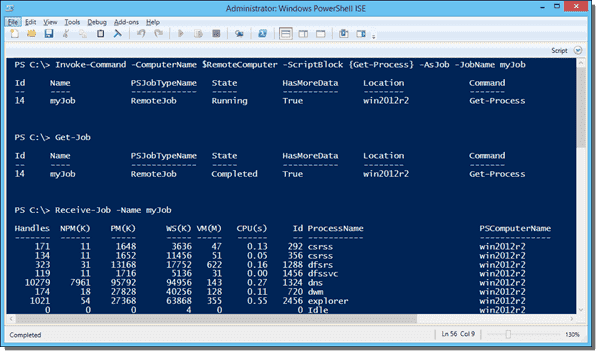 Executing a remote job with Start-Job

The -Keep parameter in the example ensures that the job result will stay on the remote machine after we collect it. This allows you to read the result a second time or from another machine.

The method with the -InDisconnectedSession parameter is different in that, whenever you collect your job result with Receive-PSSession, the output data is always removed from the remote session. However, you could keep the results in a local job object.

Another difference is that you need Invoke-Command to get the result, which always returns a serialized object. Thus, the -InDisconnectedSession method gives you more flexibility because it allows you to transfer a full-blown job object with all its methods to your current session. However, as demonstrated above, this can cause performance issues.

The method with Start-Job and the method with the -InDisconnectedSession parameter have one thing in common: you can easily access the job results from another machine where you launched the job.

Because the -AsJob parameter creates the job object in your local session, you can only access the job from the computer where you launched the job. This can also be an advantage if security is an issue. You should also take into account that, if you close your PowerShell console, the job is destroyed because its object lives in the current session. This won’t happen with the other two methods because their job objects live in PSSessions on the remote machine.

The table below summarizes the differences between the three methods. Note that “Start-Job” refers to the method in combination with Invoke-Command.

Please let me know if I missed a difference.

Leave a reply to Renaud Click here to cancel the reply