In computer programming, operators are symbols that are used to create expressions. Going further, an expression is an instruction that uses operators and data in order to produce a result. We can use conditional and logical operators in Windows PowerShell to (among other things) filter the result of an expression. Specifically, this translates into reducing the output of a PowerShell cmdlet to a more manageable amount.

For instance, consider the following expression:

As you know, the Get-Process cmdlet is used to retrieve a list of processes that are running on a local or remote computer. However, returning a list of all processes during a troubleshooting operation makes it much more difficult to see the specific information we need.

Thus, we can combine (a) the PowerShell pipeline; (b) the Where-Object cmdlet; and (c) comparison operators to filter cmdlet results in much the same way that the WHERE clause filters rows in Structured Query Language (SQL). To wit: 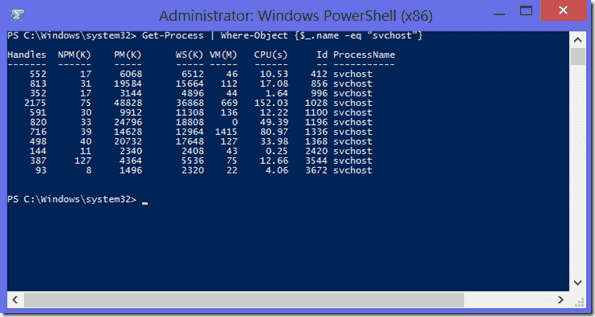 Example with the PowerShell operator -eq

Let’s break down each component of the preceding syntax:

How can we use comparison operators and the Where-Object cmdlet to see only those processes with a CPU utilization of over 20 percent? Try this: 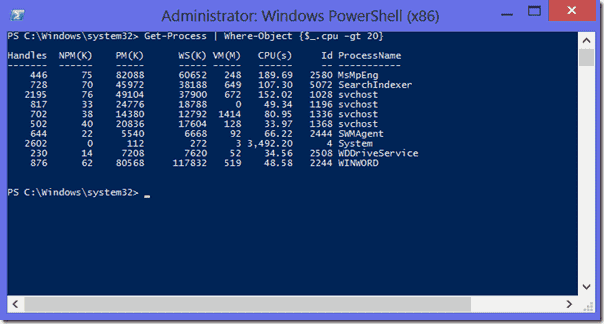 Example with the PowerShell operator -gt

By the way, you can get a list of all properties and methods (actions that an object can perform) of a cmdlet’s output by using the following syntax:

Variables in Windows PowerShell start with a dollar sign ($). First we need to pack the results of Get-Process into a variable. We can then pipe the contents of the variable into the Get-Members cmdlet. I show you the results of these statements on my computer in Figure 1.

In the previous code, we want to see all processes who have handle counts of less than or equal to 200, and a name that begins with “S.” Here is the full list of logical operators that are supported by PowerShell