Hey, everyone! I’m sorry that I’ve been away from 4sysops for so long. Where did we leave off in this mini-series on Windows PowerShell Desired State Configuration (DSC)? First of all, if you haven’t already done so, make sure to go back and read Parts 1 and 2:

In my lab environment, I have two Windows Server 2012 R2 computers:

Between writing Part 2 and today’s post, I added a local configuration manager (LCM) section to our InstallGoogleChrome.ps1 configuration file. Here, take a look at my entire script:

You’ll observe in the LocalConfigurationManager block that I lowered the value for ConfigurationModeFrequencyMins so I can test DSC’s autocorrection without having to wait…and wait…and wait some more. Of course, in a production environment, you’ll want to experiment to find a balance between compliance and performance.

When I ran the configuration script, I found two MOF files in the C:\InstallGoogleChrome folder:

We use the Start-DSCConfiguration cmdlet to initiate a DSC configuration process. Watch this:

The –Wait and –Verbose options are useful when we’re troubleshooting DSC and/or we want to see everything that DSC does during the configuration process. Be mindful of –Wait, though, because it can tie up your PowerShell session for a long time depending upon your DSC resource load.

Now, let’s switch over to adfs1, our target node, and see what happened. The following screenshot is boring until we remember that DSC silently installed Chrome and is enforcing its configuration! 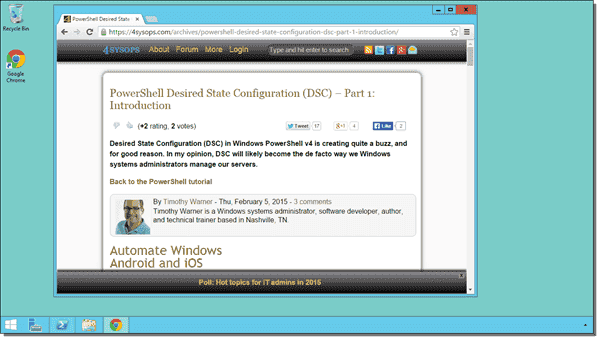 With DSC, we installed and monitored Google Chrome installation with no need for System Center.

Recall in our DSC configuration script that I added a client meta-config block that included the following two statements:

The ConfigurationModeFrequencyMins parameter defines how long the client waits, in minutes, before the LCM verifies that it is in the desired state.

We can use Test-DSCConfiguration on our admin server to remotely check compliance of adfs1. Note that we need to build a Common Information Model (CIM) session with the remote target before we can run the cmdlet:

I’ll now pretend that I’m a grumpy systems administrator who personally feels that Chrome doesn’t belong on a member server. Let’s uninstall Chrome by using the Programs and Features Control Panel, as shown in the following image: 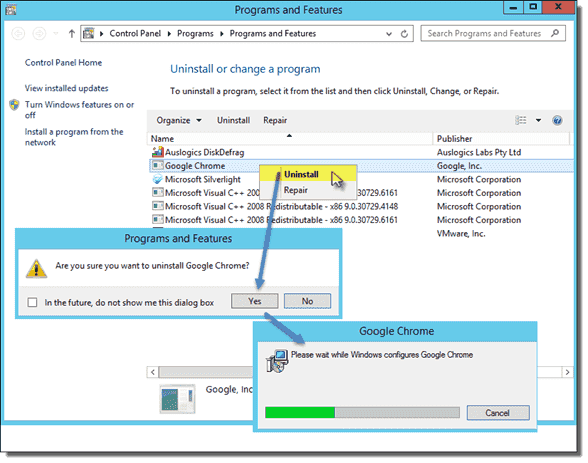 Uh oh! We have potential configuration drift! Not to worry, however—within five minutes, my adfs1 box silently brought itself back into compliance: 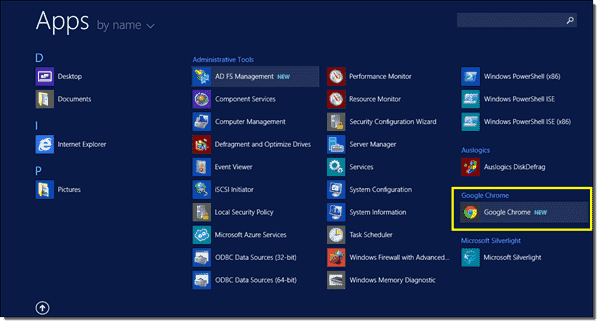 Editing or removing an existing configuration ^

Let’s say that we wanted to make the following configuration changes on adfs1:

To accomplish these goals, we need to edit our configuration script for adfs1. Remember that, in Windows PowerShell DSC, each node can have only one configuration. Right now, we have InstallGoogleChrome.ps1 that targets adfs1; so, for convenience, we’ll edit that one.

After I ran the script and initiated the configuration, I was a bit taken aback by the results shown in the following screenshot: 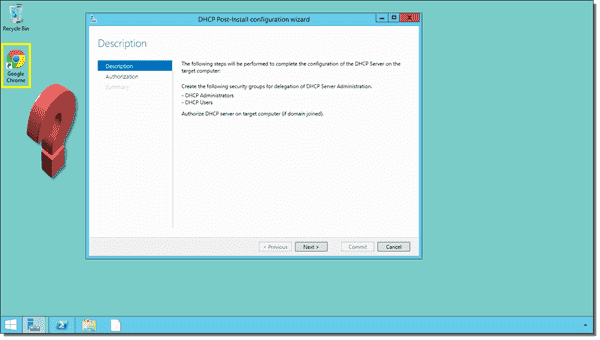 The presence of the DCHP Post-Install Configuration Wizard is a welcome sight and verifies that DSC installed the server role correctly. But what about the Google Chrome icon on the Windows Desktop? Why didn’t removing any reference to the Chrome DSC resource in our configuration script implicitly remove the software from our target node?

You need to understand DSC makes no assumptions. In other words, you have to explicitly “tell” DSC what to do with configured resources in your source script. So in this case, we could manually remove Chrome from adfs1 and take comfort that DSC won't reinstall because the config script doesn't reference Chrome.

A more formal way to go would be to keep the Chrome resource in the script, but use the following statement to ensure its removal:

In the fourth installment of this Desired State Configuration (DSC) series, we’ll see how to set up a DSC pull server. If you’re thinking about this stuff at depth, I’m sure you wondered “How can I automate DSC automation?”

So actually, what I’ll do next, in addition to covering DSC pull server, is show you how to target multiple nodes with your DSC configuration scripts. Sound good? We’ll see you then.