PowerShell Deployment Toolkit with a GUI

Paul Schnackenburg  Mon, Jul 14 2014Mon, Jul 14 2014  deployment, powershell, system center  2
Almost exactly a year ago, we looked at PowerShell Deployment Toolkit (PDT), which makes the huge task of installing the entire System Center 2012/2012 R2 (SC) suite easier. But there was only one problem: if you wanted to customize parts of the installation, you had to edit XML files by hand. This isn’t optimal. Two German geeks working at Elanity (Benedict Berger and Kamil Kosek) have created a GUI experience for working with PDT.
Contents

The whole point of these two free products is to speed up the deployment of System Center, particularly for lab and training environments and Proof of Concept installations. 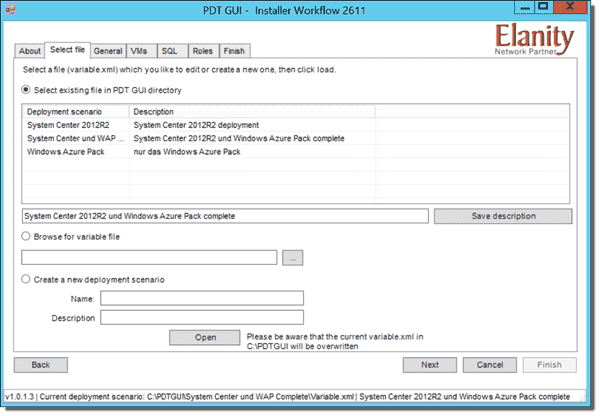 The first step in the PDT GUI is to select which variable.xml you’d like to customize.

Once you’ve unpacked the PDT GUI, right-click the PDT-GUI.Export file and select Run with PowerShell. If your PS execution policy needs to be changed to “remote signed”, you’ll be asked accordingly. Note that if you haven’t downloaded PDT (or put it in another folder), the script will do it for you.

The kit comes with a few pre-prepared variable.xml files (the key to any PDT deployment): one for System Center 2012 R2, one with System Center and Windows Azure Pack (WAP), and one for WAP only. You’ll need to pick one to access the rest of the functionality of the PDT GUI.

As you step through the different screens (sort of a wizard except that clicking Next only takes you to the next major tab and skips sub tabs), you fill in the required information. All the information you enter is saved in the variable.xml file, starting with product keys and paths on the General tab, followed by settings for each of the VMs on the VM tab. You can control individual settings for the database instances on the SQL tab as well as define which SC roles to install. 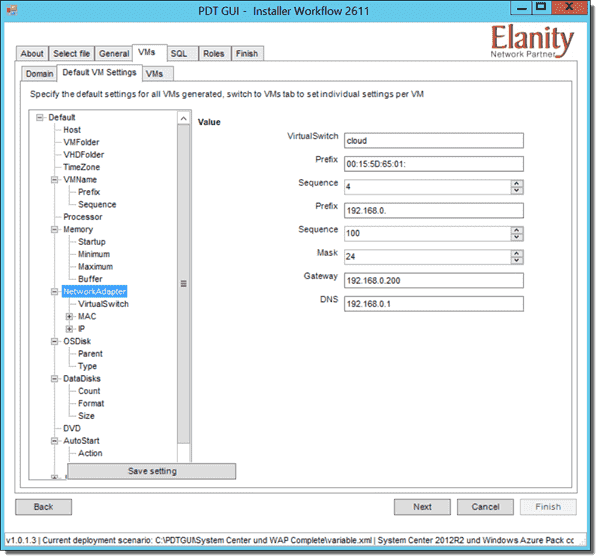 First, configure the general settings you want for all VMs, and then change any settings for individual VMs. Don’t forget to click Save after each change!

On each tab, make sure you click Save before moving to the next tab; otherwise, your settings will NOT be recorded. On the Finish tab, you can run the download script (which downloads all prerequisite software except SC itself, which has to be done manually), run the VMCreator script that creates all the Hyper-V VMs, and run the validation part of the installer script to ensure that everything is in place for a successful deployment. Finally, you can, of course, run the installer itself.

Note that the PDT GUI doesn’t yet support some advanced scenarios that PDT itself allows, such as clustered SQL servers. 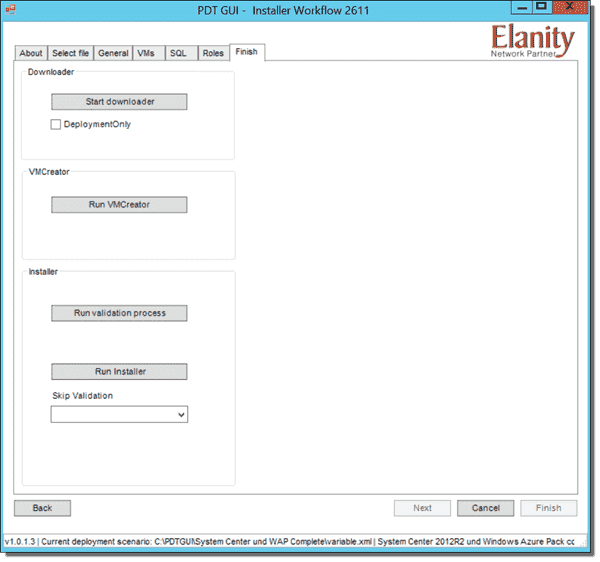 Wrapping up the customization and actually downloading the files, creating the VMs, and installing SC can all be started from the final page.

Since we looked at PDT itself last year, there have been some major advances. The main one for lab and training environments is that you can now create an AD forest/domain and set up domain controller(s); thus, a whole self-contained SC environment can be spun up in rather short order. Windows Azure Pack (WAP), Service Management Automation (SMA), and Service Provider Foundation (SPF) have also been added.

It needs to be mentioned that, in my experience, not everything happens perfectly the first time you run PDT. Several moving cogwheels need to be just right. However, once you’ve ironed out the kinks for your particular environment, there’s no doubt that PDT saves you many hours in an SC deployment. And now, with the GUI, you don’t even have to wrestle with XML files manually.