Paul Schnackenburg  Mon, Jul 1 2013Mon, Jul 1 2013  powershell, powershell scripts, system center  2
Interested in System Center 2012 but not really keen on setting up eight servers manually, downloading all the prerequisites, running the setup for each of the seven components in the suite and then configuring each individual component, followed by the integration necessary to get it working as one? If you’ve ever gone through a manual installation of all of System Center, starting with all the prerequisites and bothered to count it’s over 500 screens to click through.

The free PowerShell Deployment Toolkit (PDT) comes to the rescue. Designed to bring the installation time down from weeks to hours, it offers flexibility in picking which parts of the suite to install and even covering advanced options such as clustered System Center suite components and clustered SQL server for the backend. The 69 KB download contains five files:

It’s important to realize that PDT isn’t designed to replace the great software distribution features in Configuration Manager, nor the great capabilities unlocked by service templates in VMM but rather its designed to solve the chicken and egg problem: get System Center in place first so you can then take advantage of all these great features. It’s also great for setting up a lab environment or a Proof of Concept implementation.

The downloader will take its time, depending on the speed of your internet connection, it’ll also use winrar (make sure this is installed on your machine before running it) to unpack each installer, as well as slipstream relevant service packs into SQL server. On my system the 15 GB or so download was unpacked to just over 32 GB of files into the default folder of c:\temp.

PDT uses Task Scheduler to create a job on each remote system which is then triggered to run, neatly working around the issues associated with PSExec, remote PowerShell and other remote system execution tools. PDT can be run from a Hyper-V host, on which you have the VMs running, note that the VMCreator script doesn’t create highly available VMs in a cluster. You could also run the installer from a workstation that’ll you’re planning to use as a management station. Make sure however that you don’t run it from a VM (or physical machine) that’s actually part of the deployment as a reboot will cause the installation to fail.

For troubleshooting (and let’s face it, in a complex setup such as this everything won’t always go smoothly) PDT gathers the installation logs from each component on each server and stores them as a subfolder in your \temp folder. 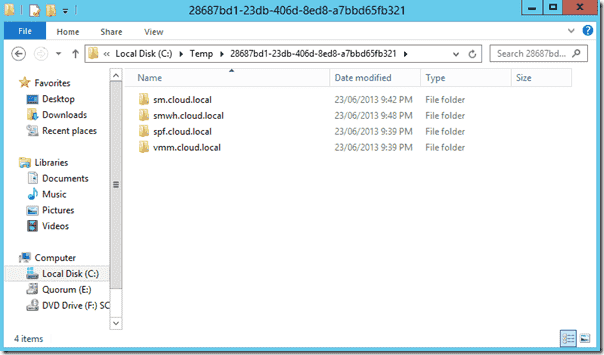 Some System Center installation logfiles are actually deleted in a normal installation, PDT helps out here as well by copying all logfiles to the installation server during the setup.

The bottleneck for a System Center installation is I/O, the faster your disk setup is, the faster the installation. If you’re going to run all the System Center VMs on a single host I recommend 32 GB of memory, 16 GB isn’t enough for all the VMs. Note that PDT isn’t foolproof and some customization might be needed, you can follow some people’s experiences here and here.

Overall the process of getting System Center installed as well as the components integrated is much improved with PDT and for anyone looking to get acquainted with System Center, needing to setup a lab or a study environment it’s invaluable. Of course PDT can also be used to setup System Center for production environments in a controlled fashion.