Michael Pietroforte  Thu, Apr 16 2015Sun, Apr 19 2015  powershell, powershell beginner  2
The CmdletBinding and the Parameter attribute turn a simple function into an advanced function, thereby adding features that are common in cmdlets. However, the question is whether you really need advanced functions in your PowerShell scripts.

Advanced functions were originally called script cmdlets because they allow you to script commands that behave essentially like compiled cmdlets. Their leaner counterparts are called simple, standard, or normal functions.

Cmdlets share a common set of features to make our work in an interactive environment consistent. For instance, cmdlets support common parameters such as -ErrorAction or -WhatIf, they prompt for confirmation if you are about to run a command with high impact, or they force you to pass mandatory parameters. These are all features that simple functions lack but that are available in advanced functions.

Two ways exist to create an advanced function: you can either add the CmdletBinding attribute or add the Parameter attribute. It is also possible to work with both attributes in the same function.

The purpose of the Parameter attribute is to specify certain features of the function’s parameters, such as making a parameter mandatory or defining its position in the command as is common in cmdlets.

You can use the CmdletBinding attribute to add basic cmdlet features, such as common parameters, to functions or to make certain methods available that allow you to change the behavior of the function. Let’s look at some examples.

The simplest advanced function I can think of looks like this:

Note that the Param keyword is required here even if you don’t define parameters in your function.

The easiest way to find out if a function is recognized as advanced is to check whether it supports common parameters. If you run the above function in PowerShell ISE and then type its name on the command prompt with a hyphen, as you see in the screenshot below, the PowerShell ISE auto completion feature presents you with a list of common parameters. 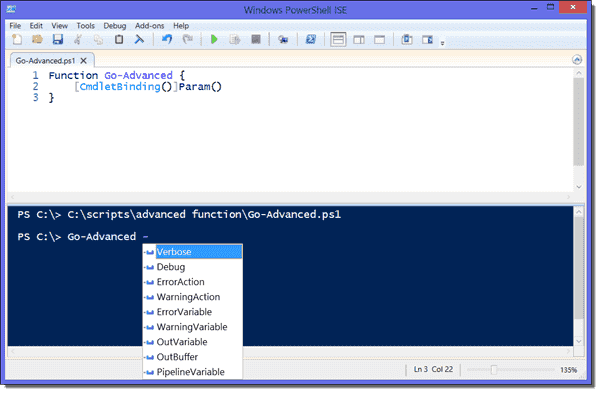 Creating an advanced function with the CmdletBinding attribute

Aside from demonstrating how an advanced function can be built, this function has no other purpose. Let’s look at an example where you can actually use one of those common parameters that PowerShell automatically added to our function. In the example below, we use the Write-Verbose cmdlet, which allows you to display a message if a function is called with the common parameter -Verbose.

The next function demonstrates the usage of the ShouldContinue method, which can be helpful if you want to work with confirmation requests. You can access this method through the automatic variable $PSCmdlet, which is only available in advanced functions. In addition, the CmdletBinding attribute has to set the SupportsShouldProcess parameter to $True. 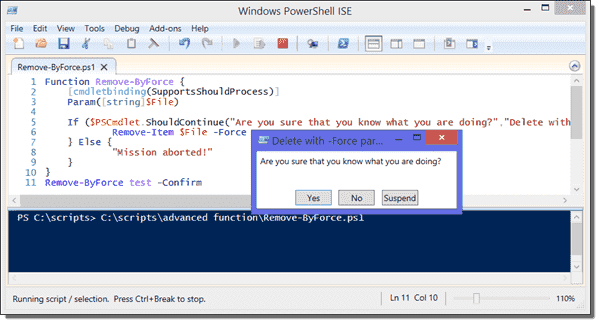 Working with the ShouldContinue method

As you can see in the screenshot, if you call the function with the -Confirm parameter, the ShouldContinue method produces a confirmation request. If the user clicks No, the message in the Else block will be displayed.

If you want the request to show up even without the use of the -Confirm parameter, you have to first set the $ConfirmPreference variable to “Low,” which makes PowerShell prompt for confirmation when running cmdlets with a low, medium, or high risk. 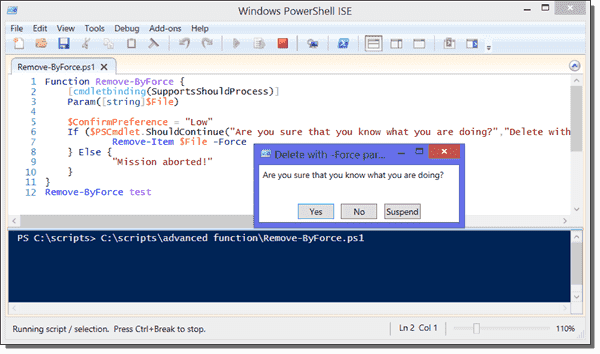 Quite a few other methods exist that allow you to build your functions with many features that are typical for cmdlets. 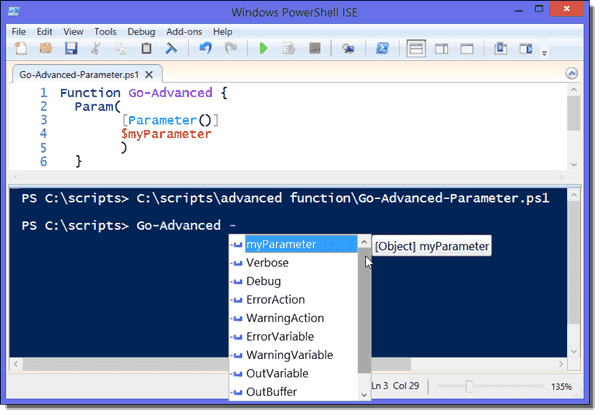 Creating an advanced function with the Parameter attribute 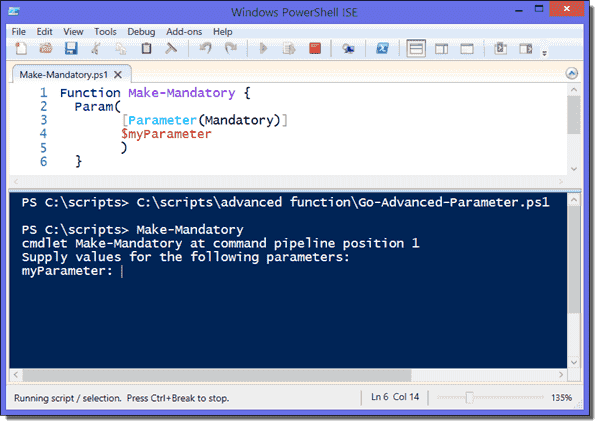 If you call a function without passing a value for a mandatory parameter, PowerShell will prompt you to supply the value.

To view the syntax of the function with its parameters set, you can use the Get-Help cmdlet. As you can see in the screenshot below, it displays the the syntax of each parameter set separately. 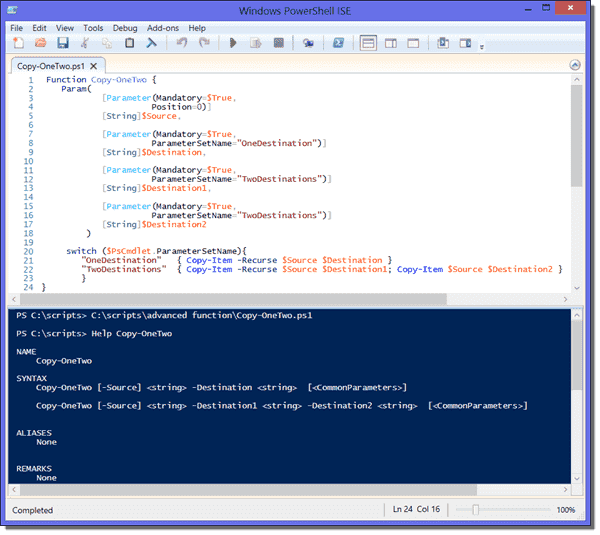 For more information about the available arguments of the Parameter attribute, please read Microsoft’s documentation.

In a way, the term “advanced function” is a bit misleading. Because there is only one keyword for creating functions (Function), there is actually only one type of function. The CmdletBinding and Parameter attributes just change the behavior of functions. But this also applies to other keywords, such as Process or the validation attributes (which don’t need advanced functions). Thus, if you really need an advanced function feature—say, mandatory parameters—you can use the Parameter attribute. But ask yourself if you really need mandatory parameters in a non-interactive environment.

You should also be aware that advanced functions lack some features of standard functions. For example, you can’t use the automatic variable $Args that allows you to pass an unknown number of values to a function. Advanced functions are also less forgiving when you pass a named parameter that wasn’t defined in the function.

What’s your view? Advanced or simple?

Leave a reply to PowerMe! (Rank: 3)
Click here to cancel the reply