Wolfgang Sommergut  Mon, Jul 27 2020Mon, Jul 27 2020  deployment, group policy  0
In environments where many documents, or long ones, are printed, you can avoid wait times by assigning several physical printers to a shared logical printer. The print server then automatically distributes the jobs to printers that are idle.

If there are several printers available for a location or department, but you share them as individual printers, users have to guess or go have a look if they want to send their job to a free device.

You can avoid this by letting the print server automatically distribute print jobs among printers. The prerequisite for pooling printers is that they use the same driver. Ideally, they should be of the same make and model. However, since PCL or postscript drivers can often be used for models from different manufacturers, it is also possible to combine heterogeneous printers in a pool, but with certain restrictions.

It also makes sense to place all printers in a pool in one place, or at least within proximity to one another, because the users do not know in advance on which device their job will be printed. Therefore, they would have to visit the different printer locations in order to find the documents.

The first step is to set up a new printer on the server via print management. In the printer's properties, go to the Ports tab and select the Enable printer pooling option. After that, you can select several connections. 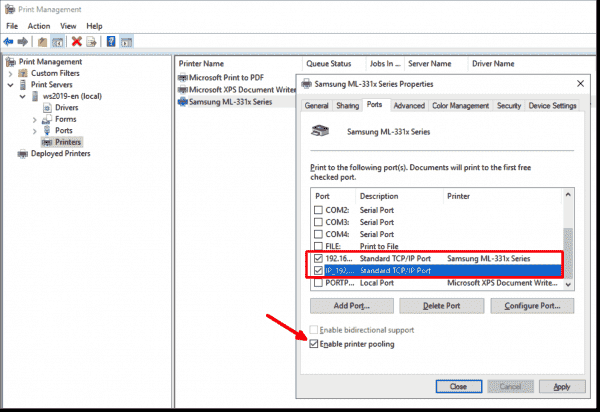 Now assign all printers to the pool by selecting the ports they are connected to. These can be either local or network ports.

Basically, you could also set up a logical printer with PowerShell and assign the desired ports to it with Add-Printer. However, there is no way to enable pooling there (apart from registry hacks or similar means). Therefore, print management is the tool of choice.

Not only is it possible to share multiple printers as one logical printer, but conversely, you can also add a physical printer to several pools at the same time. In this way, the same printers can be assigned to different user groups via separate pools.

You could use this feature to make the printers in a pool available to certain users with different priorities. In the printer's properties, go to the Advanced tab. Set the Priority setting to a value between 1 and 99. 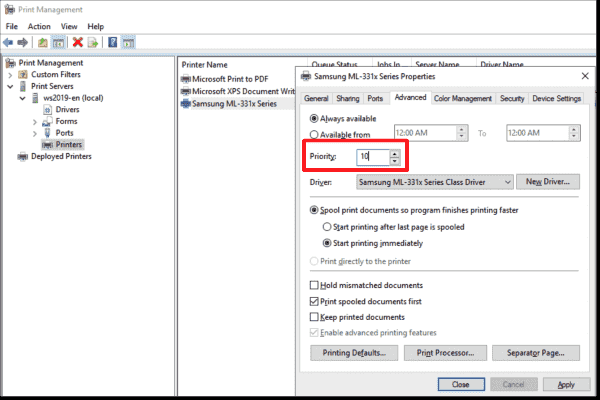 If you set the priority to a single pool, it has no effect. However, if you include a group of printers in several pools and assign each one a different priority, then the print server will give preference to jobs for pools with a higher value.

If you use a GPO to allocate a higher priority pool to a user group whose print jobs are considered urgent, then they will always have priority over print jobs that other groups send to lower priority pools with the same printers.