Poll results: When will your organization upgrade to Windows 10?

Home Blog Poll results: When will your organization upgrade to Windows 10?

Michael Pietroforte  Thu, Aug 13 2015Thu, Aug 13 2015  microsoft, windows 10  0
The poll results are quite amazing. Only 11 percent of voters who responded are thinking of skipping Windows 10. Of the remaining 89 percent who are planning to deploy Windows 10, a whopping 54 percent will upgrade to Windows 10 within one year.

At the time of this writing, 169 4sysops readers took part in our Windows 10 poll. Based on my experience with previous polls, the results should be statistically significant. I don’t expect a change of more than two or three percent. However, the willingness to upgrade to Windows 10 could change over time as more IT pros pick up experience with Microsoft’s new operating system. 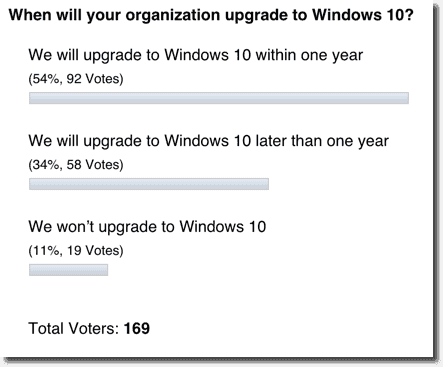 Another question is whether 4sysops readers have a different stance on the topic than the average IT pro does. I think blog readers are more forward-thinking than are admins who occasionally flick through a print magazine to inform themselves about the latest developments in their profession. And progressive IT pros are more likely to work for organizations that will keep their IT infrastructure up to date.

Nevertheless, the fact that about half of the networks could be running Windows 10 within one year is amazing. Honestly, this is hard to believe even if you consider that many businesses will try to save the upgrade costs. I wouldn’t rule out that some IT pros who voted for this option are a bit too optimistic.

IT pros are only people, and all the excitement about Windows 10 and the free upgrade won’t help much with the necessary preparations for an operating system upgrade. And no, we can’t infer from the “Gates law” that it will take ten years for everyone to have Windows 10. IT news sites around the planet report amazing numbers about the early Windows 10 adoption.

Microsoft claims 14 million installations within the first 24 hours. According to The Register, the market share of Windows 10 was 3.55 percent 11 days after its launch, which means that Windows 10 already surpassed Windows 8—and, by now, probably also Mac OS X. It is hard to tell if these numbers are correct. However, the euphoria about Windows 10 is obvious in all corners of the net.

Of course, some negative voices are heard. The most often-heard critiques tout privacy concerns. It is also unclear whether the new features are the main reason for these amazing adoption numbers or whether it is just the fact that the upgrade is free for a limited time.

Hence, we can’t infer that this current Windows 10 ecstasy can save the dwindling PC market in the long run. We won’t know if Windows 10 will really be a success story for Microsoft until we have the new PC sales numbers at the end of the year. Because of the free upgrade, Windows 10 probably won’t have much of an impact on Microsoft’s earnings anytime soon.

In the long run, much will depend on whether Microsoft succeeds in bringing Windows 10 to devices with different form factors because the PC as a device type will probably continue to lose market share. It is no wonder that, Continuum is one of Nadella’s favorite Windows 10 features. Imagine that you could really do typical desktop work, such as editing a large Excel sheet or designing with a CAD program, on a phone. In my view, Continuum is currently Microsoft’s only chance of once again becoming the dominant OS maker it was in the nineties.