Jörgen Nilsson  Wed, Aug 10 2016Sat, Aug 20 2016  desktop management, group policy, sccm, windows 10  65
Windows 10 1607 (Anniversary Update) provides new ways to manage the pinned apps on a user's Taskbar. In this post, I explain how you can deploy a Taskbar layout with PowerShell, Group Policy, and Configuration Manager and share the experiences I had with the new Taskbar feature during my tests.

The feature we used to deploy a customized Start menu in Windows 10 has been extended with the ability to manage pinned items on the Taskbar. There are some unsupported solutions for importing a Taskbar layout during OS deployment. However, now we can do it in a supported manner, and we can even add items using Group Policy after we create the user profile.

The Taskbar layout is configured in an .xml file either together with the Start menu layout or in a separate file. The .xml file can then be deployed using different tools according to which suits your organization best.

This sample file will give the following layout on the Taskbar:

The sample file below includes the layout configuration for the Start menu and the Taskbar as shown in the screenshot: 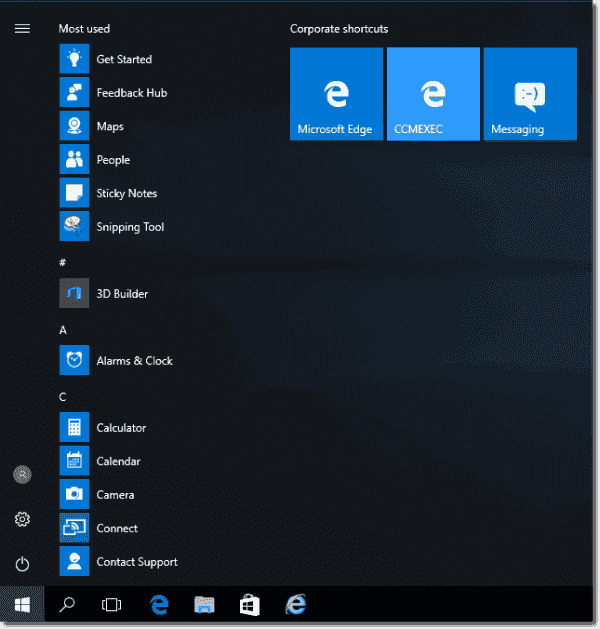 We have the option to either keep the default pinned apps (Edge, Store, and File Explorer) or delete them. If we delete them, we can add them back again using the same .xml file that we use to delete them. In my example, I have added the Messaging app and Internet Explorer to the Taskbar.

To remove the default pinned items, you have to replace <CustomTaskbarLayoutCollection> with

If we want to keep Edge and File Explorer and only remove the Store app, we can add both apps back to the .xml file by adding the following lines:

We then get a Start menu that looks like this:

How to find the AppUserModelID ^

To add a modern app, we need the AppUserModelID. To find the ID, you can add the app to the Start menu and then use PowerShell to export the Start menu layout with the Export-StartLayout cmdlet to an .xml file.

For instance, to get the AppUserModelID for the Camera app you can follow this procedure:

The easiest way to test if your XML file works as intended is to use the PowerShell cmdlet Import-StartLayout as a local administrator:

Then log on to the computer with a user account that has no profile on the machine, and the Taskbar modifications should be applied.

Of course, you can use PowerShell to deploy the Taskbar with a script, and you can also use the above command during OS deployment, such as with Configuration Manager.

Adding a Taskbar layout with SSCM

Deploying a Taskbar layout during OS deployment with Configuration Manager is done exactly the same way as with the Start menu in Windows 10. You can simply add the information to the same .xml file that you use for the Start menu.

Here is how to deploy a Taskbar layout with SCCM:

We can also use a Group Policy to the Taskbar layout, which I assume will be the most used option because it allows you to change Taskbar configuration at any time. When the computer starts up, it will check if the .xml file has been modified and apply any changes.

Note that the Group Policy enforces the Taskbar/Start menu layout on user computers.

The .xml file is very sensitive to additional characters like an extra space at the end of a line. I recommend you try your .xml file as a local administrator with the PowerShell command explained above before you deploy it with Group Policy. If your .xml file contains syntax errors or illegal characters, you have the chance to get it right before you mess up the configuration on user computers.

PowerShell validates the .xml file and writes results to c:\users\Default\AppData\Local\Microsoft\Windows\Shell\LayoutModification.xml. This allows you to detect possible errors.