Microsoft kept its promise! The company has released Microsoft Virtual Machine Convertor (MVMC) 3.0 and included every feature the average IT professional needs to migrate to Hyper-V. In this guide, we are going to cover the new features in MVMC 3.0, any limitations for machine conversions, and a short walkthrough of a virtual machine conversion.

The biggest feature of MVMC 3.0 is physical-to-virtual (P2V) machine conversions. This feature, which has been on the wish list for a very long time, was expected in version 2. It is especially useful considering that P2V machine conversions were removed in the latest release of System Center Virtual Machine Manager. 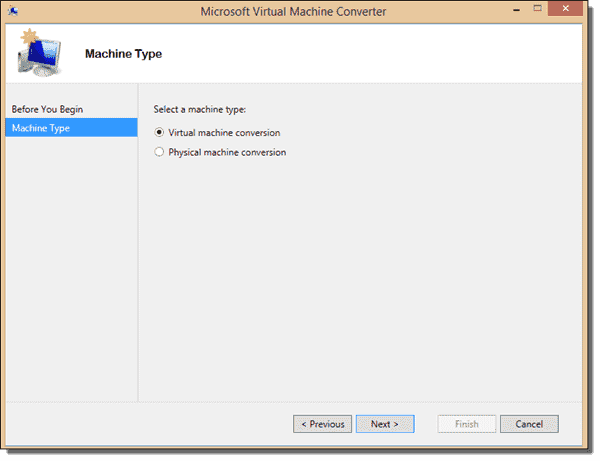 Conversions from VMware to Hyper-V or to Azure are a bit more lenient. The following table shows which OS conversions are supported.

The supported OS migrations and additional information can be found in the MVMC 3.0 Admin Guide.

The converting server (the one running MVMC) will need Visual C++ Redistributable for Visual Studio 2012 Update 1 and the BITS featured installed as well. After those prerequisites are met, MVMC 3.0 can be installed from here.

Microsoft Virtual Machine Convertor 3.0 can be launched from All Programs. It does require administrative permissions on the converting server to run. Begin the conversion process by choosing either a virtual or a physical machine conversion. In this scenario, the conversion will be for a physical server running Windows Server 2008 R2.

To connect to the source (machine that we are converting), we must specify our FQDN and an administrative user of the server. If the user is not local, be sure to specify a domain name with it. 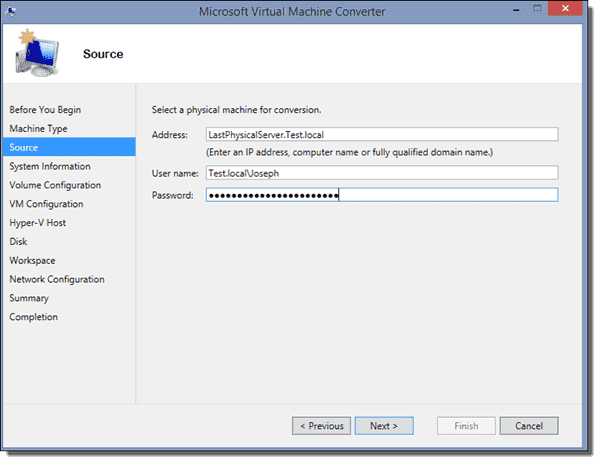 Although you can convert by IP, I had the best luck with the FQDN of the source server.

To retrieve the physical status of the machine, MVMC will install a small agent. If the installation was successful, the system information of the machine will be displayed (as seen in the screenshot below). 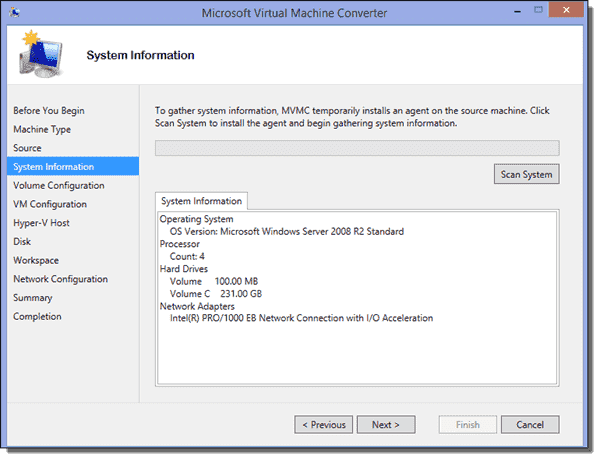 This system information scan with MVMC 3.0 was successful.

When the server has multiple volumes, MVMC will allow the conversion of all of them in the Volume Configuration pane. The next pane, VM Configuration, controls the Hyper-V name, memory, and CPU settings. Remember that the Hyper-V name can differ from the name within the OS.

With the source configuration specified, MVMC will connect to a Hyper-V host and will use your Windows credentials to connect. A successful connection will then prompt for a location to store the converted disk. Be sure that the server name in the path matches the Hyper-V host that was specified earlier. 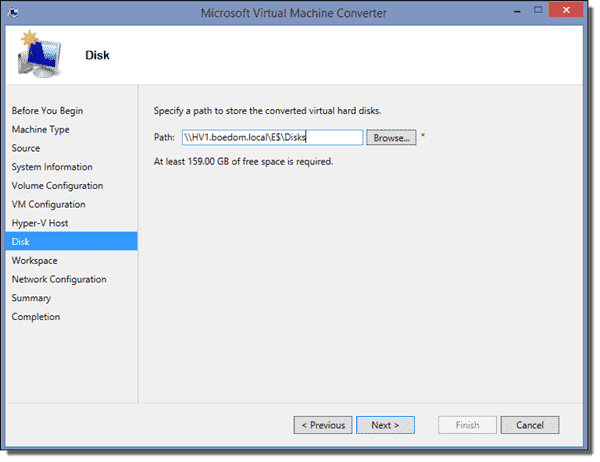 A red asterisk indicated an invalid path or a path that doesn’t match the Hyper-V host.

The machine running MVMC will need enough free space on it to store the VHDs while the volumes are being converted. This is specified in the Workspace pane and can include local external drives. Finally, MVMC will need to know if a network should be attached to the converted VM. As an extra precaution, I opted for no network connection. I prefer to manually add a connection later. The size of the source machine largely determines the time it takes to convert to a virtual setup. A detailed log is created in the event of an error.

Microsoft Virtual Machine Convertor 3.0 is a solid P2V tool for Hyper-V. Microsoft’s belief is that, by making MVMC a standalone product, MVMC will receive timely updates for conversions. For MVMC to remain relevant, Microsoft will need to release immediate updates when a new OS is released. I hope that future releases will ease the converting server requirements and improve conversion times.