Overview of the Task Manager in Windows Server 2012

Home Blog Overview of the Task Manager in Windows Server 2012

By the conclusion of this article you will have an excellent picture of what new capabilities exist in the Windows Server 2012 revision of Task Manager.

In Windows Server 2012 we can open Task Manager by using all of our previously known shortcuts. For instance, try either of the following procedures:

However, if you try to start Task Manager by typing Taskmgr.exe from a Windows Explorer, Command Prompt, or Windows PowerShell window, you will see the familiar application interface shown in Figure 1: 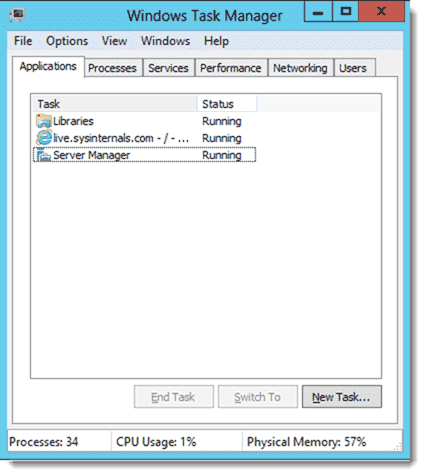 What’s going on here? As it turns out, the Windows Server 8 Beta build includes both the new and the old Task Managers:

My best guess is that Microsoft retained the legacy Task Manager in Windows Server 8 Beta in order to please us older Windows systems administrators who have become settled into our ways. On the other hand, this is a beta build and perhaps Taskmgr.exe will be removed by the time the gold master ships. Who knows?

In any case, I would suggest that you use Tm.exe when starting Task Manager from a command-line environment so you can take advantage of the new features.

On a tangential note, am I the only person who does not care for the Windows chrome in Windows Server 2012? The color scheme and control surface strike me as an adolescent’s concept of an enterprise server operating system UI. In point of fact, the Windows Server 2012 chrome reminds of (if you can believe it) the Windows 1.0 UI from 1985. See the screenshot in Figure 2 and decide for yourself: 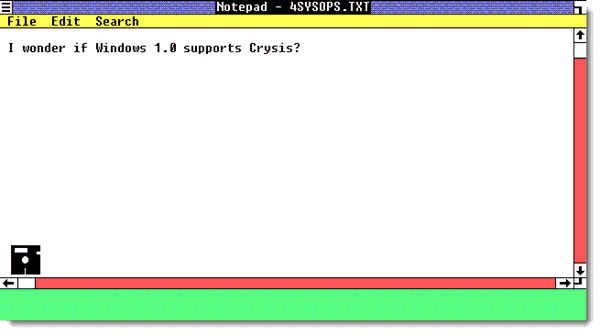 Enough with the history lesson: let’s fire up the new Task Manager and test its capabilities. We will adopt a (what else?) task-based approach in dealing with new features.

The Windows Server 2012 Task Manager defaults to a deceptively basic interface (see Figure 3) that simply displays running applications. As you know, an application is a foreground program that consists of one or more processes.

As can be expected, we can easily end tasks from this screen. A new and welcome feature, however, is the ability to open the file system location of a selected application. To do this, right-click the appropriate application and select Open File Location from the shortcut menu. 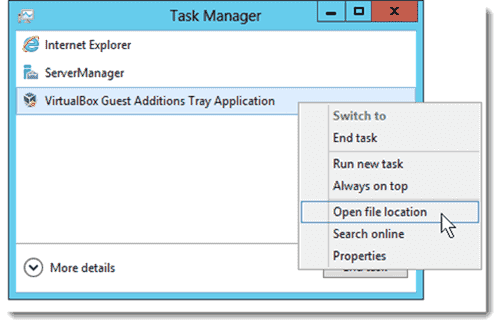 Click More Details at the bottom of the simplified Task Manager window to expand the view. We will need the expanded view to learn about the tool’s process, user, performance, and service capabilities.

In More Details mode you will see a Fewer Details button at the bottom of the window; click that link to contract the dialog box to its original size.

The Processes tab in the new Task Manager gives us more insight than ever before in terms of what running processes are active on our system and what metadata those processes generate.

Two elements in Figure 4 stand out for our consideration. First, notice the summary information at the top of each column. Note that we can get at-a-glance statistics regarding how much CPU and memory are being consumed by all running processes as well as by individual entries.

Observe also the red rectangle I added to Figure 4. In all previous incarnations of Task Manager, we were unable to decipher which services and/or processes were associated with Service Host processes. Until the Windows Server 2012 Task Manager, we were forced to use Mark Russinovich’s brilliant Process Explorer tool. Blissfully, we can now expand these host processes to reveal their precious cargo! What’s also cool is that we can see the security context in which each service host process runs. For instance, the highlighted process in Figure 4 is owned by Network Service. 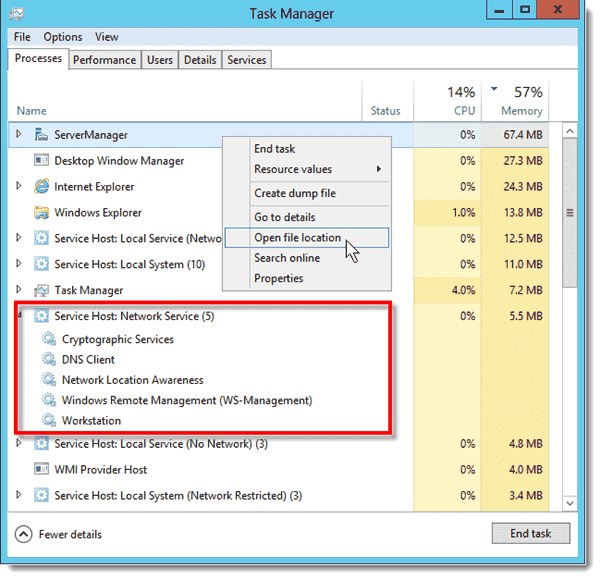 By right-clicking a process in the Processes tab and selecting Go to details from the shortcut menu, we are transported to the Details page, which provides us with even greater control over running processes. For instance, notice in Figure 5 that we can open the service’s file location and search online for information on that process. Again, these are features that we are accustomed to seeing in Sysinternals Process Explorer. I for one am deeply grateful that Microsoft rolled a lot of that functionality into the new Task Manager. 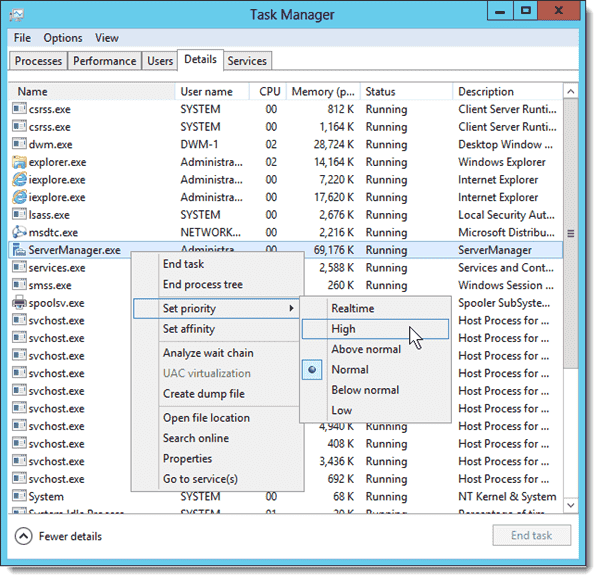 If we right-click a process in the Details page and select Go to service(s) from the shortcut menu, we are in turn relocated to the Services page. We shall deal with that page later on in this article.

Microsoft made some nice advances to the Performance tab in Windows Server 2012 Task Manager. For instance, we no longer have cryptic references to metrics like Commit Charge and paged vs non-paged memory that might be of interest to developers but are beyond the needs of the average systems administrator.

Instead, as you can see in Figure 6, we have a nice summary of current status for our three major hardware subsystems: 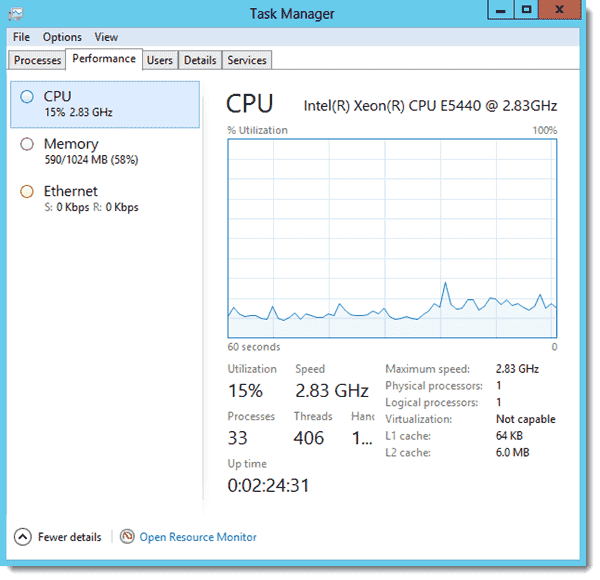 I particularly like the Up time metric on the CPU subsection. Handy information indeed!

Administrators who leverage Windows Remote Desktop Services will like the Users tab in the Windows Server 2012 Task Manager. Here we can see detailed resource utilization for all connected users. Moreover, we can disconnect those users from the system with a simple mouse click. 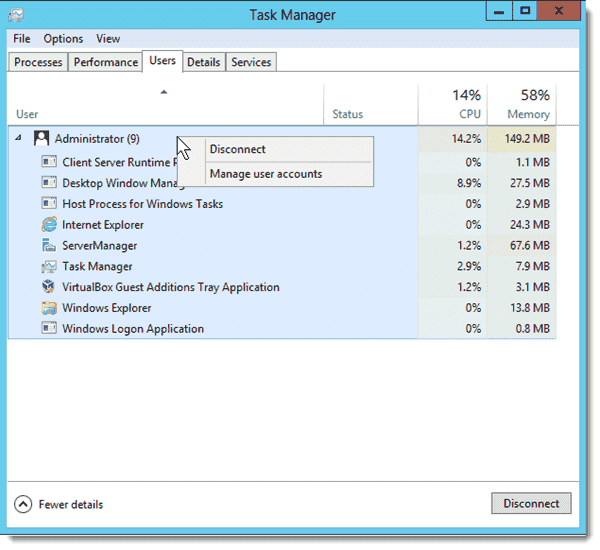 Finally, the Services tab in the new Task Manager gives us almost everything we might ever need to know with regard to currently running services. We can start, stop, or restart services from Task Manager, but we still need to open the Service Control Manager console in order to change service parameters such as startup type. As you can see from Figure 8, this is easily accomplished by right-clicking the appropriate service and selecting Open Services from the shortcut menu. 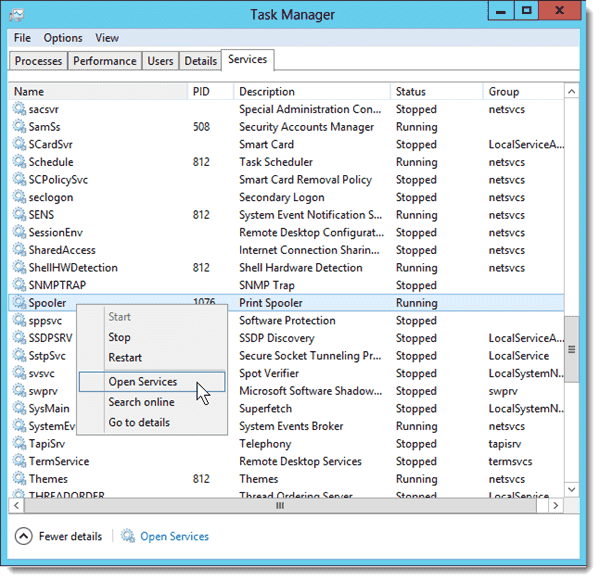 I hope that you are excited as I am about the Windows Server 2012 Task Manager. For my money, this tool can very feasibly replace Process Explorer and other third-party process management utilities.