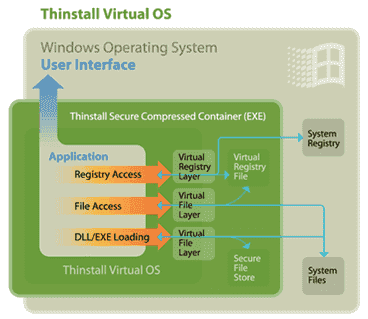 Wikipedia defines it application virtualization as “an umbrella term that describes technologies that improve application compatibility and manageability by encapsulating applications from the underlying operating system on which they are executed.” The main idea is to run programs in a virtualized environment on a desktop system.

Most reports I’ve read sound quite promising, but in my experience every new technology also has its downsides. On the one hand, it sounds great to install software on desktops without making changes to the underlying OS. On the other hand, I have doubts, because running programs in an environment for which they were not explicitly designed invites problems. Instinctively I try to avoid anything that deviates from the norm when it comes to IT. Anyway, application virtualization is a hot topic.

I am interested in this technology because we would like to deploy a large number of different applications to student PCs (Elearning, dictionaries, etc.). Many of these applications are from small vendors and are often buggy. Usually they have to be updated frequently. I am afraid that we mess up our desktops this way sooner or later. Application virtualization might be the solution for this problem.

In the next post of this series I will publish a list of all application virtualization solutions with a short introduction of all products.