Michael Pietroforte  Tue, May 5 2015Wed, May 6 2015  android, exchange, microsoft 365, office  10
A few days ago, Microsoft released the official Outlook app for Android phones and tablets. I tested the app and found some interesting new features.

When Microsoft bought Acompli last December, I reviewed the app and was wondering how such a relatively simple app could be worth $200 million. Thus, I was quite curious to see if Microsoft was able to transform the Acompli app into a tool that really deserves to be called “Outlook.” 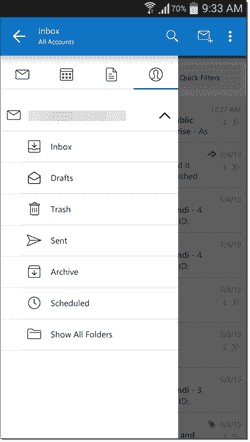 Microsoft indeed improved a few things. One thing is that connecting to Office 365 now works properly. Last time, I had to mess with the app for quite a while before I could access my Exchange Online mailbox. This time, I just had to provide my email address and my password, and Outlook started downloading my emails. 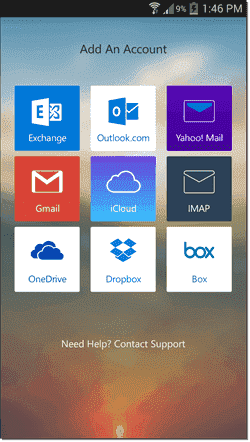 The inbox looks pretty much the same as with the Acompli app. Microsoft didn’t dump the Focused folder that I bashed in my last review. However, I have to admit that, this time, the app was better in distinguishing between important and unimportant emails. There were a few “false positives,” though, and I still found myself switching back and forth between the Focused and Other folders. I doubt that this feature can save you time. I am reading that Outlook 2016 will have a comparable feature. Let's see if this can be done better. 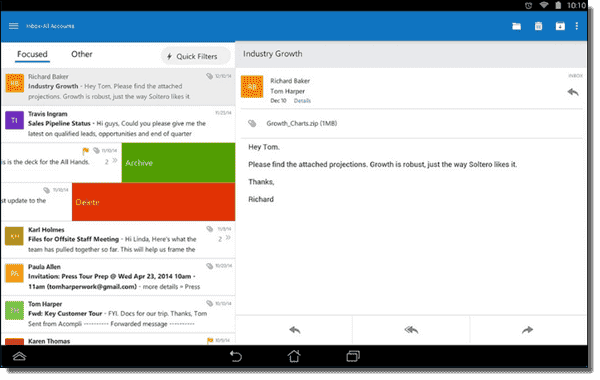 Microsoft Outlook for Android inbox on a tablet

Microsoft also managed to add a new bug. On my Note 3 with Android 4.4, text fields on various screens were cut off. 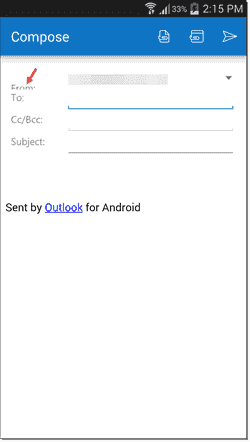 As you can see in the screenshot above, composing emails in Outlook for Android is rather spartan. There is no way to format your email.

For some reason, Microsoft hid one of the highlights of the app—that is, the ability to attach files from cloud drives. If you tab to the attach symbol, Outlook presents the three options Recent Files, Photo Library, and Take a Picture. However, if you added a cloud drive account to Outlook, you can then access these files if you tab to Recent Files. As with the previous version, the app doesn’t really attach the file; instead, it adds a “secret” link that points to the file in the cloud.

The rendering engine has definitely been improved. You can now zoom most emails, and the app is able to adjust line breaks, which allows you to easily read emails with small fonts. (I always wonder why most web browsers for Android can’t do this. The only one I know of is Opera. In my opinion, this is a must-have feature for any app that displays text on a mobile device.)

Flagging still doesn’t work accurately; that is, you can’t set a due date as in Nine. For me, this is a knock-down flaw. Anyone who works intensely with email and doesn’t use the My Tasks folders in Outlook for Windows, which sorts emails according to their due dates, wastes a lot of time. As expected, Outlook for Android doesn’t have a My Tasks folder. Nine does.

The mail notification settings of Outlook for Android are still very primitive. You can only choose between All, Focused Only, and None.

The Contacts app has some interesting features. I am unsure if I missed this last time or if Microsoft added these features. Each address book entry has three tabs: Mail, Meetings, and Files.

The Mail tab lists all emails that you exchanged with this person. It seems the app doesn’t just use the “from” field for this purpose. In my test, it also added emails to the list that contained the name in the message body. What I really like is that it also adds your own last sent email to the list. Outlook for Windows doesn’t do that, and I often miss this feature.

The Meetings tab is one of the features that shows that Outlook doesn’t want to be just another email app but intends to become a real Exchange client. I also like the Files tab. It lists attachments that you received from the person. How I’ve longed for this feature in Outlook for Windows.

It’s also good that the app only displays fields with entries. Most contact apps I know also present empty fields, which means that you often have to scroll down before you reach the field you are looking for. Not so good is that Outlook doesn’t show some fields that contain content, such as the web and IM address. In my test, the app displayed the contents of the Notes field several times. Another bug. 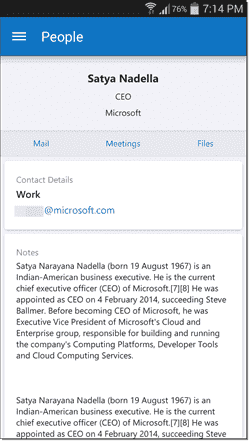 Unfortunately, Outlook for Android doesn’t allow you to edit contacts.

The calendar app is relatively simple and is probably no match for the one that came with your phone or tablet (S Planner, for instance). Calendar entries are displayed in an endless list, and you can select particular dates in a monthly calendar. That’s all. 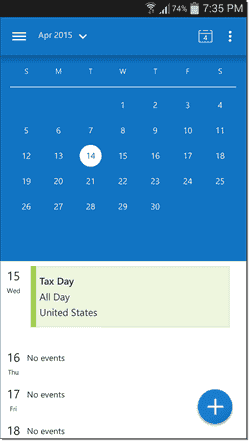 Outlook for Android supports meetings, and you can accept and decline meeting requests. I am unsure, though, if this strategy would work with the event displayed in the following screenshot. And, trust me, I am not the organizer of this event. Outlook must have misunderstood something here. However, the number of displayed attendees seems to be realistic. 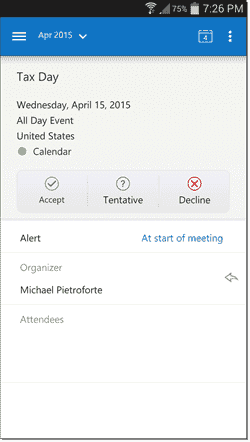 The app tested in this review might now be the “official” Outlook for Android. However, it still lacks a plethora of features to deserve the name “Outlook.” I think I neglected to mention that it doesn’t support tasks and notes. In my view, Nine is still the “best” Outlook for Android. Nevertheless, I am seeing some improvement compared to the Acompli app. After my last review, I uninstalled the app right away. I guess this time I will keep it. Some features, such as attaching a file from the cloud to an email or quickly listing the emails of a particular person, could prove to be useful occasionally.