Kyle Beckman  Mon, Jul 7 2014Wed, Jul 9 2014  cloud computing, microsoft 365, office  1
OneDrive for Business is an Enterprise IT–managed document library that can be accessed via the web, accessed via Office applications on the desktop and mobile, and synced to devices. In this series of five parts, I will review Microsoft’s cloud drive in detail. Today’s post gives an overview.
Contents

File synchronization is the ability to have access to your files anytime, anywhere, across any device. It’s one of those must-have, killer cloud services that your end users can’t live without. As a matter of fact, your customers aren’t living without it, are they? They’re probably using it already in the form of shadow IT, potentially skirting your company policies and generally causing headaches for IT. But your customers probably don’t call it “file synchronization,” do they? They know it by another name: Dropbox. OneDrive for Business is Microsoft’s answer to cloud services like Dropbox, with the important distinction of being under the control of IT.

OneDrive for Business is part of Office 365 (in the cloud) or SharePoint 2013 (on premises). OneDrive for Business originally started as SkyDrive Pro, but it was renamed after a lawsuit brought by Sky Broadcasting Group in the UK. In my opinion, the “for Business” moniker seems to create even more confusion than “Pro” in the original name. I’m not sure why Microsoft didn’t go for a completely different name for their Enterprise product and drop the “OneDrive” name. “OneDrive for Business, Education, Non-Profit, Government, and More” isn’t taken but (if I had to guess) is probably a little on the wordy side. 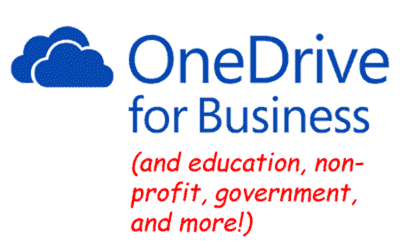 What’s the technology behind OneDrive for Business?

OneDrive for Business is actually part of SharePoint; it is a document library inside of a SharePoint My Site. It is built on a completely different technology than its sister product for consumers, OneDrive. The two are really only related in name; on the backend, they’re completely different. The upside of being a fully functional SharePoint document library is that you get all of the functionality that comes with a document library. Users currently receive 25 GB of storage but will be upgraded to 1 TB in the near future.

Even though the two run on different technologies, they can still coexist. Users can keep work files in OneDrive for Business and their personal files in OneDrive on the same system. The name similarity I mentioned earlier could, however, cause some confusion for end users, especially considering that the two use the same icons. 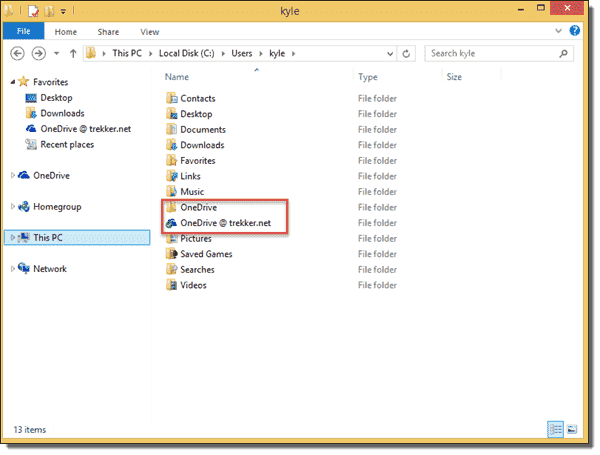 OneDrive for Business and OneDrive

How do I get OneDrive for Business?

Many organizations already have existing Exchange and/or SharePoint infrastructure and may not be ready (or willing) to move to Office 365. OneDrive for Business is also available as a separate service that can be used standalone or tied to your on-premises SharePoint 2013 in a hybrid setup. The standalone version can be purchased for $2.50 per user/month, with additional storage costing $0.20 per GB.

Once you’ve purchased your Office 365 licenses (or standalone OneDrive for Business), users can be enabled in the Office 365 Admin Center. In Users and Groups, click any user and ensure that the user has SharePoint Online enabled. 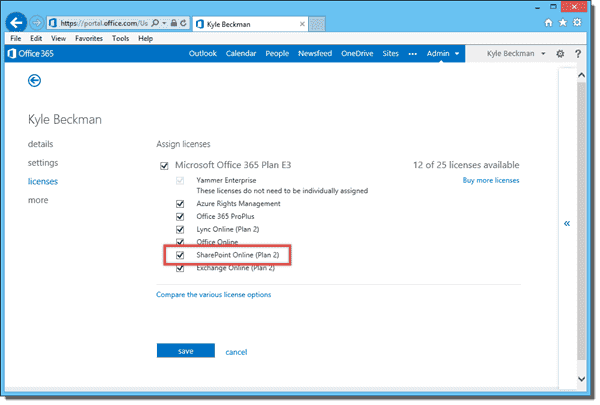 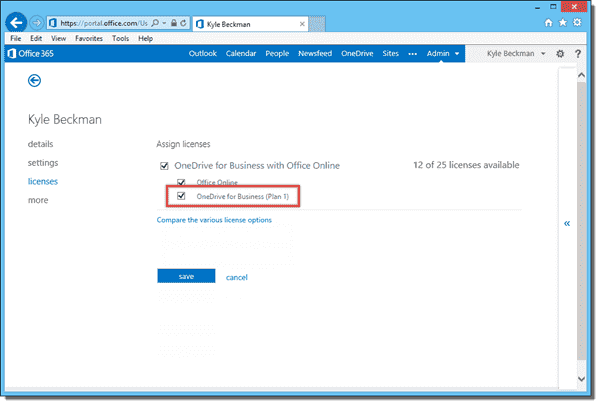 OneDrive for Business Plan in Office 365

In my next post, I will describe how users can access their files in OneDrive for Business.