Brandon Lee  Mon, Apr 5 2021Tue, Apr 6 2021  exchange, security  0
Microsoft has released the One-click Exchange mitigation tool, a new utility to respond to the recent zero-day vulnerabilities found in on-premises Exchange Server versions. What is this tool? What are its requirements and how do you run it?
Contents

Early in March 2021, four zero-day Exchange Server vulnerabilities were disclosed for on-premises Exchange Server versions, including Exchange 2013, 2016, and 2019. What is worse, the vulnerabilities have been actively exploited by nation-state threat actors in a large-scale attack against organizations running these versions. Microsoft has released emergency patches to mitigate the vulnerabilities. Recently, they also released a "one-click" Microsoft Exchange On-Premises Mitigation Tool—March 2021 to help customers apply the necessary mitigations.

The current recommendation from Microsoft is that organizations update their on-premises Exchange Servers as quickly as possible as they have released updates that mitigate the vulnerabilities as part of the above CVEs. However, there may be organizations that have little or no on-site IT staff, or companies that do not have a maintenance window for a period of time.

Microsoft realizes the conundrum that many businesses are finding with the current zero-day patches and the challenge of patching their on-premises Exchange Servers. With this being the case, Microsoft has been steadily releasing PowerShell scripts to help put mitigations in place against the vulnerabilities until the servers can be properly patched. This culminated with the release of the Exchange On-Premises Mitigation Tool (EOMT). Microsoft now recommends the EOMT over the previously released PowerShell scripts to put the mitigations in place. What is the EOMT? How do businesses use it to ensure their unpatched Exchange Servers have the mitigations in place to protect against this latest threat to on-premises Exchange Server hosts?

The EOMT is a fully automated "one-click" approach to configuring the recommended mitigations for the zero-day vulnerabilities and also scans Exchange Server with the Microsoft Safety Scanner. With the new tool, Microsoft is helping to consolidate the necessary tasks in an automated fashion to ensure the mitigating actions are introduced correctly and with little room for error. This certainly helps SMBs and even small environments that may find managing and patching Exchange Server to be challenging. The EOMT tool is a PowerShell script that brings together these various functions and tasks in a single script. It performs the following steps on your on-premises Exchange Server:

As noted with this comparison, the one-click Exchange mitigation tool in the form of the EOMT.ps1 file is a much more proactive tool and takes steps to determine whether the Exchange Server has been compromised in addition to introducing the URL rewrite for the CVE-2021-26855 mitigation.

First, how do you obtain the EOMT? Microsoft has made the tool available through its Exchange Security GitHub page:

What are the requirements for running the EOMT.ps1 utility?

After downloading the one-click EOMT.ps1 script, open up an Administrator PowerShell prompt and simply run the script. The output will look like the following. Notice it runs the steps listed above:

The following are screenshots of the tool as run on a new Exchange Server 2019 in a lab environment. The server was never exposed to the Internet. However, I purposely chose the Exchange 2019 Cumulative Update 8, which was released last year, so it would be behind on patches. As you can see, the IIS URL Rewrite configuration was applied to the server since it does not have the most recent patches applied. 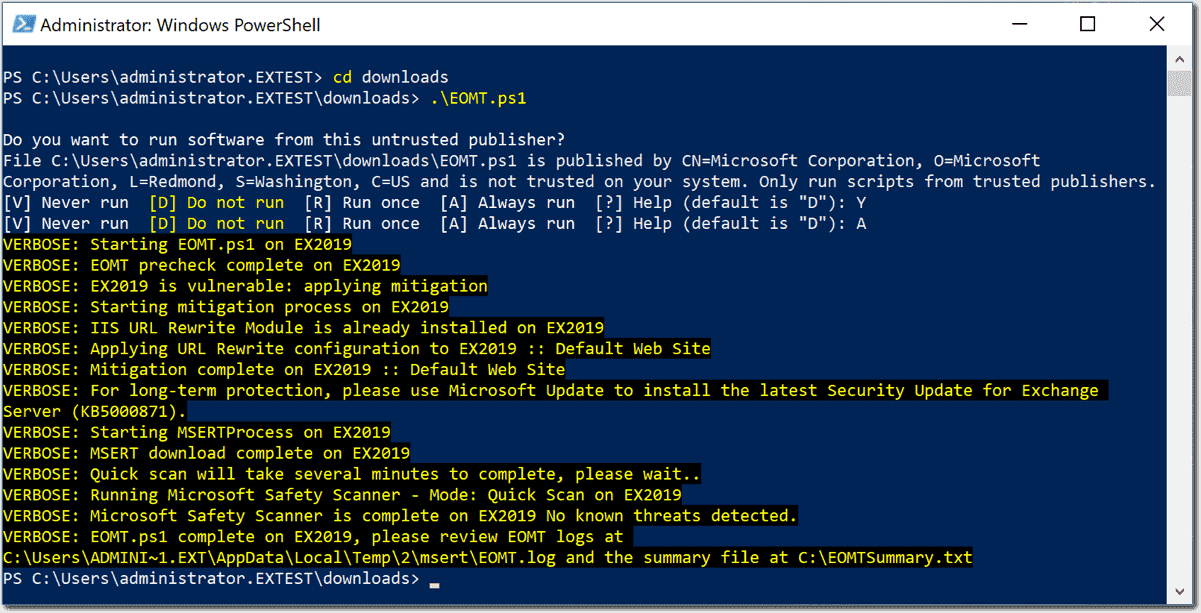 The EOMT.ps1 summary log is written, which displays the activities of the tool and tasks performed: 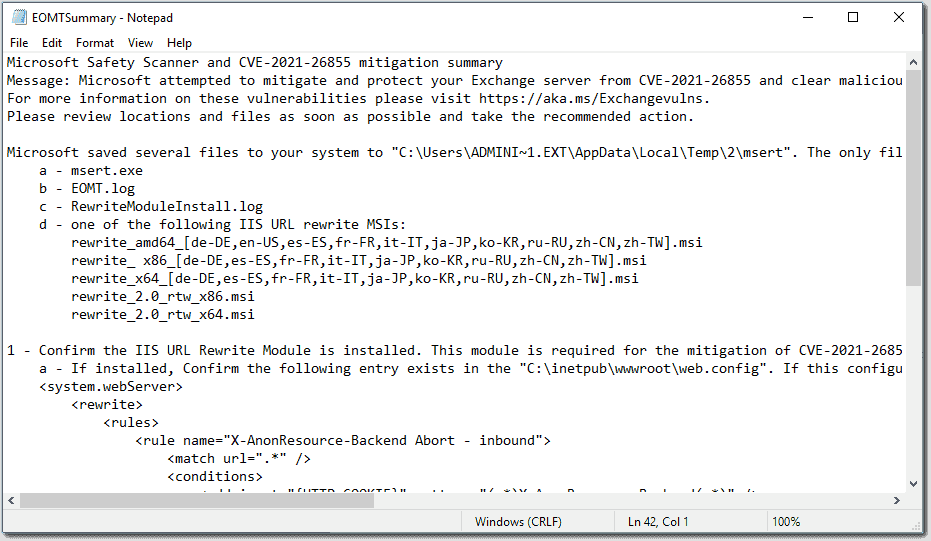 In addition, the tool writes the Microsoft Safety Scanner log file at C:\Windows\debug\msert.log. 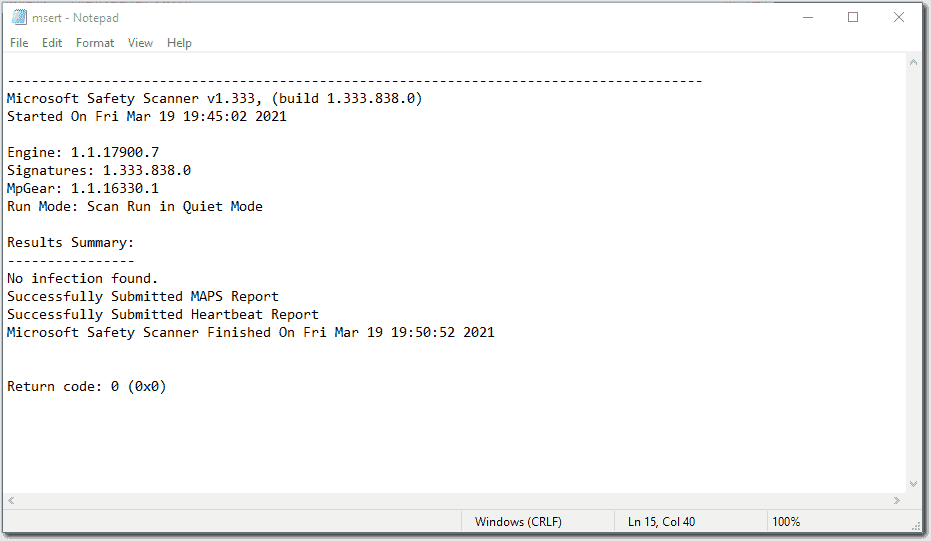 The recent on-premises Exchange Server vulnerabilities have created challenges for organizations that may not have dedicated IT staff, including some SMB and small businesses. For those and even for large companies that have to wait for a scheduled maintenance window, Microsoft has created the new EOMT, which provides an easy "one-click" approach to applying the needed mitigations to Exchange Server.

Also, the new tool proactively scans Exchange for evidence of compromise or other malicious activity using the Microsoft Safety Scanner. It is interesting to see this is an officially supported tool from Microsoft to help close the gap and protect Exchange from the recently disclosed vulnerabilities. However, Microsoft recommends applying the needed patches as soon as possible, even if mitigation is applied.