Paul Schnackenburg  Tue, Aug 16 2011Tue, Aug 16 2011  cloud computing, office  0
We’re now up to the seventh part of this eight part article series on Microsoft’s Office 365 and here we’ll look at Lync Online and its capabilities. Instant Messaging and how it can be federated with users outside your business is explored as well as how video and web conferencing works, which clients are available, necessary network configuration and how Lync Online is administered.

Lync 2010 is Microsoft’s enterprise voice solution and on premise it offers IM, presence, video conferencing, VOIP as well as phone integration and even the ability to completely replace internal PABX systems. In 0365 Lync Online offers most of this functionality with the ability to connect phones and calling ordinary phones sadly missing. Presence information for co-workers is displayed in Outlook, Office, SharePoint and OWA and there’s “click to call” integration.

Today there’s no Lync client for your smartphone but an app for iPhone, Android and Windows Phone 7 is coming before the end of the year. Just like most other IM clients you simply search the directory to add buddies and their presence is displayed. Unlike Live Messenger and Facebook this presence information is gathered from your Outlook calendar as well as when you manually set it. The Lync client is a separate installation to Office Pro Plus and you need to run the Desktop Setup tool after its installation to configure settings. There’s also a Lync Web App (LWA) that is supported in IE, Firefox and Safari which requires Silverlight. LWA offers IM and desktop sharing but there’s no audio and video support. 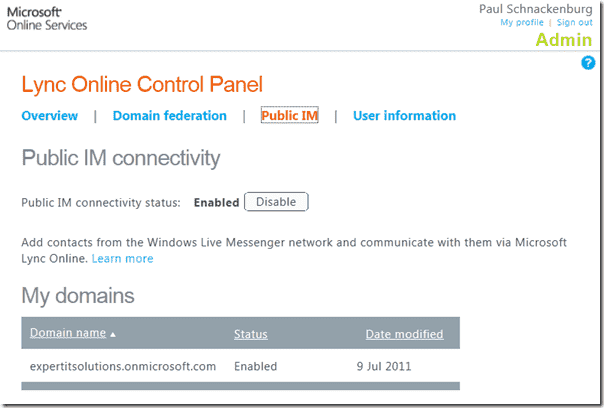 Setting up IM federation in Office 365 is easy but we’re waiting for integration with more IM networks.

Another popular feature is web conferencing or one to many presentations, these can be scheduled or ad hoc and the maximum amount of attendees is 250. Meeting invitations include the link to the Lync 2010 attendee client for Windows, other platforms can use the web based interface, there’s a Mac client coming “very soon after launch”. If you need to use phone dial in audio support for public webcasts several third party services are available that support Lync Online.

Your corporate firewall needs to have outbound port 443 (for the STUN/TCP and PSOM/TLS protocols), 3478 (STUN/UDP) and 50000-59999 (RTP/UDP) open, as well as allow outbound connectivity to the *.microsoftonline.com, *.lync.com and *.outlook.com domains. Further if your firewall blocks access to public SRV DNS records the Lync client will fail to connect. There are two ways to fix this; one is to create a public global DNS Cname record that points to the 0365 Lync service, this will work for both internal and external clients. The other alternative is to create an internal SRV record.

Administration is done through the Lync Online Control Panel. You can control access to audio, video and IM file sharing on a per user basis. The limitation when Lync online doesn’t offer audio/video capabilities due to local laws in some countries is based on each users location, not the tenant location.

For those businesses that would like outbound calling to phones from Lync third party services are available that integrate with Lync Online. There’s no archiving of IM in Lync Online, this is available in Lync on premise and could be a deal breaker for some businesses that require it for compliance regulations. 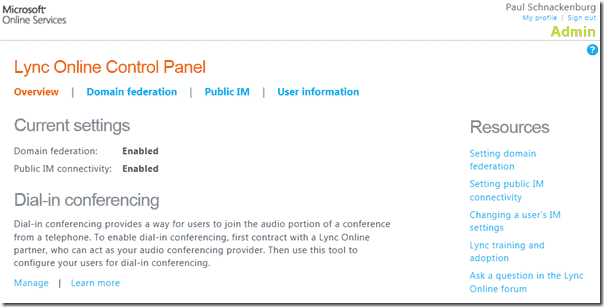 Management of Lync Online is a simple affair, mostly because compared to Exchange and SharePoint, Lync doesn’t have the same feature parity with its on premise brother.

In the next and final part of this series we’ll look at SharePoint Online, what’s different compared to SharePoint on premise as well as a concluding look at Office 365 compared to Google Docs and cloud services in general.